For sure! This one has a dip stick to check level.

Assuming your Webers are new I should think it quite likely they were sourced from Webcon and specified for a 4.2 XK engine in standard tune so they should be good to go.
At £2k including manifold they are a considerably cheaper option than a new set of SU’s at £5K (or £3K used if you can find them).

My 69 OTS went very well on XK specified Webers, the only downside being a pop and phut on a light throttle at low RPM and 13MPG when driven as intended. Three separate Weber tuning specialist concurred that these characteristics were typical of Spanish as opposed to Italian manufacture and whilst it may be possible to correct the ‘pop and phut’ by adding another progression hole it was far from a guaranteed fix.

My ultimate solution was to spend £5K on fuel injection (Emerald ECU and Jenvey throttle bodies).

With regard to the breather arrangement, I fitted a catch tank (Amazon £23) – see pics 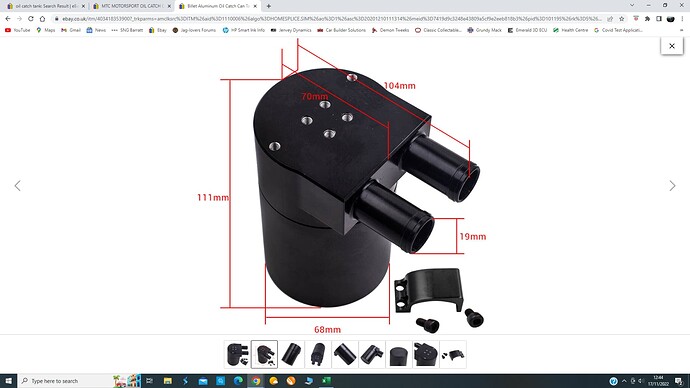 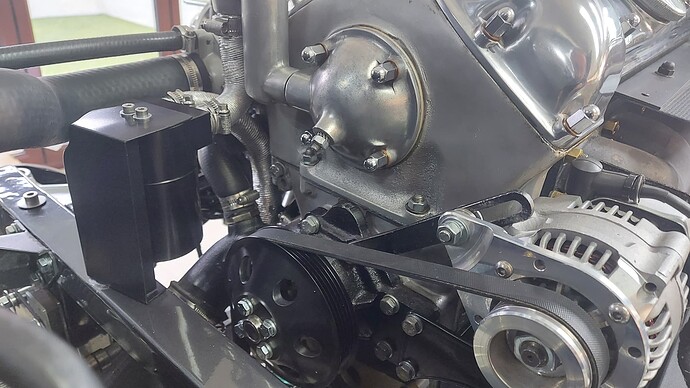 I believe my Webers were from a kit provided by one of the usual Jaguar parts businesses. The manifold box had a Moss sticker on it. I’m therefor assuming the Webers came with some standard jets, plus there are two bags of different jets included. Your catch container looks just like the one I ordered from Amazon. Now I have an idea on how and where to mount it! Thanks!

Sounds like a different package to the kit I bought Bob so you may well require the help of a Weber tuning specialist.
Catch tank is very similar but doesnt have filter or the dip stick - a very useful addition.

It does take an analytical mind to get the calibration right, and I found it better (cheaper, faster) to do it myself rather than take it to shop.

It should only take about 3 iterations to get things dialed in, assuming you can find some guidance on an initial setting

I was thinking about this topic last week while wandering around a JDM car gathering. I walked past Datsun, after Toyota, after Nissan running on DCOE Webers, or their Mikuni cousins. As a rule, the cars seemed to idle like sewing machines, then pull away, and rev-out cleanly.

It seems like a vast majority of the time this topic comes up in the context of E-types, Webers get ‘horriblized’ to death….I have a sneaking suspicion it’s mainly because they aren’t (gasp) original.

.I have a sneaking suspicion it’s mainly because they aren’t (gasp) original.

You miiiight be onta sumpin…

Alfas came with Webers, pre-SPICA, and they ran and idled fine.

And by ‘original’ I hear you saying ‘well calibrated’, as in someone spent a great deal of time trying all the probable variations of chokes, jets, and air bleeds to get them dialed in.

Webers and their copies/clones really are beautifully capable devices that can deliver near fuel injection levels of performance and smooth running characteristics. But only in the right hands. And therein lies the problem.

For some reason I’m reminded of Clarkes third law:
“Any sufficiently advanced technology is indistinguishable from magic. ”-Arthur C. Clarke

Webers and their copies/clones really are beautifully capable devices that can deliver near fuel injection levels of performance and smooth running characteristics. But only in the right hands.

I could not agree, more, and the pool of people who are capable of doing that is getting smaller and smaller by the year.

I could not agree, more, and the pool of people who are capable of doing that is getting smaller and smaller by the year.

Undoubtedly true that it’s getting smaller, but it’s a long way from dying out completely. There’s a guy in the Orange County area who seems to tune a HUGE percentage of the aforementioned JDM cars out there…he can’t be over 40.

At some point in the not too distant future, we’ll all be dependent on a handful of specialist who work primarily by mail-order. They’ll get the stuff close, and then provide detailed instructions on how to do the rest yourself….I believe that’s how Jim Inglese already works on his V8 Weber set-ups. 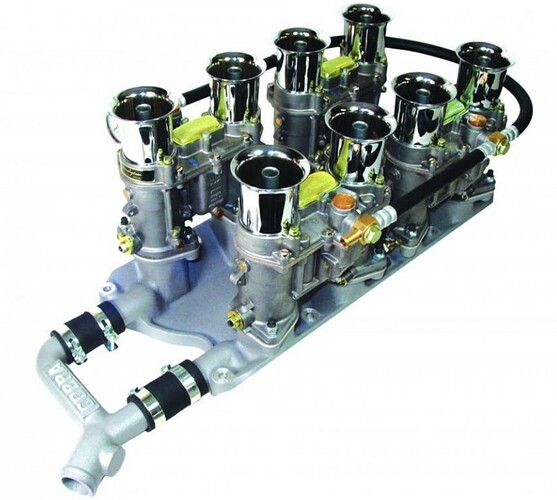 I have 3x Webers on my’71 series II. The secret sauce to getting them set-up that has worked for me for 10+ years…and believe me I am no mechanic…I bought the book " Weber Carbs…tuning and set-up" and watched the U-Tube video, and got one of those air balancers you stick in the trumpets…and turn the appropriate idle, mixture adjustment screws…and voila…runs and sounds great. Maybe I was lucky and had the correct needles, jets etc all along. I clean them 1x per year, I had an Austin Healy with 3x SUs…the Webers are no more difficult in my experience.

Maybe I was lucky and had the correct needles, jets etc all along.

If it all worked well from initial conditions, and you didn’t change all those parts, yes, you did!

I had an Austin Healy with 3x SUs…the Webers are no more difficult in my experience.

I have setup plenty of both, and with the correct amount of the variable bits and pieces, yes, Webers can be setup. However, I have never felt that they were “as easy” to set up as the SUs.

Thanks for your reply…I enjoy following your commentary, wish I had your knowledge. Best wishes for the new year…here’s to smooth idle and acceleration!

Best wishes for the new year…here’s to smooth idle and acceleration!

May all our mixtures be good, our timing spot-on, and our rear ends be well-geared!

May all our mixtures be good, our timing spot-on, and our rear ends be well-geared!

Bob,
I have triple 45 DCOE Webers on my ‘69 e-type FHC. My intake manifold is the same as the one Bruce has on his, so no sense duplicating similar pics of hoses.
My breather hose also exits to atmosphere, as someone mentioned all cars did before PCV. It drops down the front of the engine, rides along the torsion bar just past the oil filter, held on by plastic zip ties, not too tight. Can even point it toward the ground. Engine is a complete rebuild by a machinist & doesn’t have that dirty blow by.
I love the Webers. Perhaps yours are jetted correctly. They are not something done purely by trial & error. Buy the following: Weber Carburettors, John Passini;
How to power tune a Jaguar XK, Des Hamil, & The Weber DCOE Manual. They all eventually say the same things, but in different detail. Reading from the 1st 2 books will make your head spin. Bite off smaller pieces. O.K. to read W/O comprending. Eventually, you’ll get the picture. Start W/ the DCOE manual to understand the parts, simpler.
Everything everyone says on this site is true- the good & the bad.
But when you get them right there’s a magic there. Nothing sounds like them, nothing feels like them & nothing looks like them. Nothing will remove that smile from your face.
I wouldn’t run the car W/O air filters on the velocity stacks as much as one might want to. We had my car set up pretty well, but approaching & going beyond 80m.p.h. the engine started a flutter. I live in Ct. near Jim Inglese, Weber guru for Cobra & Chevy & brought the car to him. First he worked the linkage. Then started on the guts. He spent more time on emulsion tubes than anything else. Then: “I’m out of tricks. This makes no sense”, as he shook his head, stopped & said “what’s that?” Pointing to the open air box running the length of the bonnet that feeds the 2 tubes on the air filter/tank to the Strombergs, now gone. “There’s the problem”. That air is passing so fast across the Velocity tubes it’s disrupting air pulling it out of the carbs. Jim is now in Florida.
Also, one dusty day can hurt the innards of the engine, valve seats, piston walls, etc.
In the days before fuel injection Webers we’re king & on Ferrari & Lamborghini. But open their hoods & there are 6 of them!
A must purchase after the books is a Synchrometer- Carburetor Flow Meter. Any of the 3 big Jag parts places has them.

Bob,
Look at Bruce’s picture. He also has a fuel pressure regulator mounted on the firewall. Absolutely necessary. If I remember correctly 3 to 3 1/2 lbs max pressure.
Michael Caro

Thanks for all of the excellent tips! I have the Hamil book and will study it again. Also, the fuel pressure and airflow issues were unknown to me and will be dealt with. Again, thank you for the help!

PS: I added this catch can arrangement after seeing several similar examples online. 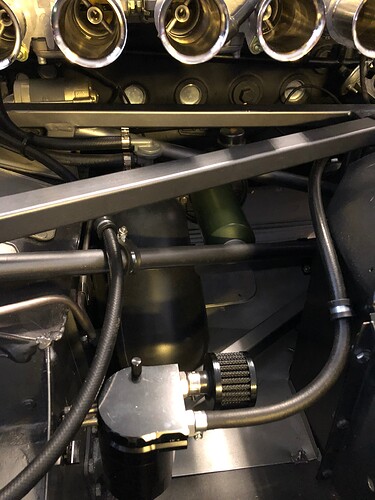 I like it bob. I added mine about there too under this aluminum panel I made 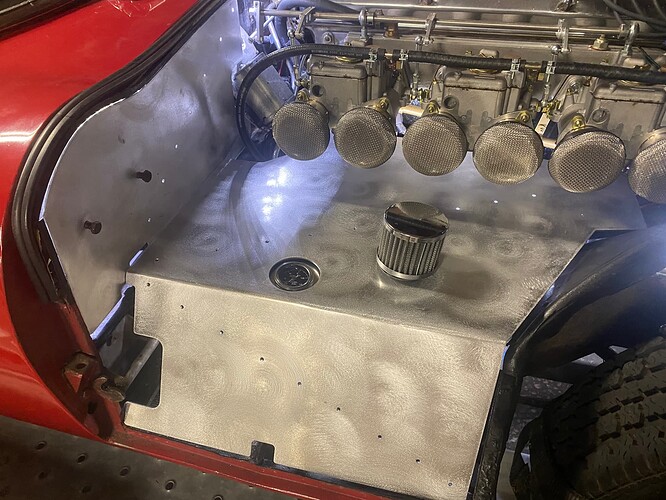 NICE panel, James. Folks on this site are so creative.
Your “catch cans” seem to be exactly the same piece I use as a breather on a custom Harley Davidson.
B.T.W. When my 4.2 engine was rebuilt (after the 1st meatball screwed it up) the block was bored .030 over & XM-2 Iskenderien cams installed. Recommended by
a friend ,Jim Rickel, who guided my machinist in Ct. This was 15 ? yrs ago. Jim is long gone. A gem.

Very clean set with that panel James. Also a nice clean firewall cover I assume? I can’t tell you how many tools, screw, nuts, washers I’ve dropped down there near the vacuum tank. Are those panels final or did you have them painted or powder coated?