It has developed a terribly annoying high pitched “whoo” sound around 3000 rpm. (and only at that rpm). After checking around I’m almost positive the pita sound is coming from the engine driven cooling fan.

So my question is … to troubleshoot this can I grab the fan blade and stop it while someone starts the car and runs it up to 2000 rpm without cutting my fingers off? Quick and easy

Remove the fan belt … too much work

Remove the fan … again too much work 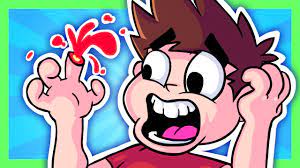 but none connected to the engine …

Are you serious?!!! In the end it’ll be a lot harder to remove the belt without fingers or possibly a hand or two.

If it has recently begun the noise, look for a damaged blade, Cracked fan hub, blocked airflow such as the flaps not opening which might cause change in conditions. Something causing a strain as the fan gets up to high speed.

Oh and remove the deer whistle from in front of the rad.

hub, blocked airflow such as the flaps not opening which might cause change in conditions

Those only come into play at speed, they should be closed when the car is stationery.

I was assuming he was moving not stationary when he was first noticing the noise. But you are definitely correct.

to troubleshoot this can I grab the fan blade and stop it while someone starts the car and runs it up to 3000 rpm without cutting my fingers off? Quick and easy

Spray bottle of water? A squirt of water at various spots along the beltway to see when goes away?

The noise isn’t the typical “screeching” sound you get with a slipping belt but thanks for the tip, I’ll rub some non-slip on the two belts and make sure they’re both properly tight.

It sounds like the noise is coming from the bearings in the engine driven cooling fan. If I can just stop the fan from spinning for a few seconds while I get the rpm’s up to 2,000 I’ll be able to see if the “whooing” goes away and confirm that.

My money’s on bearings, fan or other ancillary.

Remove the fan belt … too much work

Remove the fan … again too much work

ALERT!! Groove, someone has hijacked your Jag-lovers account. A man that has added steering wheel controls for his stereo would NOT think removing a lowly fan belt “too much trouble”!

Funny you should bring up my steering wheel stereo controls mod … 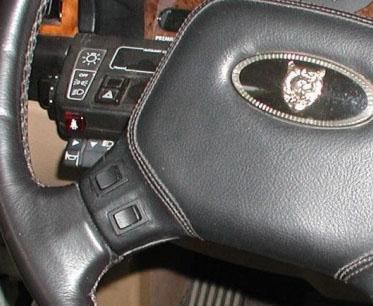 I was just riding around this afternoon listening to music and thinking how much I LOVE not having to reach down to change the volume or song selection (which I’m constantly doing). That’s just something that has dramatically increased the joy of my driving experience

The sound is very very intermittent and only seems to happen with the car warmed up and the rpm’s around 1500 - 2000. When it occurs, with the slightest throttle movement the sound disappears,

If i remove the fan belt I’ll loose both the water pump and the alternator so I won’t be driving around very long like that. Even though it’s a bit of a fiddly job I thing the best move will be to remove the fan/clutch and bolt down the water pump hub and take it for a spin.

Take hound dog out of backseat… sorry had to check…

Take a copper house wiring 14GA bare copper wire without vinyl sheath… put a J hook on end… know rotation of fan----grab end of fan blade and anchor other wire end somewhere sturdy… I suspect it will be strong enough to stop fan from rotating and if not the copper end would straighten out and not damage anything. Start car … turn off if bad juju happens… i suspect this will stop fan rotation even at higher revs, but do a short test…
Good Luck
Brad

Whenever I do something like this I always say to myself … "Hey, what could possibly go wrong

Bur I believe fortune favors the bold so I’ll try it tomorrow.

Bur I believe fortune favors the bold so I’ll try it tomorrow.

Not so fast. A ballon pilot once told me as we were waiting for winds to subside, “ There are old pilots and there are bold pilots, but there are no old, bold pilots”

I once had the fan clutch on my less than 65,000 mile XJ6 seize up and at higher engine speeds over about 2500 RPM the fan would make excessive noise. It would also cause the belt to slip sometimes due to the drag. Is your fan clutch free when the engine is stopped?

Assuming the fan frees spins not “dry” or seized frozen or locked, and feels like there’s OIL inside the housing, smooth rotation, and no noises when hand spinning…but yes as soon as car is started if there’s any squealing noise at idle…as the fan will be not rotating… squealing may be due to silicone fluid leakage or lack therof although the back of the fan clutch would be oily messy with leakage fan clutch as a tell tale sign… turn off ignition. Also maybe a cord wrapped around the housing of fan clutch (may not be possible) and pull to spin it like a lawn mower one might hear if its an internal fan clutch problem. As always proceed with caution. Jags can bite.

If your dog is missing, check the trunk /boot.