Trying to find my grandpa’s Jaguars

Trying to find my grandpas jaguars, xk120 Car number 672694 and xk120 silverstone car number 660741 LT3. Any help finding the current owners would be great. I have the warranty paperwork, pictures, a few stories and a letter from Sterling moss about racing preparation and strategy. Regarding the silver stone I’m sure the current owners would like to get some of this history. 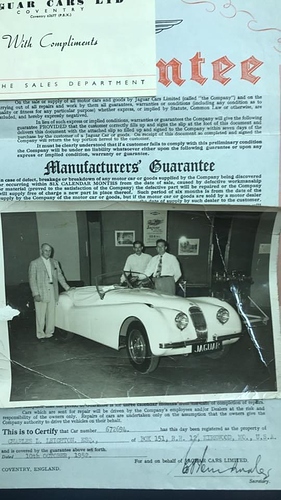 See my reply on your previous thread.
So present owner of LT3 is (afaik) still Tom Hendriks in Washington.
I don’t believe there is a direct connection between (the late) Sir Stirling Moss and your granddads LT3. Paul Wigton knows everything about Stirling Moss’ relation with the sister car LT2.

I have a letter written to chuck and the boys from sterling moss in England dated 1953 regarding race preparations and strategy. That’s my grandpa buying his first 120 in the clayrich motors showroom where he was service manager. He is standing in the middle.

Hi Blake, I think Terry might be right about the ID of the car pictured - which looks white with a white tonneau cover, rather unusual. I cannot see vents in the side of the front mudguards, which would place the car rather earlier than your grandfather’s car - maybe a publicity shot for Clayrich? The number quoted on the Guarantee form for your grandfather was as you say 672694, and that was a Birch Grey Car with Red interior and French Grey top,which is I not what I see in the photo. So no clear identification of the car in the photo. Do you have any other documents / photos? - John E

One more fundamental point: 672694 was in fact S672694 i.e. a Special Equipment car which would have had wire wheels - which the car in the photo does not have. - John E

HI Blake, I’m the daughter of Tom Hendricks. Would love to connect with you. Julie

Didnt your Dad own one of the LT cars?

Yes he owns LT3. Would love to get info on the car: pictures, stories, etc.

I’ve a number of pictures of LT3 , a.k.a. Phil Hill’s car. I’ve added the very first picture I have (dated 1951) and the last one of your fathers car in 2001.The complete story of LT3 has been documented.
If you send me your email address per Private Mail, I’l send you a PDF with the story I have on LT3. It’s unfortunately not possible to put such a large file here. 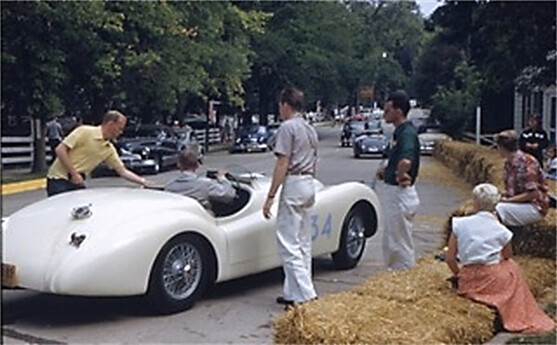 Not absolutely sure, but the fellow in the white hat might be me.
That’s at the national Jag show in Franklin Tennessee in 2001, with the really cool Jags arranged in a circle around the Civil War memorial, Confederate of course. Fangio’s C-Type was there. My 120 was on one of the side streets.

Found this article as published earlier on this website. Like you say: there were a lot of interesting Jag’s there. See the list at the bottom of the article.
https://www.jag-lovers.org/xk8/cdreunion.htm

Did you receive my email? If not, it may have landed in your spam box.