I’ve had a private offline message asking about a registration QFJ 237 on a Mark V.
From what I’ve been able to find online about UK regs, Q was only used for foreign visitors or tax free exports.
Can anyone explain further?

The Q registrations that I have seen have been in the configuration Qnnnaaa where n is a numeral and a an alphabetic character. I’ve never seen a plate of the form Qaannn and the UK vehicle check certainly doesn’t recognise QFJ237.

I don’t believe “Q” was used at all in the UK in the era of classic cars. However, if the plate registration is NOT starting actually with a “Q” but is say OFJ237 then that is logical and would indicate a UK vehicle first registered in the Oxford area of the UK.

My understanding is that in years gone by a “Q” might be mistaken for a “O” or even the number “0”, so it was not used on number plates in the UK until number recongition cameras could definately destingish better quality images - and now (as Peter has mentioned) the digit “Q” is only used in a specific configuration and allocated to vehicles who’s actual date of manufacture cannot be varified, when a car has been imported to the UK, or is a kit car or heavily modified vehicle.

Sounds like there is a mistake then on the part of the correspondent, what we in America call a bum steer.
Thanks for checking anyway.

Another theory. This Mark V has an RAC decal in the windshield, but is LHD with turn signals rather than trafficators. It is now in Calif. What about if the first owner was a foreign visitor such as an American serviceman stationed in England? Would they give him a Q reg?

I really don’t think any vehicle in the UK was ever issued with a Q plate of the form QFJ237. Perhaps that form of plate exists in some other country??

Ok as Sherlock Holmes would say, we’ll set aside that theory as it didn’t lead anywhere.

Just because I’ve never seen a Q plate like that it doesn’t mean it doesn’t exist. I just found this: 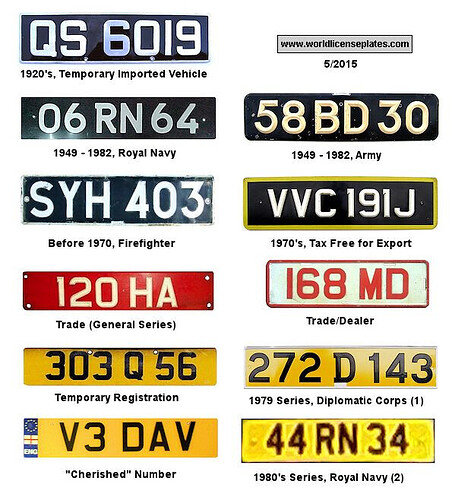 Without asking the obvious - do you have a photo of the actual Number (Registration/License) Plate ???
On what basis do you say its a UK Plate/Registration ???

A photo would quickly show if its British, British style as used by other Commonwealth countries, or indeed from some other country… OFJ237 format is not exclusively British…

No photo, only an old reference second hand from JDC.
As Peter says, it may not be UK, may be some other licensing authority.

Just I thought - I believe the RAC operated in Australia, so a badge on the car might not be exclusive to the UK. Also Australia used I think number plates similar to your search:

These are plates from Queensland vehicles.

Like the UK, Australia would normally have RHD cars, so slightly odd that the vehicle being traced you mention looks like LHD - unless it has been re imported from another country.

I suspect you’ve solved the mystery.

Just a bit of trivia re the Australian registration plates. In the post-war decades, the alphabet was ‘divided’ up and allocated to the states in groups. NSW had A to F (and I think F was reserved for heavies - Freight), Vic got G to L or M, Qld got down to Q or R, etc. The number of letters allocated was relative to the car population of each state. These eventually became all consumed by about the '80s and the whole alphabet was opened up to all. Registration plates were/are not perpetual and became void upon expiry of the registration, and if you moved to a different state. Long haul transports had a separate series that made them valid in any state upon renewal. Some readers might be able to add or correct my distant memory of this.

The market in early plates has gone bonkers and if you got a decent bundle of them a while ago, you could now have more than million $ worth and you don’t need any more space than your sock drawer. No garage, no workshop, and no maintenance needed. Advancing age investment problem solved.