I am still trying to resolve my hard start and no power problem. I replaced the water temp sensor, the fuel pressure regulator and the the fuel pump with no positive results. The fuel pressure at the rail on the old pump was 8-10 psi. Installed new pump today with no increase in performance. With the old pump the engine would rev up and run steady but would die when you try to idle. With engine running at 2000 rpm NO GAS WOULD COME OUT OF THE RETURN LINE. Whats up with that?
As always any thoughts someone could offer is greatly appreciated.

Blocked fuel filter perhaps? That fuel pressure is way too low which is probably why there is zero return to the tank.

Definitely way too low - I agree, possible blockage, most likely at filter as Robin said

I have1995 X305, which I believe has a similar fuel tank and piping to your car, and I had a fuel supply problem and it turned out to be a kinked supply hose from the tank. It looked like a previous owner had worked on the fuel tank and had tried to remove it from the car without disconnecting the fuel lines and in the process kinked the supply hose so badly that it was almost completely blocked.I replaced that hose and that fixed it.

Thanks Jeff, A new fuel pump was installed yesterday. I will question the mechanic about the rubber hoses he removed to get the tank out. This problem was not a gradual build up. The car ran fine the wthe time I owned then one day I stoped at the store, came out and tried to start
It with no luck. I am beginning to think electrical issue. Maybe ecm or relays, etc.

The fuel filter was replaced 6 month ago, but will do it again just to eliminate that. Thanks for your reply.

The rotor was the first thing it replacwd when this problemmm started. Thanks for your reply.

I should mention the mechanic said the the pump he removed looked brand new and so did the tank. No visible signs of contamination.

Gary, try swapping the fuel pump relay (found in the trunk, right side, near the taillight behind the trim panel) with the A/C clutch relay (in green base on firewall). Assuming your A/C clutch is working correctly. Sometimes relays can wear to the point they pass the required voltage but not the required amperage.

Thanks for your reply Mike. I was told by another source that the fuel pump rely was moved to the
right side of the firewall for a total of 7 relays at that location. I was told the pump relay was pluged into a yellow socket and to exchange it with the one next to it with a red socket. Doing this made no difference. The mechanic is doing more pressure tests to at every fitting from the pump to the return line at the fuel rail. The car starts but needs to be coaxed by light taps on the gas peddle to build up rpms. I feel like l’m milking a cow. But once it gets to 1000 rpm you can rev it to the red ilne with no problem in park or neutral. But when you drop it into gear it bogs down with no power and your back to playing with the gas peddle to make the car move. When it is running it runs smooth so it appears all cylinders are getting gas and spark. There is some kind of a regulator type device that is connected to the input end of the rail with pipe fittings and connecter to the hard fuel line from iatedthe pump by a built in rubber hose. My parts manual doesn’t even show this thing but it shows the threaded fitting on the rail it connects to.
I have scavaged every air and fuel delivery and return item from another 1964 xj6 within the
vin # range of my parts/service manual. I am armed to the teeth right now with replacement parts but I am hoping to get some expert input as to my next steps including dionostic tests. As always every and all suggestions are greatly appreciated.

I was told by another source that the fuel pump rely was moved to the
right side of the firewall for a total of 7 relays at that location. I was told the pump relay was pluged into a yellow socket and to exchange it with the one next to it with a red socket.

Unfortunately you were given bad information. The seventh relay that was moved to the firewall for our '94 models was the IGNITION ON relay, not the fuel pump relay (which is, as I previously stated, in the side of the trunk near the right tail light). Here’s the skinny on the firewall-mounted relays:

'93 / '94 cars with SIX relays on the firewall are served thus;-
Black base = EMS fuel injection main relay
Green base = A/C clutch relay
Yellow base = Oxygen Sensor Heater relay
Purple (Lilac?) base = Auto Transmission power relay
Blue base = Engine Breather Heater relay
Red base = Air Injection Pump relay
||
[If there is a SEVENTH relay it is the 'Ignition ‘ON’ relay in a white base]
||
Relays are p/n DAC7686 (lt blue non-sealed) → JLM21842 (black sealed)

Do you have Jaguar publication S-91, the AJ6 4.0L Engine Management System / OBDI Diagnostic Guide? Very helpful for confirming information and troubleshooting problems. BTW, what are the last 6 digits of your VIN?

Have you tried testing /driving with the airflow meter disconnected? (electrically)

That is the fuel line damper, there is another at the output end that is the Fuel pressure Regulator, might pay to have the mechanic check that that is still intact, the diaphragm can develop a pin hole that allows fuel to leak into the inlet manifold.

That is the fuel line damper, there is another at the output end that is the Fuel pressure Regulator, might pay to have the mechanic check that that is still intact, the diaphragm can develop a pin hole that allows fuel to leak into the inlet manifold.

Further to Robin’s suggestion, one can easily check for a ruptured diaphragm by pulling the vacuum line from the regulator to see if there is fuel present. 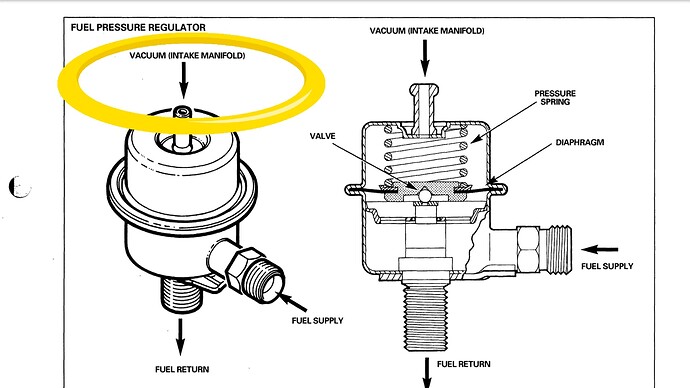 The fuel pressure regulator has been replaced with no improvement. The pulse dampener is no longer available neither is the intake air temp sensor at the throttle body.
The vacuum line was disconnected there was no fuel anywhere in the regulator. Cracked the connection of the regulator to the rail with engine running and no fuel leak!!! Can’t understand how the engine can run at 2000+ rpm in park with no fuel pressure at the regulator. Granted when you put it in drive the engine wants to die. Can’t do any more until monday.

Gary, you and/or your mechanic may find this fuel system flow diagram, found in the Jag publication S-91 I previously asked if you had (do you?), helpful: 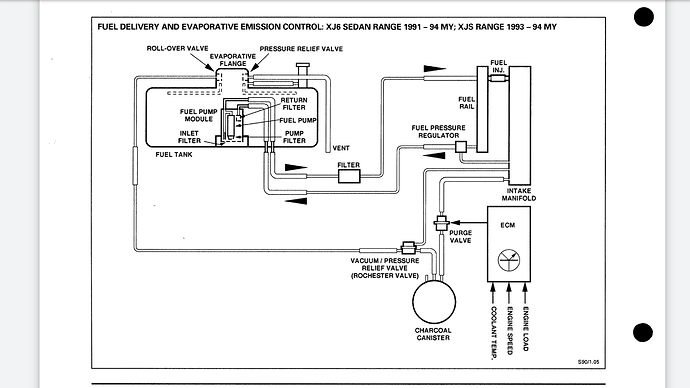 This thread from the archives contains some good fuel system issues information including a simple way to test the adequecy of the fuel flow (not pressure – flow):
[xj40] Fuel pump question - Do I need to replace it??

Thank you very much for sending that. No, I did not have that.
One of the first things my mechanic did was check the fpr for vacuum and/or presence of fuel. I do not remember what he said about vacuum but I know there was on fuel at the regulator, even with the engine running. Unplugging the connector from the maf made no difference. Replaceing coolant temp sensor made no differece except it started with a lot less attempts with the sensor disconnected than with it connected. Can’t understand why the engine will run but no fuel leaks from the fitting attaching the fpr to the rail when loosened. A new pump was installed fri. but the condition is unchanged. Mon. he wants to check the fuel lines from tank to rail and back for physical damage and check fuel pressure at each fitting.
About the fuel pump relay, it is not anywhere in the trunk. I removed all the trunk liners looking for it and the only relay was up near the radio antenna. I will let everyone know what monday reveals. Thanks to all for your help.