I was wanting to get an early start on reupholstering the 120 and I was wondering if anyone had ideas on the best way to go about it.

I want it to be as original as possible (Very early XK120). Would I be best off ordering a kit from a reputable company and pay a local upholsterer to install it, or does anyone know of an upholsterer in the Melbourne area who would be able to reupholster the car to original spec with their own materials.

As far as the kits go, does anyone have experience with the suppliers and could recommend their products?

I have a price for a complete kit, including seat foam, full leather door trim, two tone and shipping from the UK to Australia for 3,722 pounds from John Skinner.

I would also need to have the soft top redone (not in the above quote) but that is another story as the original glass window in the back is not there, and there should be a chrome trim at the front I think and that is not there. At the moment the trim is done in vinyl and looks like Fred Flintstone had a go at it. Seats are very old leather which were redone at some time in the past as they are not the original two tone biscuit and tan.

Obviously this would all be done after the respray. Anyone in Australia know the code for the Pastel Metallic Green or something very close. I know I am poking the hornets nest there but after all of the searching no-one seems to actually give the code. The original colour of the car was opalescent bronze but I don’t really like it and everyone is just going to call it brown (No it’s BRONZE).

Hi Matt, I know Grant White just finished an XK150 FHC… and I will be using him for my XK150, as I was happy with the interior he did for my MkV. Grant is in Heidelberg…

Mathew
some interesting questions there!
kit from a reputable company “more importantly an accurate kit”
best to give us a call on the terry 0407797003 in the west

Matthew
I did my 120 with a kit from John Skinner, it was a very good and complete kit, which I recommend.
Years ago I did my 140 with a kit from someone else, which was not as good as this one, I had to redo the door panels, underdash panels (these were not supplied), etc.
I can send you pictures of the “Skinner” 120 interior once done if you like.
The foam cushions, from any supplier, are always much too hard compared to the originals. In order to soften them, and have a lower sitting position, drill holes in the foam (bottom side) at regular (and quite close) intervals, using a hole saw. Drill approx 2/3 of the foam thickness (a bit more in the middle) and remove the foam bits. Very good result guaranteed.
Regards
Francis

Photos would be great. I would be interested to see how it turned out. I have concerns that a kit may not fit exactly every car as they are all a bit different.

francis makes a very valid point on the cushions because they are a solid block of foam/rubber yes they are to hard when trimmed just doing an XK140 at present and I am using a hole saw to put a block of 9 holes into the base.
But if you look at the original cushions they had these holes in the centre of the cushion as standard it allows the centre of the cushion to depress whilst still giving some support around the perimeter.

Check out BAS. They show in videos, for a selected Jaguar model, the great lengths they go to in order to produce a quality exacting product.
Impressed me enough to be having a semi finished kit purchased and is presently being fitted to my FHC.

We offer a wide range of high quality upholstery products for classic Jaguar cars. View some videos and photos of our work.

one thing I can say about interior kits…unlike holsters…where one has a box of em that have been tried, and always finding a new one, or gloves…same; …it is good to do the research you are doing, then buy the very best. You will live with the interior you install a long time and every time you look at it, you want to be happy,. Maybe…you want to have it exactly correct. Quite a few pics to look at too, on line in sales, and in Urs two books of original type, with two tone, etc.
Nick

BAS is quite impressive! Looking forward to pics of your FHC after the install. Thanks for the link. -Renee’

Thanks to everyone for all of these replies. I noticed that BAS didn’t have an opening in their carpet for the gearbox dip stick, and was there originally an opening for the high beam switch in the carpet.

I think I am going to have to get my carpet locally made as there is a couple of bumps in the gearbox tunnel to accommodate the overdrive fitted to my car. On that does anyone know if it is possible to remove the centrifugal switch and blank it off on the mark vii overdrive, or is it integral with the speedo cable drive? This has not been wired in and is not necessary. 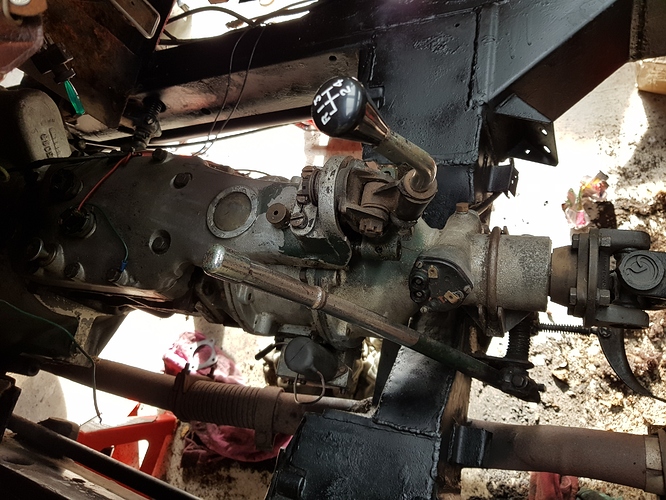 I installed a BAS interior in my XK120 DHC starting back in the late nineties through 2002 (it didn’t take that long I just couldn’t afford the outlay for the whole thing in one shot!). At the time BAS had a franchise operating out of Vancouver, B.C., I understand that they have since shifted south to California. I was pleased with the product but, as you noted, they did not provide a cutout for the gearbox dipstick. Also, on the driver’s side firewall carpeting there was no shallow cutout to accommodate the steering column and as I recall I had to deal with the dip switch fitment. Minor cavils for what was, and still is, a fine looking interior kit.

holes in base of cushions to reduce the hardness of the cushions supplied with trim kits.
Holes 2 inches in diameter and 1 3/4 inches deep still probably not enough but worried about the moulded foam which is not as durable as the old Dunlopillo breaking up. 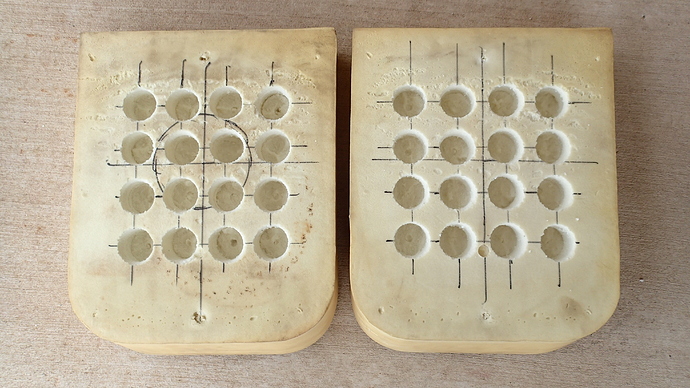 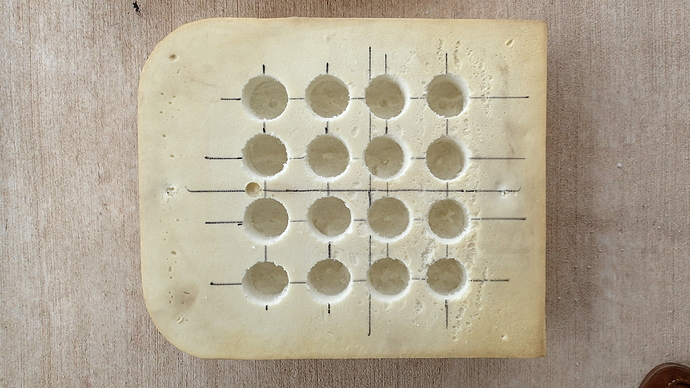 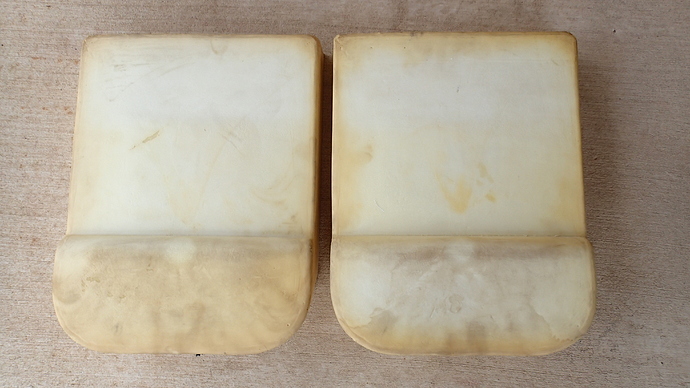 francis makes a very valid point on the cushions because they are a solid block of foam/rubber yes they are to hard when trimmed just doing an XK140 at present and I am using a hole saw to put a block of 9 holes into the base.
But if you look at the original cushions they had these holes in the centre of the cushion as standard it allows the centre of the cushion to depress whilst still giving some support around the perimeter.

Any seat cushion replacement will always remain an attempt to come as close as possible to the original. But we all know that it is impossible to match the design freedom of a foamed cushion (that the guys from Dunlopillo had) where air pockets of any shape can be positioned where required. See example below of my XK 140 FHC. I guesss your attempt will come very close, Terry. 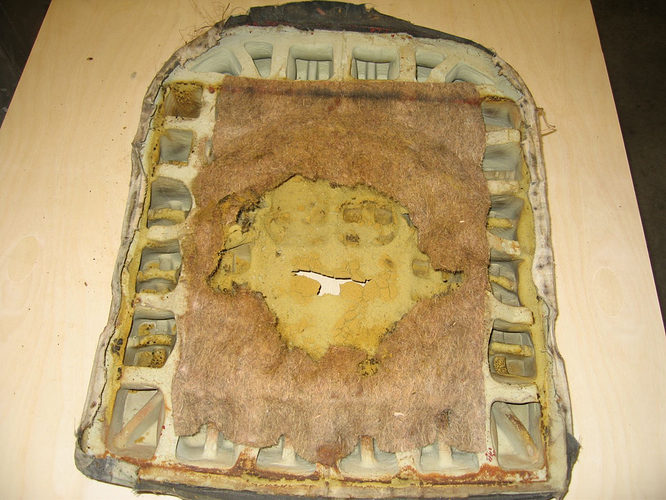 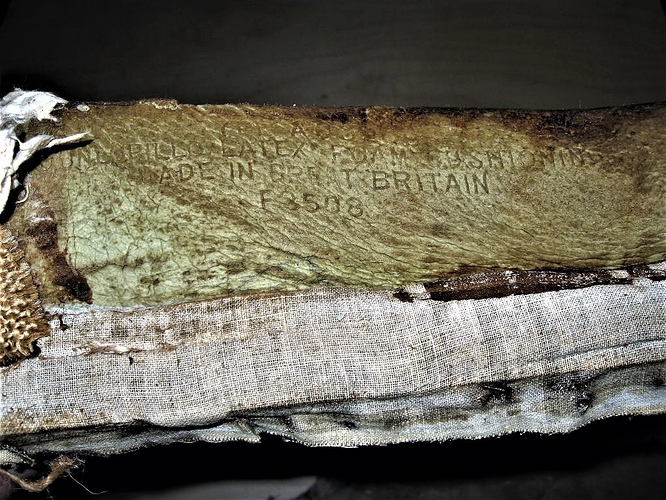 My 120 FHC Interior nearing completion. Just waiting on steering column shroud and clips to fit on gear lever / handbrake gaiters.
The end is in sight. 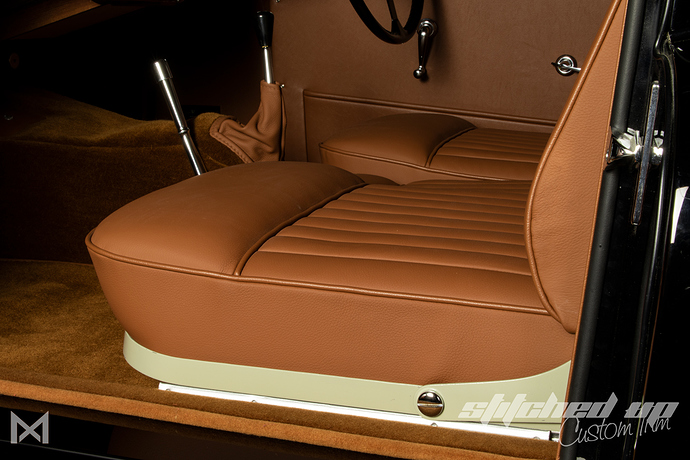 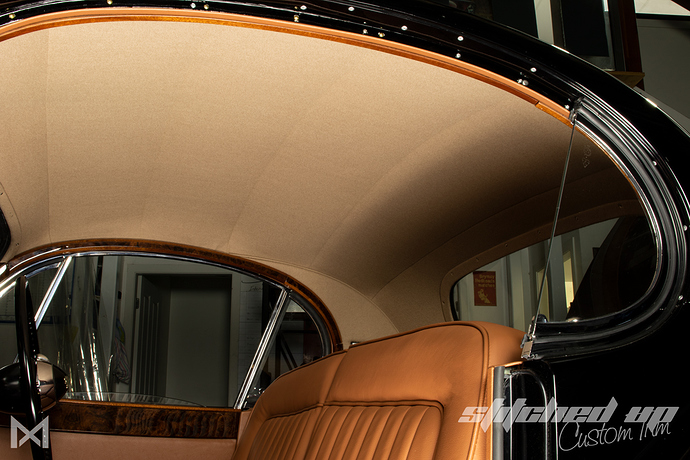 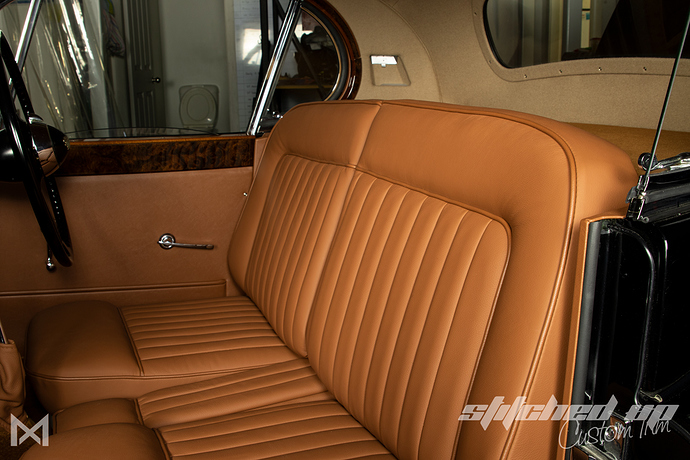 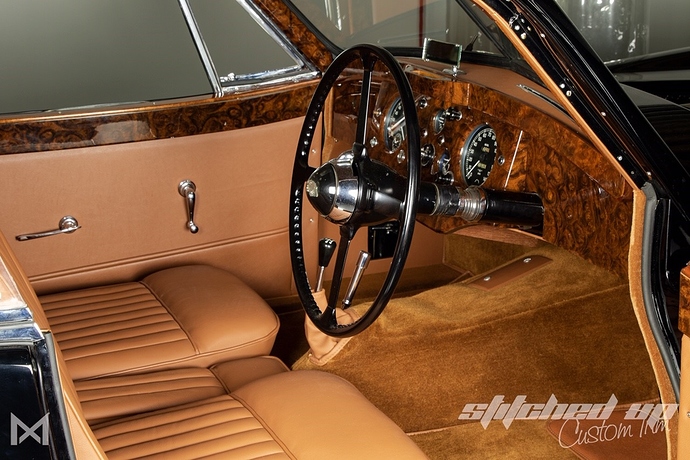 That looks stunning. With the trim and everything else installed as standard I find mine very difficult to fit in the drivers side. Seats are too hard. Haven’t yet summoned the courage to make any mods

looks great, I think you will find the front edge of centre arm rest needs to be at same height as front of seats not dropped down so far.
going to be a complete “B-----d” to put shroud on steering column now - horn manette and wiring out, steering wheel off etc.
Leather seat piping?

Hi Terry.
I think the steering wheel is probably just mocked up till the shroud arrives.
Yes need to sort the centre arm rest.
Cheers

Actually when I look at some other cars interiors they have the same sloping centre arm rest?
Is there something I’m missing?? 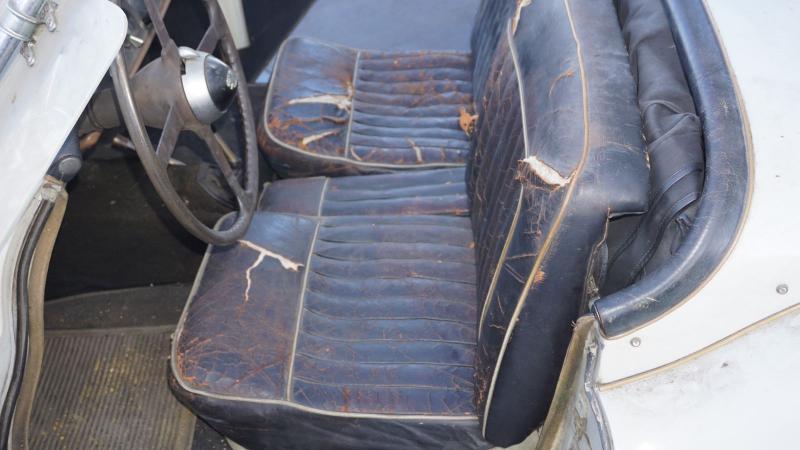 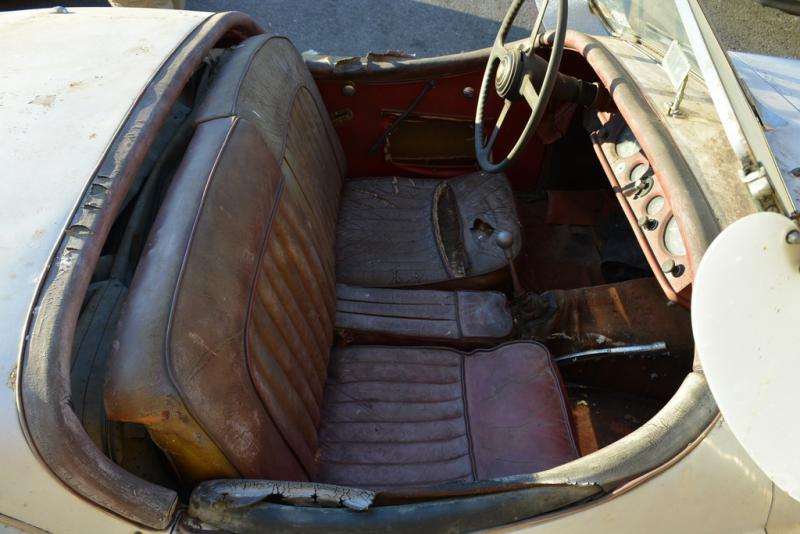 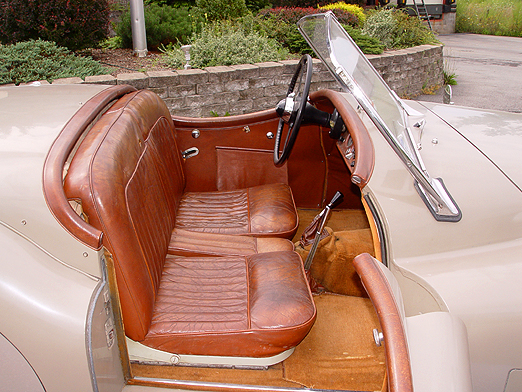 likewise i (the trimmer) forgot the steering column shroud. however my template came from a Pret coffee cup! 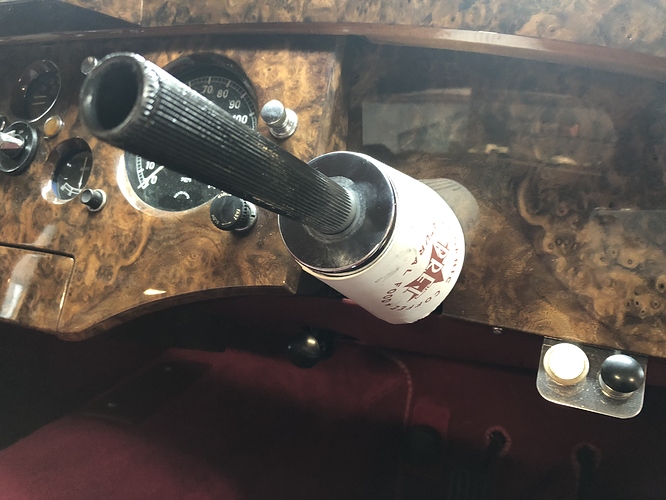 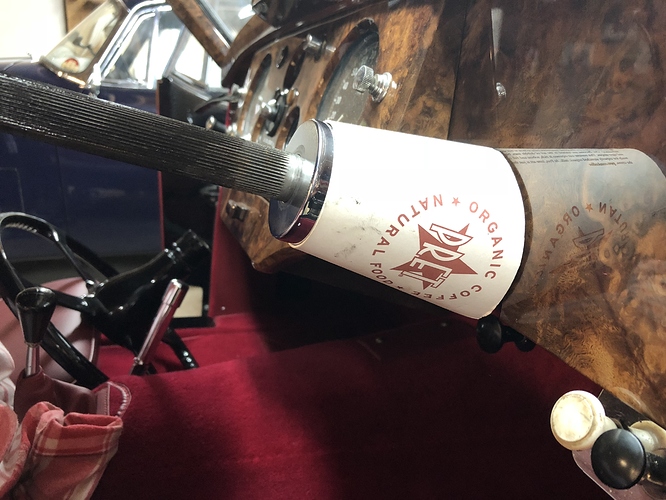 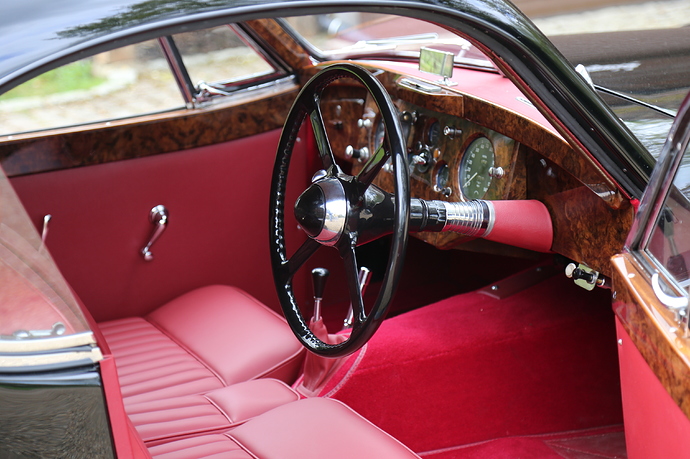