Matthew,
don’t forget that the very early 120 OTS had a differently-shaped panel at the front of the seat cushion, with a fillet of leather each side. This would probably need to be custom made, as I don’t think any trim kit suppliers provide seat covers like this. Yes, I know the black carpet is wrong, but it will be put right eventually. So is the mirror. 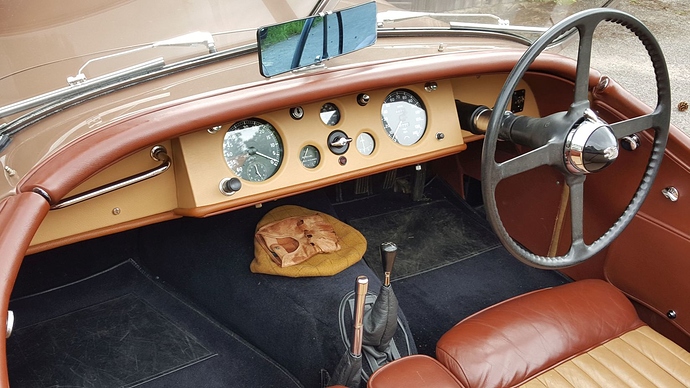 I think most of the tail cones do not have a hole for the centrifugal switch. you can probably switch the whole aluminum casting but it would be a bit of work.

Hello Phil.
When you did you centre armrest did you replace or reuse the panel that was then re-upholstered? I’m interested to know why on some cars it seems to sit level and others it appears to slope down.
Anyone judged these cars before and have any thoughts regarding this?
Anyone with an original upholstered car or photos that would comment?
Regards, Graham

my original looked like this. I gave it to the trimmer but I believe he remade it. 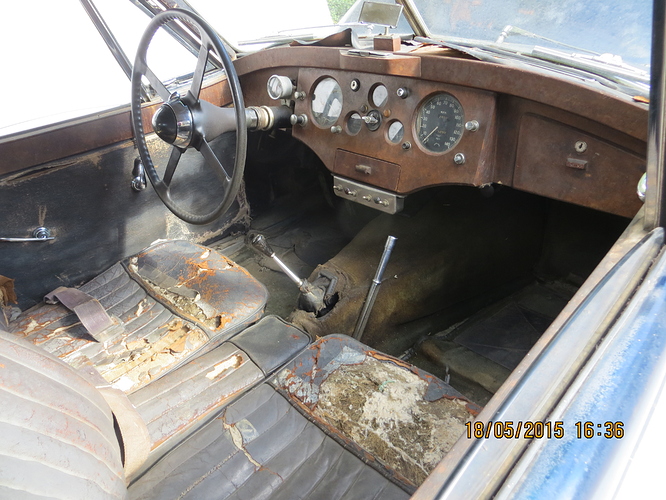 Wow. What a transformation. Nice.

The car was 100% complete which is why i bought it. I agonised over changing from the original spec (solid wheels and colour and drum brakes at the front). In hindsight…

After more than 25 years of insisting that I wouldn’t do it because it wasn’t built that way, I have now decided that I will convert my140 to wires and am starting to order the parts. Several people have advised me not to go this route and to keep it original but I think the car looks so much more appealing on wires. I have discovered that this is not an inexpensive conversion. Four hubs, drums and spinners plus five fully stainless wheels and Pirelli Cints = north of GBP4,000.
I salve my conscience by retaining the steel wheels and spats with the car so that the next custodian can easily convert it back if they want to.

OK. Based on what I’m seeing ,in photos of cars with original trim, it can be argued that the centre arm rest does indeed slope down, at least on some cars anyway, making mine look just about right.
Verdict is mine will remain as is until I learn otherwise.
Cheers.

Graham,
Can I suggest its best to reference not just original cars, but those with reasonably sound claim to being extremely low mileage/unused cars.
See attached photo of seats in recently ‘revealed’ 4500 mile from new June 1950 XK120 that although clearly somewhat ‘enhanced’ in certain detail, and carefully ‘detailed’ all over, does indeed look to have its original untouched seats - if indeed unfortunately those with the short lived, bolstered cushion at the front edge of the seat-cushion…………. 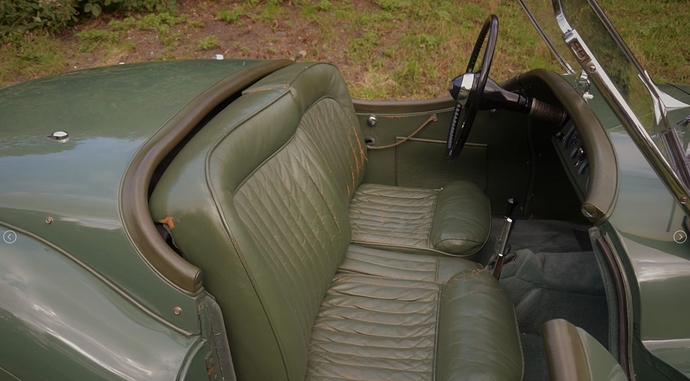 Note carefully, the alignment of the piping.
I will let you make your own judgement.

Hi Roger.
I really don’t know if that supports my centre armrest or not?
This original unrestored interior in 671975 seems to. 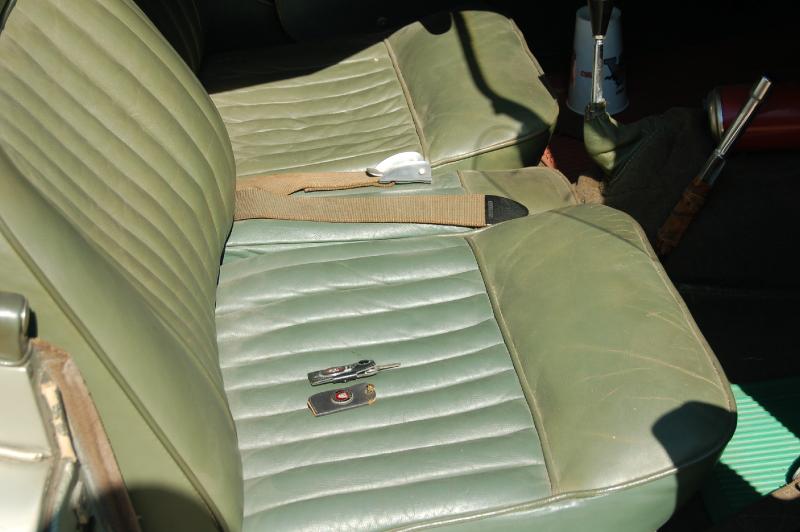 that should read 671957. Brain’s still scrambled from air travel.

Don’t know re 671975 - don’t know this car.
But your photo of seats makes me wonder, with distinctly different colour green, for RHS cushion-pleated area AND the pleated part of the centre console, relative to the LHS seat, squabs and RHS cushion front, suggesting major repairs/leather replacements. Maybe its the light, as that can affect images of colour, but there are clear demarcations and inconsistencies that suggest not a light issue.

Roger… where is this car… ?

More photos of 671957 are on xkdata showing varying amounts of color fading on the seats, cockpit trim and doors after 15,000 miles and decades of storage.
http://www.xkdata.com/cars/detail/?car=671957
Its probably still making its way around the auction circuit looking for a buyer with deep pockets.

OK. So let’s compare it to the low milage 50 OTS with the bolstered front seat cushions. Not a good car to compare with as obviously a different seat design but on close up inspection of the piping, firstly running along the drivers side seat, the centre arm rest starts higher at the rear and drops, in comparison, along it’s length. It is really only at the bolstered area, where the drivers seat piping drops down and around the bolstered area does it again line up. If this piping remained straight my estimate would be the centre arm rest has dropped from a position higher at the rear to approx 1 1/2"at the front.
The passenger seat gives a better indication of this as the arm rest piping is clearly seen higher at the rear but by a quarter way along has disappeared from view.
I am inspecting my car in the next fortnight and am hoping the original arm rest is still there for comparison. If the original does in fact slope, as I’m expecting it does, that’s how it’s replacement will remain.
Regards, Graham.

But Graham - what you suggest is best I think - see what your original was like - it was a very good/original car before you started its full restoration, so totally relevant reference.

There is nothing to say that there were not subtle evolution over the 1949-54 period, or whether its an OTS versus FHC thing, indeed major changes did happen to the seats themselves.
I tend to think the 4500 mile June 1950 LHD OTS has some sloping forward, so not flat, but not as much slope as the 14900 mile March 1952 LHD OTS, and indeed whose to know for sure whether same as a June 1954 RHD FHC or not. Also the position of the sliding seat can impact on what is seen.

What’s to be established is if any change in slope was a deliberate development, or simply a matter of variable production/quality control

Francis:
Very elegant way of softening and lowering the seat cushions.
I opened the rear edge of the leather and just tore out between golf and tennis ball sized bits until I was pleased. Only went about half way in, to keep the shape and thigh support.
But next time, I will do as you suggest.

When looking at the very smart ”cigar” interior, the position of the steering wheel reminded me of how far out it is. Even when pushed forward, it sticks out a long way. Can the column be shortened?
But then the very large wheel will interfere with my long legs, as the pedals are too close to the seat, even at its most rearward position…
I ended up using a smaller Moto-Lita wheel in my 120 FHC.

Graham,
Can I suggest its best to reference not just original cars, but those with reasonably sound claim to being extremely low mileage/unused cars.
See attached photo of seats in recently ‘revealed’ 4500 mile from new June 1950 XK120 that although clearly somewhat ‘enhanced’ in certain detail, and carefully ‘detailed’ all over, does indeed look to have its original untouched seats - if indeed unfortunately those with the short lived, bolstered cushion at the front edge of the seat-cushion…………. 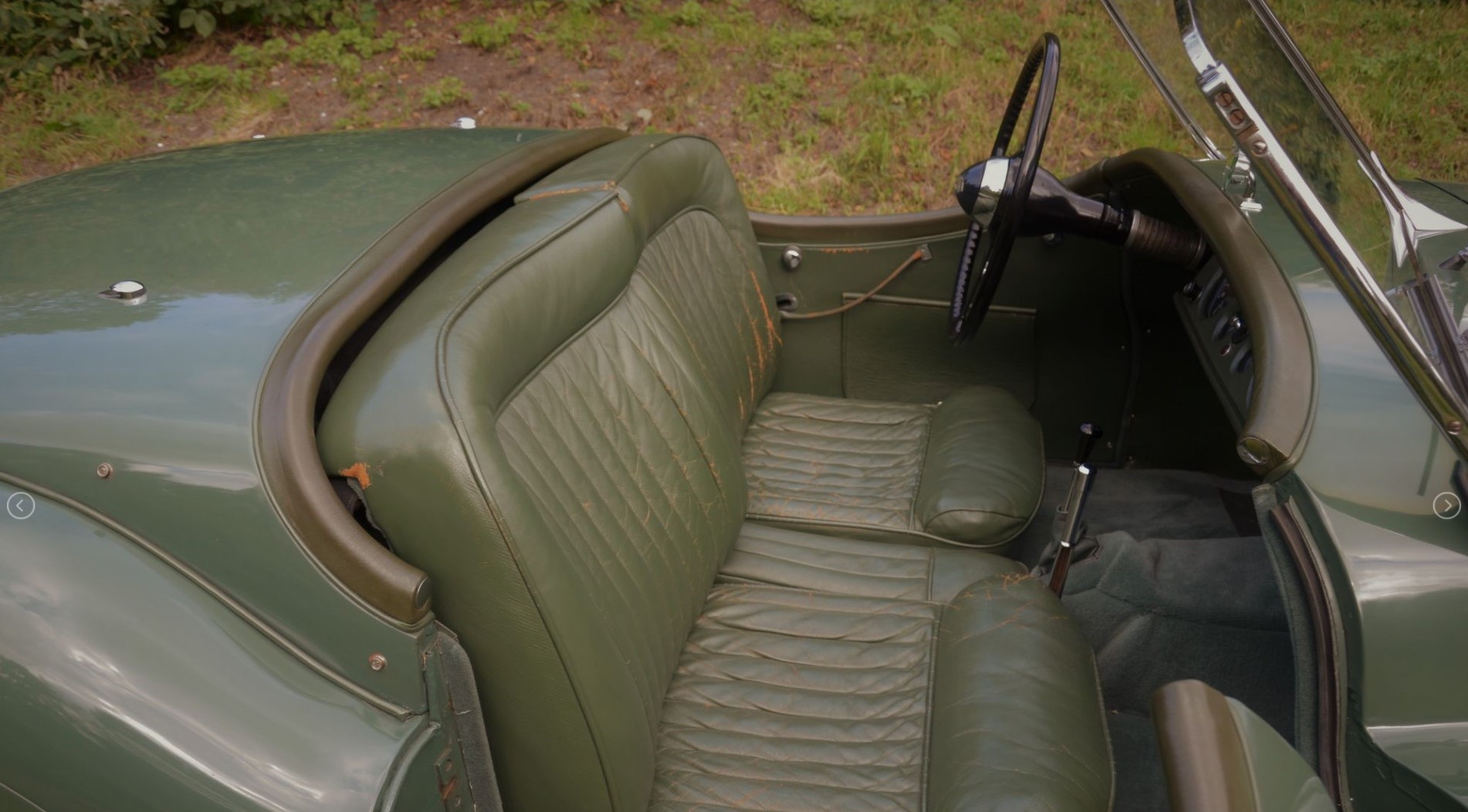 Note carefully, the alignment of the piping.
I will let you make your own judgement.

I’m rather pleased that my Dec 1950 car has retained the bolstered front to the seat cushions with the extra fillet let into the sides. Just a quirky feature from that particular period of production!

I’m rather pleased that my Dec 1950 car has retained the bolstered front to the seat cushions with the extra fillet let into the sides.

Sorry Chris, poor choice of words.
I meant ‘unfortunate’ in the context of the subject at hand, regarding alignment of the centre-cushion not so apparent with the cushion-bolster. Wasn’t meant to be a comment on seat comfort, and I agree probably improves things over a flat cushion.

Misunderstood you Roger! Actually, the bolster-type possibly does look slightly less “neat” than the normal shape of cushion, but I quite look the “lived in” look… BTW, did you get my dashboard pics, and are they what you were looking for?