I’ve modified this thread to discuss my experience in modifying the exhaust on my US Spec 4.0L '93 XJS convertible – it’s the inline 6 cylinder motor.

I first asked about the pipe sizes after the first cat, and the input size to the rear factory mufflers, which both ended up being 2".

At a local muffler shop, I replaced the mid-pipe with a cherry-bomb style pipe, and the next two devices also with cherry-bomb like devices. They were installed the “quiet” way, such that the spiral-patterned louvered perforations would grab and disrupt the air flow.

I don’t like it, so I’m planning to make more changes.

The first setup I tried was to remove whatever those two devices are after the cats, and replace them with straight pipes. I didn’t like that at all. It was way too loud, and also had a drone. In fact, the car made a racket even when just slowly starting out from a stop-light. Not fun.

I will update this thread as I make progress on trying to get a improved exhaust with a sporty but not obnoxious sound.

OK. For anyone curious, I measured, and it appears to be 2".

I’m wondering how a set of turbo mufflers would sound. I could see glass packs being obnoxious

Agreed. I’m trying to work through that issue right now.

I’ve replaced one of the glass-packs with a large stainless steel resonator near the end of the factory center pipe. I’m planning to add two single chamber mufflers after the Y pipe (one on each side), and keep the two large rear factory resonators that connect to the exhaust tips.

Right now I have the center resonator in, and I have glass packs where I’m planning to put the two mufflers. It has a nice, sports-car sound without being loud or over-bearing, and I can notice a seat-of-the-pants pickup in acceleration with the large, straight through resonator in the middle, vs a more restrictive louvered glass pack that I had previously installed at that location.

I’ll update and post pics when I have the work done. I’m using off-brand stainless steel parts from Amazon for relatively modest prices, and I think that I’ll be pleased with the end result, which I expect to be a healthy growl, but not overbearing and with zero droning. (at least, that’s what I hope for!)

Here are some photos to liven up the thread.

This is the center resonator that I put in. It’s bigger than it looks. It’s an oval that is about 9" wide and about 4" tall. With it installed, it lowers my ground clearance a little, but I’m very happy with the performance of this part. It’s straight-through with perforations in the pipe, so it flows nicely, but also helps tame the noise shrew! 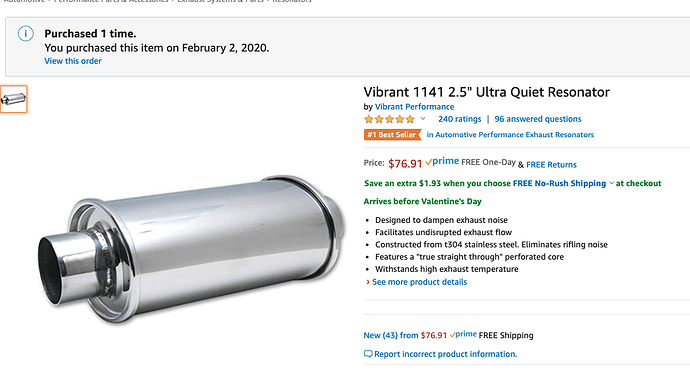 Next, here are the single-chambered mufflers that I’m planning to use. Either the centered ones, or the ones with the off-set output, depending on which will fit best. These mufflers aren’t straight-through perforated pipes. Instead, they are a single chamber with two barrier-like pieces of metal welded in them so that the exhaust will have to flow around the barriers. They will replace the two louvered glass-packs that I have in now which I suspect interfere with the exhaust pattern, making them more restrictive than I’d like.
More over, with the big resonator at the end of the center pipe, that should get rid of drone, and take off the rough edges on the exhaust tone without restricting flow. Also, if I’m lucky, they may provide a “scavenging effect” at certain RPMs, which would mean that in that RPM range, the negative pulses created by the resonator could actually help increase exhaust flow out of the engine.

Following this resonator and the factory Y pipe, I plan to install two single-chambered mufflers – one per side. These are off-brand stainless steel mufflers that have minimal restriction, but also would tend to be rather loud. I’d expect that they should be somewhat similar to the flowmaster series 10 mufflers, which are LOUD. Following the mufflers, I am keeping the two large factory resonators at the rear of the car that connect to the exhaust tips.

I’m thinking that with the large resonator, followed by true-mufflers and then the factory resonators, that I should have a high-flow system that makes a nice growl without any droning and without being obnoxiously loud. I guess we’ll see! 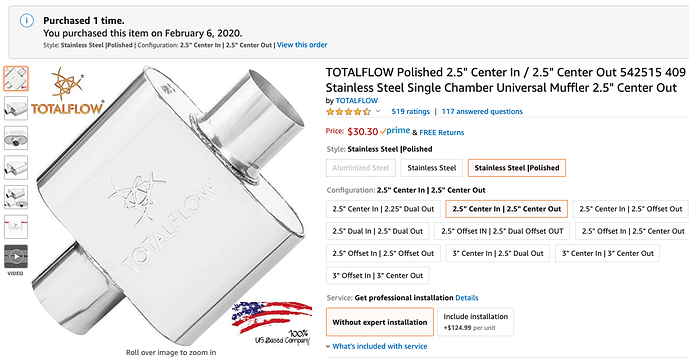 If I can’t fit two of those (either style) due to space constraints, then instead of the factory “Y” pipe, I’ll use just one of these:

But I’d prefer to have two mufflers, one for each pipe, because I believe they will be less restrictive and provide more noise suppression than a single muffler with one input and two outputs.

Feel free to comment if you have any thoughts. I’m planning to have the two glass packs replaced with two mufflers later this week. More to come… -Phil

Exhaust mods are done. I used the offset versions of the mufflers.

I really like it. The exhaust has a very deep tone, but it’s not loud and there is no drone.
When you floor it, it livens up some, but is not super loud.

Here are some photos of the work.

This is the inside of the glass packs that I removed. You can see how they have a spiral pattern meant to swirl and interfere with the exhaust. 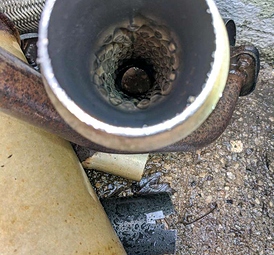 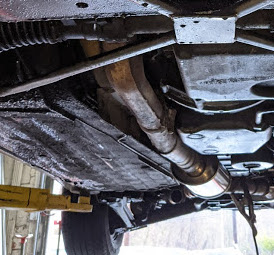 Factory front cats 2-into-1 pipe with large resonator added near the rear. 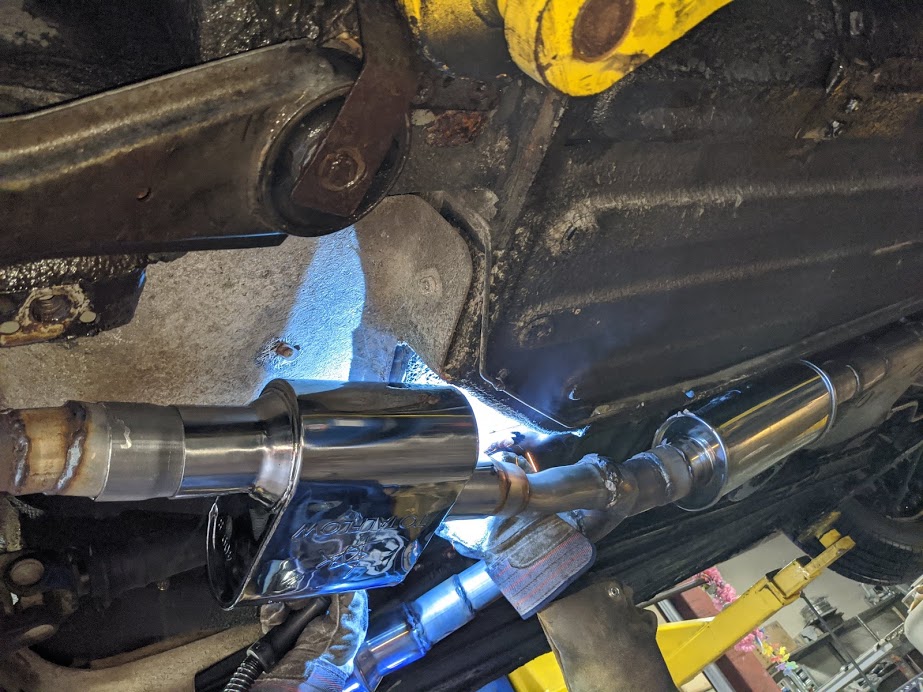 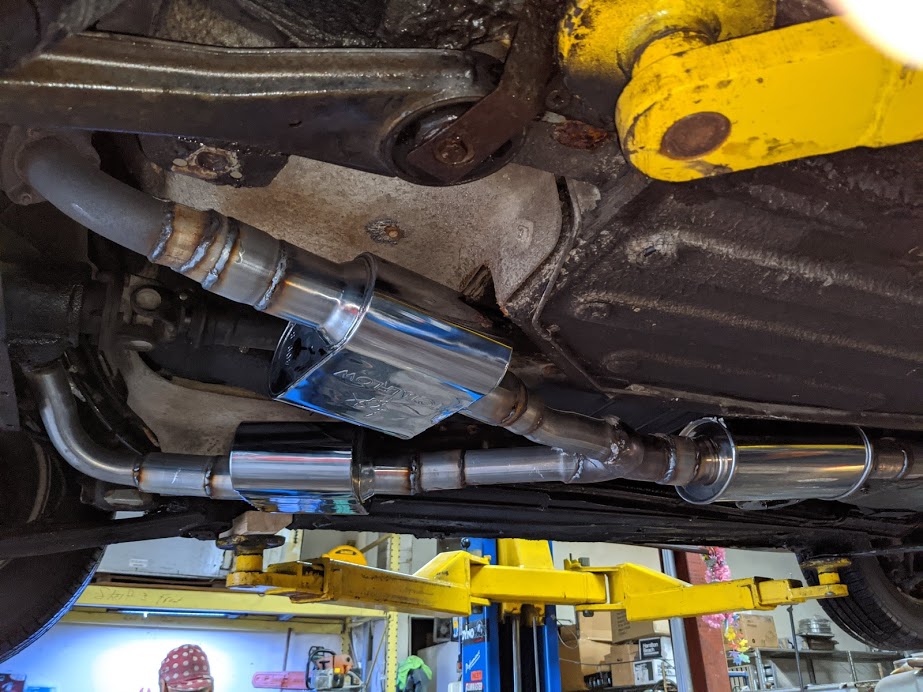 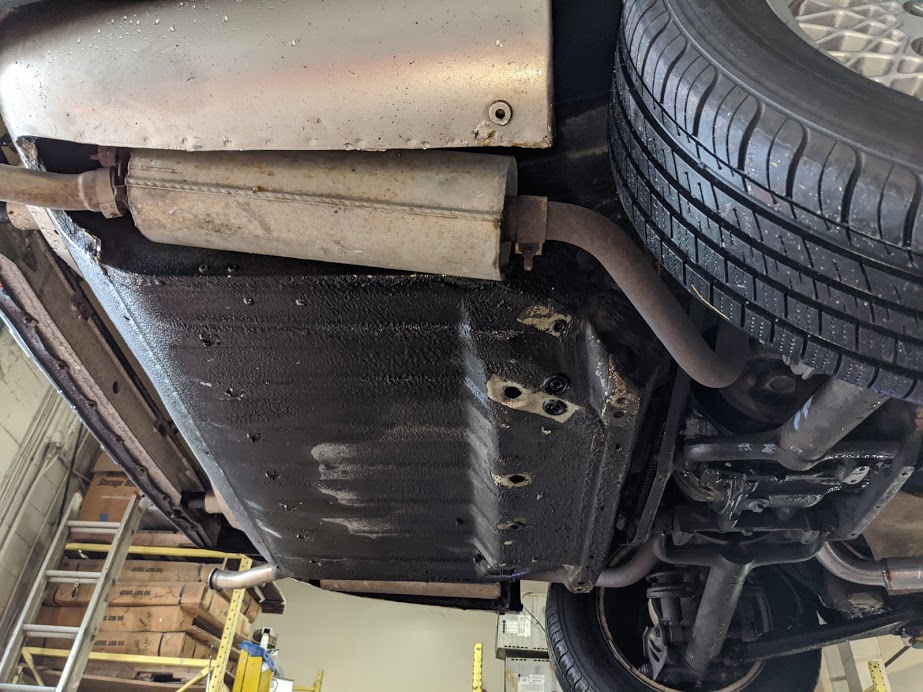 exhaust_factory_resonator923×692 173 KB
Which lead to the factory rear resonators and factory exhaust tips.

It’s noticeably more powerful. I punched it on a circular highway entrance ramp, and the rear broke loose and spun out. Fortunately, I didn’t crash and no-one was hurt, but I’m not used to this level of torque from my xjs.

Lesson learned. Show it some respect!

(uploaded photos to this thread)

Update: I like the sound. It’s pretty mellow. I love the power… but, the resonator I added hangs down too low, so it scrapes for example when I pull into parking lots that have inclined entrance at the skirt.
(see photo). 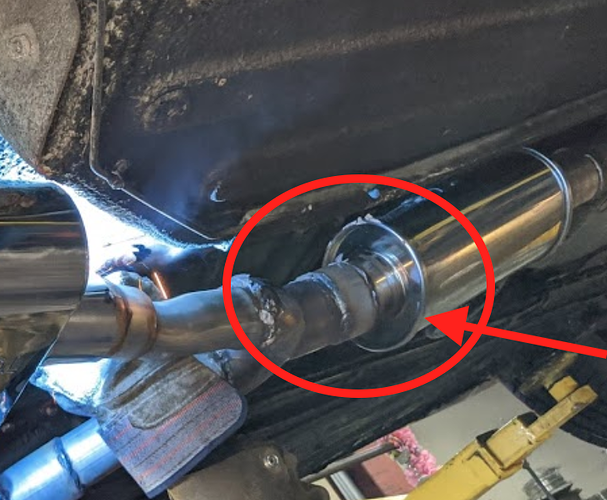 So the resonator will come out and be replaced by a small, straight-through stainless steel resonator, or if there isn’t room for it there, then I’ll see if the exhaust shop can fit one resonator on each side after the y-pipe spits and before the two mufflers. As a last option, I could try a straight pipe, but I like the idea of the resonator, and from what I’ve read it seems like a resonator in this general area may even improve flow by creating a scavenging effect at certain RPMs. Of course, you’d need to actually measure it, and if you cared tune and engineer it, but I’m not gonna go that far.

On a different note, I was told that my bracket to advance the timing by repositioning the crank position sensor has been shipped from the UK, and should arrive in the US within a couple of weeks, so, more fun is to come!

I’ll update with photos after I change the exhaust again.