So I installed the fog lights in my 85 and connected to the red/yellow wire as required. All is well and they work but I have a question about my UK sourced switch - you may recall from my other post that I replaced the standard US style switch with one from the UK because it doesn’t need to be modified to use the headlamps and fogs together. Someone from the other forum mentioned that it’s a plug and play install and it is, I’m just wondering if it’s working correctly. Below are images of both for reference: 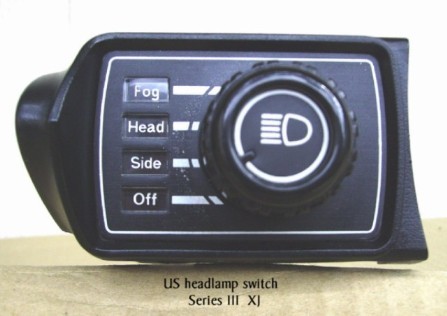 Okay so with my new UK switch, clockwise from ‘off’ at the bottom I have:

…but there is a push-pull component to the switch as well which controls the foglights in apparently non-foglight position.
In position 2 it’s side lights only but if I push it in the fogs come on (and off is locked out). Same with position 3 - I get headlights and if it’s pushed in fog lights as well. Position 4 is the same except I get the yellow foglight indicator on the dash as well. Position 5 is another lockout and if I recall correctly I have to pull out the switch to get to it and it’s foglights only with yellow dash indicator.

Question is, is this correct?

Looking through the wiring diagram and looking carefully at the switch I think I answered my own question. The little foglight icons at position 4 and 5 face the opposite way than the headlamp icon and from the wiring diagram the foglight dash indicator is for the Fog Guard lights only…

So It seems that position 4 and 5 are actually for the rear Fog Guard red lamps that are not present on US models… and that the push-pull action of the switch is the the front foglight control.

Correct? I know these seem like silly questions but the US switch is completely different

Correct? I know these seem like silly questions but the US switch is completely different

Sounds right, Mike. I was going to suggest the rear fogs because a similar switch on our Audi does that. BTW, I get very frustrated with the “European” symbols, which I can never decipher. Our Audi recently presented a scary looking symbol of a spouting liquid, just what you would expect from coolant overheating. I thought I’d seen it before, and based on that intuition fixed it by adding washer fluid. This symbol is really misleading, as it spouts from a single source, not two like the windshield washers. I don’t do any better with the other symbols…at my age it’s hard to learn a new language, sign or otherwise. But of course the US is joining the ROW–use of English alone is far too restrictive.

…but the ‘push/pull’ function is not like my ‘European’ light switch - which has four positions like the US version shown in the picture. But while the symbols differ (mine differ from both), the wire connections are likely identical on all versions - the connection to the various lamps are done by variations in the switches’ internals…

As Paul remarks, the US ‘3-position’ switch can be modified by removing a blocking circlip inside the switch - giving the 'European ‘4-position’…

Referring to your update; on the ‘European 4-position’ switch ‘4’ turns 'on both the ‘low’ beam and the fog lights - and also the rear fog lights, standard fitting in Europe. Driving on fogs only was illegal at the time - as was using fogs in clear conditions, in general still in most European road codes. And as using ‘high’ beams in condition requiring fog lamps is simply silly - positively preventing their use in ‘fog’ position is practical…

The ‘5-position’ seems to give you more options, and you may consult the local road code to see what is actually legal to use.

Apart from all that; yoyr switching of switches seems completely successful…

Not driven a twin-wiper E-type then, by the sound of it?

[squote=“Robert_Wilkinson, post:3, topic:349737”]
This symbol is really misleading, as it spouts from a single source, not two like the windshield washers.
[/quote]

So, typically, we find setups permitting front and rear fog lights to be switched independently and permitting use of front fog lights only as an alternative to high beams.

Jaguar probably thought that the use of front fog light is evident for the driver and omitted any control light, while the rear fog light was granted a control light.

Just out of curiosity: I like second-guessing, but isn’t anyone around with an original SIII UK OM? BTW, Bob, though I understand your concerns about misleading pictograms (until today the brake warning light typically is a stylized drum brake though no young driver will ever have seen such a thing in real life), I very fondly remember the time when we received a primer to French, Italian or even Swedish by the different instrument and switch denominations which nobody cared to adapt to the place of actual sales in the 1960s and 70s …

Happy holidays to everyone, celebrating or not

**
I have an original Series III xj6, UK specs, Jochen…

There is no separate control of the rear fogs - front and rear fogs come on, with ‘low’ beams, whenever ‘fog’ is selected. That Jaguar made other combinations available for different markets makes sort of sense - given the variations of local rules. And also, with separate control of rear fogs, a warning lamp for this makes sense - anyone driving behind a driver with rear fogs ‘on’ in clear weather will readily understand…

The rear fogs are so glary that it will drive you to desperation, and I wonder if rear fogs were not fitted in US for this reason. Road rage has ensued from far lesser causes - but Europeans don’t carry guns…

**
I sure ave to eat humble pie, Jochen…

I do indeed have the 5-position UK switch - but having had the car for only 20 years did not realize until you prodded my curiosity. The ‘5’ position is blocked, giving only 4 positions - there is no ‘push/pull’ function, and in ‘fog’, position 4, front and rear fogs are ‘on’ as is the ‘fog’ position warning lamp. However the latter seems rather to warn that the ‘high’ beam is disabled. Which in itself is a secondary warning that the ‘fogs’ are on. Obviously, in clear weather you would like high beams, and the lack thereof tells you to turn off the fogs…

The plot thickens - I wonder how many permutations there actually are…

The rear fogs are so glary that it will drive you to desperation, and I wonder if rear fogs were not fitted in US for this reason. Road rage has ensued from far lesser causes - but Europeans don’t carry guns…

In that era rear fogs were unheard of in the USA. There might’ve been regulations against it…I’m not sure. But, also, the configuration of the USA-type bumpers might’ve made the installation too complicated.

I’ll add that the USA Series III cars lacked front fog lamps as well, although Jaguar offered an accessory kit for those who couldn’t live without them.

Nowadays rear fog lamps are common in the 'States and, yes, can be obnoxious when used incorrectly. Needless use of fog/driving lamps…front or rear… is ubiquitous over here and one of my pet peeves

when turning on fog lights we’re involved in the setup of the switch to a very limited extent only, much unlike when disassembling a carburetter …

Have a great New Year’s Eve Party tomorrow and a very happy new year following! May the oil pressure be with you

**
Like blood pressure; I’m happy if it is present, Jochen - and a happy year to you and everybody…

Fogs give forward visibility under the fog, for curb-crawling - low beam makes you visible to others. If high beams give to visibility to drive; you do not need fogs…

I recently picked up my 6th Jag, an XJS from Canada and its an '89 XJS convertible. My point is it also has the 5 position headlight switch, and the extra position is for “City lights” I wish my S-II and S-III 's had the 5 position switch so I could run city lights during the day, I think they give the car an almost sinister look. But then I’d have to find the 7" headlamp with the hole for City light 45w bulb. I’d even settle for the 5.25" with a City light (like what’s on my XJR-100).

Hi Frank It’s good to read your posts, and you’ve been very helpful.

**
Isn’t the simplest solution to run on ‘dip’, Mark - apart from the sinister look…

Whew, a set would’ve been useful around here., yesterday morning. The famous SF ocean fog came in deeply inland It met the equally famous Central Valley fog. It wasn’t til early afternoon that it burned off and the sun was visible.

A few decades ago, I went into the Central valley one morning to a loss inspection of a large utility. My 88 Tbird was my steed. One small two lane artery was so dense, that I steered by the white
“fog line”, along what might or might not be a shoulder!!! Keep going or risk getting smashed from behind. All the time hoping I might see tail lamps of vehicles ahead. Rear fogs would have been most welcome. I mad it intact !!! Joining my smarter colleagues at breakfast. They came the day before!!!

City lights would be illegal in CA. The vehicle code is quite precise as to permitted lighting. Doug’s comment as to rear fogs surprises me.

I used to delight in adding “fog lights” to my cars & trucks. That phase has passed. I do have a pair of period correct Hella fogs, new and still in the cartons. Although intended for the Jaguar, my Jeep could use them more. It’s plastic lenses, in spite of polishing vigorously are dismal.

The '89 XJS convertible I picked up (as a non-runner) in Canada last August has the Euro (big single) head lamp; and the small bulb for the City-Lights as well as the complicated light switch - so many settings to choose from

Anyway; My XJR-100 has the Citi lights on the high beam (center lights) and I like the way it looks; I was also watching Top Gear (a really old episode) and they had one of the last '92 XJ12’s on the show and it had the City lights on all 4 headlamps. That was a bit much - but I liked the way it looked. Another silly mod; I figured I’d add the city light to the parking lamp circuit - if I ever get around to it. Currently; I’m in broken kitty hell right now. The XJR is the only one currently running and I prefer driving the older Jags, so the headlamp mod isn’t even on the radar.

I’ll review this thread when the time comes - when I’m board.

A minor inclusion to discussion of Fog light switches on the series 3. The “blocking circlip” that prevents actuation of the fog lights on North American cars is not actually “in” the switch but rather on the control stem outside the switch. removing the plastic bezel and the knob gives access and the circlip can be removed easily. Just in case anyone wants to have operative fog lights while waiting for their European switch to arrive.

Now I’ve got the switch - but I still need (another) one. the hunt continues.

I think I have a European lights switch Mark.
PM if you are interested.