In reading the operating handbook for my V12 I came across the attached with respect to replacing the coolant. “…it will be necessary to add the contents of two sachets of “bars leaks” to coolant when refilling” what is bars leaks? And what is a sachet? 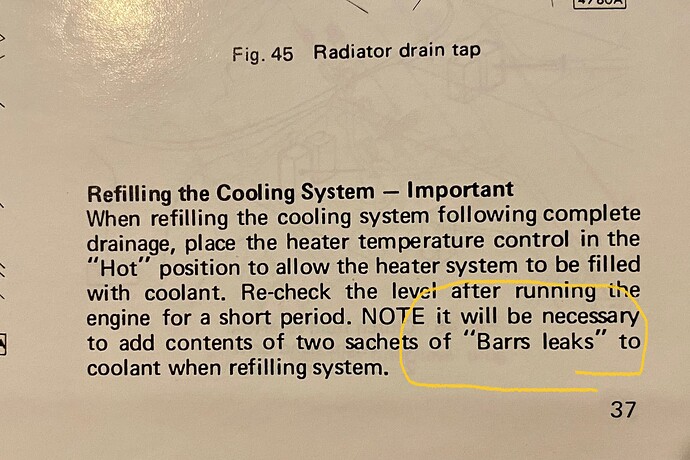 And what is a sachet?

/sæʃˈeɪ/ uk. /ˈsæʃ.eɪ/ a small closed container made of paper or plastic, containing a small amount of something, usually enough for only one occasion: a sachet of sugar.

Bar’s Leaks is a leak stopper. A sachet is a small packet. This form of bars leak is NLA. Routine use of Bars Leaks was a stupid idea from day one, and that’s not too strong a word. Ask here how many have found thick deposits of the stuff at the bottom of their radiators.

The VERY last stopleak I’d ever use in a car.

what is bars leaks?

Bars Leaks used to come in a plastic tube container with a cap on one end, it was about as big as a roll of U. S. nickels. Inside were loose granules you poured into the radiator. Looking at the manufacturer’s site I don’t see that particular product any more. I’ve got one container of it sitting on a shelf in the garage. I bought it about 10 years ago and never used it. Maybe they have been replaced with this stuff:

Do not use it !!! will clog the whole cooling system.

Thangs guys. I always thought this stuff was used to disguise cooling system leaks and not recommended. That’s why I was surprised to see it in the owner handbook. I’m going to flush and replace the coolant and see how we go with respect to leaks

If you can, and I know it’s difficult on a V12, it’s best to back power flush it with a power flush gun.

Note that the cars came from the factory with a can of Bars Leaks added to the cooling system. I believe the practice had been in place since the 1950s on all models. That it was still a recommendation on the Series 3 in the mid 1970s indicates that seals had not improved much during the prior 20 years.

Today, I still see cooling system leaks on newly restored cars with modern seals, and a can of Bars Leaks stops the drips but doesn’t harm the cooling system. Just my experience, and my humble opinion.

can of Bars Leaks stops the drips but doesn’t harm the cooling system.

One can, perhaps: people and dealerships dumped in WAY more than a single can, and that path leads to bad things, especially on old and marginal cooling systems.

I have had some minor weeping from a couple of freeze plugs on my roadster. When I changed the coolant recently I put in one bottle and it stopped it. If I’d had a more serious issue I would not have used it.

And what is a sachet?

/sæʃˈeɪ/ uk. /ˈsæʃ.eɪ/ a small closed container made of paper or plastic, containing a small amount of something, usually enough for only one occasion: a sachet of sugar.

And not to be confused with the homophone “sashay”. But hey, it could be worth a shot if there’s a chance it’ll stop leaks!!

Walter I think that these products are for emergency use. If your car isn’t leaking coolant don’t use. If it is and you can’t fix it but need to use the car it’s ok. They do not work permanently, so sooner or later you will need to fix the leak anyway. In the bad old days 70’s into the 80’s Jaguar had a lot of issues, a belligerent work force, constant strikes (all of England did - not just Jaguar) no money, sloppy machine work on worn out equipment, they couldn’t even produce pistons and bores in consistent sizes in the same block etc etc. Then the ultimate ignominy - they were amalgamated with British Leyland. Things didn’t improve until they were purchased by Ford, who brought in modern standards of production. Hence they used a stop leak product in every car shipped. Kinda cheating, but desperation will do that to you.

I have had some minor weeping from a couple of freeze plugs on my roadster.

I had this on the exhaust side of my Mk2. I decided to replace them (3 off). I was pleased that I did as they were really not “bound in” - came out with neglible effort. Perhaps try to make sure that your’s are tight? FWIW. Paul.

Not only are they not permanent, they also aren’t targeted. You have more stuff circulating than you need, and eventually it can do mischief. Some of these leak sealers include sodium silicate, which can cause the anti-corrosion charge to precipitate out of your coolant. Some include relatively large solid particles, which can obstruct fine tubes. If you have a leak in your Toyota, you throw this stuff in and don’t sweat it. But your E-Type is a long term keeper, you want to track down the leaks and fix them the right way.