Yes Kirby, i use a Vac. pump , my cams dont have enough vac at idle in traffic, brakes hard to push!
pump cured it, and made driving smoother with better feel!
ron

3 two barrels, special exhaust manifolds, the unheard of 11.5-1 pistons(100octane and up only ).
soild lifter cam!
heads had much bigger valves & dual springs, course a 4 speed close ratio box!
head cast numbers did not match any other 348s as far as i could find!

well by a few months with it, 409s were showin up, i seen one and thought that twin -4 Barrel manifold could fit my 348, so bought new 1962 409 manifold and two AFBs carbs to fit!
YES magic, that engine must have developed at least 25/30HP more than the 3 dueces!
Ohboy you said it “Fun times”
ron

Yeah it was pretty fast

William, email me at nalutz@hotmail.com

William, yes the rope seal is impregnated and it’s the correct length. DO NOT TRIM or it will leak.

Email sent! Thanks in advance. 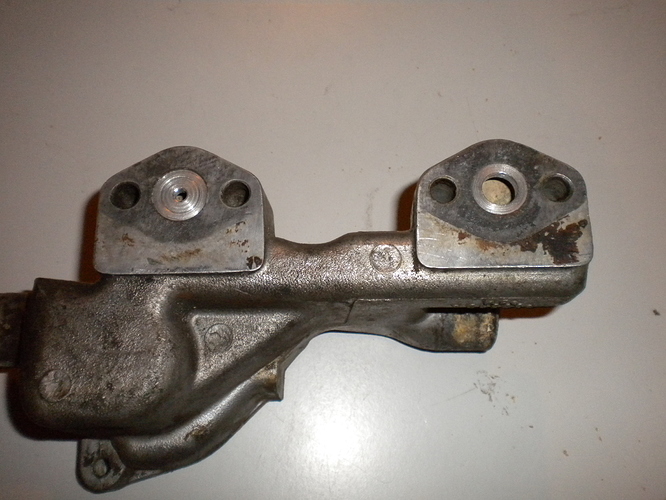 I later swapped it for a bored and stroked 409 (482 cubes) with 2 4 bbls and an M21 4-speed. Jerked second gear one day and ripped the rear, right, lower control arm mount off the frame (bad weld from the factory).

Little update/sneak peek. Now to make the linkages and other little things that will probably take forever. This is just the plate at the end of the Intake runners not going straight onto the head. Still trying to decide whether to bend them over the valve covers for OEM-ish runner lengths or go full “race car” and have the standing up with short intake runners. 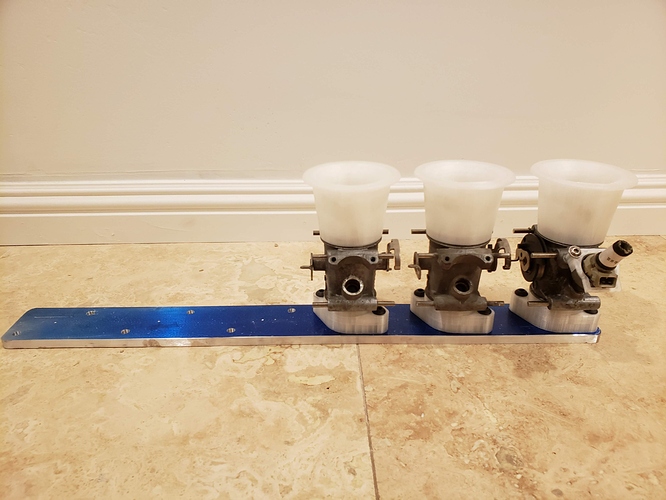 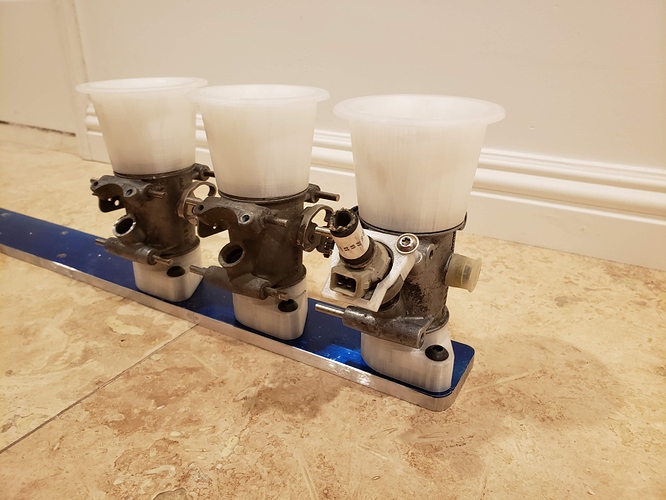 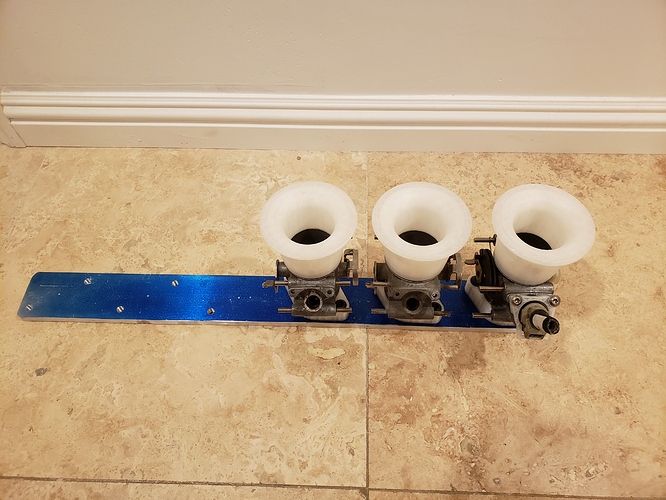 I’ve just been glancing over the thread, and I don’t think anyone has mentioned that the rear seal for this is NLA from Jaguar, but is the same as the Bentley UE733112 which is still available. https://www.introcar.co.uk/oil-seal-crankshaft-rear-p262276

As mentioned the ITBs are going to be troublesome for vacuum, and as short as those stacks are, they’re going to be best at high RPM, which is going to mean the cam will need to be changed/ground (which maybe you need to do anyway) to take advantage of that. All torque/power will be in the upper RPM range leaving less grunt in the lower gears. That’s fine, but it will probably need to be tuned on a rolling road with an Alpha-N capable computer as Speed Density probably isn’t going to work… or may be problematic even with a vacuum tank ported to each throttle body.

Yes I agree with others on the head intake chamfering… that’s… sadly… factory. It’s best to blend that whole thing in and bring the circle out to 34 or Group A’s 36mm. A larger intake valve in the head with that blended in will help too.

It might be a good idea to take advantage of modern tech and DLC those cam buckets, as well as maybe the camshaft (once ground for your ITBs if you’re sure you will go that way). You can probably even put some bake-on moly coatings on the upper cam bearing caps. Make sure you’ve marked them, because it matters that they go back how they came off and back to the heads they originally came off of, otherwise the cam might not turn.

If you’re going in the bottom end… you can probably vapor-blast the pistons w/o damaging them, bake them to bake off any oil that’s not on the surface, and ALSO do bake on ceramic coatings like moly on the skirts and thermal coatings on the crown. You might ask some piston mfgrs if a modern ring package can be put together for the old pistons so you have like a naiper top ring. You can’t do much about ring width/size w/ the OEM pistons, but there may be a few modern things that can be done.

William you could buy these from Jenvey for GBP500 and bolt your bmw throttle bodies on - maybe. Not sure about the fit and 42mm out on the throttle bodies vs 45mm in on these manifolds.

Thank you for the suggestions! To make it easier I plan on having the runners bend over the valve covers like stock in order to mimic the stock intake runner length in order to have a close to stock power curve. That way hopefully I can get sufficient vacuum to a vacuum manifold to run a MAP sensor and tune that way. As for the bottom end I plan for a stock rebuild as I’m in college so my budget is small.

You can probably even put some bake-on moly coatings on the upper cam bearing caps. Make sure you’ve marked them, because it matters that they go back how they came off and back to the heads they originally came off of, otherwise the cam might not turn.

Yes I made sure to mark each one and the direction the came off in.

it will probably need to be tuned on a rolling road with an Alpha-N capable computer as Speed Density probably isn’t going to work… or may be problematic even with a vacuum tank ported to each throttle body.

I would like to stay away from Alpha-N tuning if at all possible, I would like this to be able to drive around town fairly normally without any fuss and I’ve heard the alpha-n is a little finicky at anything but full throttle.

you are a brave man , saying a small budget, and taking on these type modifications!
altho it will be a great learning curve?
ron

It’s all about learning for me, I wouldn’t be doing this if it didn’t force me to learn new things. By budget, I sorta meant that I am willing to spend the amount required for an OEM rebuild and some fun modifications but nothing super fancy like custom pistons and cams. But you never know I might come on here in a few months time wanting to do all that. You know how it goes it’s a slipper slope. I started with just wanted to do a stock rebuild with an auto box and now i’m trying to do ITB’s with a custom ECU and a 5-speed.

My concern is your super super short runners, and probable lack of stable vacuum for a clean signal to the MAP sensor. The speeduino guys are doing something interesting for probably bikes - they just put out a small EFI unit with multiple map sensors (3-4 I think) to connect to ITBs for better low down idle stability. We’ll see how that works. Minimally the vacuum side of every single ITB is going to have to be plumbed into a vacuum box. Also, without changing your cam the short runner length is going to be mismatched. I really don’t know what it’ll do… - likely work - but sap power rather than make it? Now if you could put those ITBs out on long runners - or at least put long curved-over air-horns on them into large filtered plenum boxes…

Yea its looking more and more like i’m going to make long intake runners bent over the valve covers like the factory intake. I got the idea from this Toyota V12 build. Hopefully that will give me enough vacuum for a MAP based tune. I do have to admit i’m sort of doing the ITB’s more for sound than anything so I’d prefer follow the KISS method. https://www.youtube.com/watch?v=Iyw20RCk8Yo

That is Hampton Downs race circuit in the Waikato district of New Zealand.

The ITB Load Settings menu option is only enabled if ITB is selected as the control algorithm in Engine
and Sequential Settings (see Section 8.2. of this guide.) 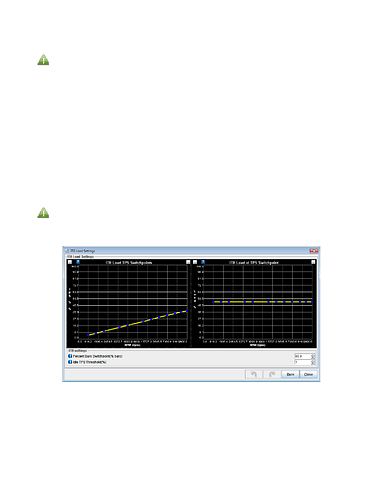 image893×1187 24.6 KB
The left hand curve defines the TPS value where the MAP load reaches %Baro switchpoint. This curve will be
different for each engine and should be set up using values obtained from log files from your engine. Setting this
curve is an important part of ITB mode.

The right hand curve is used to allocate the bins on the VE table to either Speed-Density or Alpha-N tuning. The
area of the VE table below the load value from the curve will be used for Speed-Density tuning and the area
above the curve will be used for Alpha-N tuning. It is recommended that the “ITB load at TPS switchpoint” curve
be set to 50% at all RPMs.