I’m assembling the valve gear on my XK140’s 3.4 engine.
I have new valves, valve seat inserts in the head, valve springs, camshaft/valve stem buckets and shims.
Is it recommended to fit new valve caps and collets, or reuse the originals? I still have the originals, and don’t know if the design changed over time. I think the old collets fit the new valves OK, but not sure what any difference might be - did valve cap or collet design change at all over time?
Likewise, the pressed steel spring seat. Replace, or reuse as a matter of course?

When Jaguar started fitting valve stem oil seals in the mid 60s they altered the collets which became shorter and also counterbored the head slightly where the spring seat sits.
If you’re keeping things as original you can reuse everything, if you are fitting oil seals you will need some different parts.
I thing one of the manuals, (possibly Haynes), explains this update.

I went with the valve seals on the intake valves so I had to replace the guides to suit this update. New valves, keepers and retainers as well, though I don’t remember what was needed with regard to the spring seats. Perhaps the seal and seat are one piece, as on some other engines?

I’ve ordered new collets, caps, seats and stem seals from Rob Beere. They advised that new guides all accept seals so these should fit, even though my engine did not have them. However I don’t think the machine shop did any work on the spring seat area. Is there more machining required? Beere’s didn’t mention it, but best to check before I start assembly.

Hi Roger,
Rob Beere is showing “Modern valve stem seal / spring seat” on their website, which is a one piece spring seat and seal. Are these what you have ordered, versus old style parts? It looks like it fits over the top end of the valve guide so I would ask them if it is supposed to press on or have clearance. If you have oversized valve guides then this could be a concern. I would also ask if it sits in the original spring seat or does away with it.

Also, are you installing seals on intake and exhaust?

Really useful help here, thanks chaps.
Beere’s mentioned separate seats and seals as he knows I’m building a 3.4. Initial plan was just inlets but I might as well do both.
I’m currently on a tour of Northern France in the old Mustang, but will do a mock up with the new parts tomorrow when I’m home. It’s fun setting off all these French car alarms…

One thing you haven’t mentioned is valve guides…at least, I haven’t seen a reference to them…the “seal” type of guides are different from the originals and have a circlip/snap ring near the top of guide to prevent “over insertion” into it’s bore.

Right, back home now - had to drive 3hrs last night from the car ferry home round London with no clutch release bearing in the Mustang, that was interesting and will keep me busy for a few days as it’s booked on a tour of the Pyrenees next month. Oh well.

I’ve checked the parts from Rob Beere and the guides etc. in the head and all looks promising. The new guides do indeed have circlips and a groove at the top. The photo below shows original parts on the left, and new parts on the right. The valve cap is shorter, as are the collets. The seat looks the same. I have stem seals for the inlets only. Apparently RB make the collets themselves as they have had failures with the standard items, even the OEM quality offerings.
Any glaring concerns standing out from the photo?
Thanks for the help, all 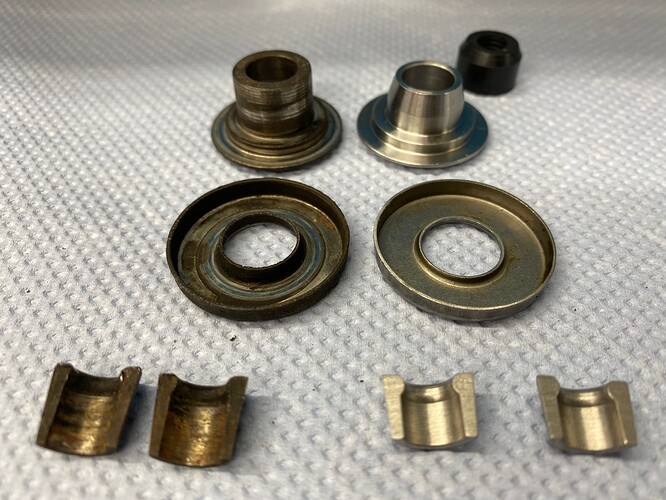 Hi Roger,
It all looks pretty much as expected, and is the old style set up. When I had new guides installed, they were slightly oversized in diameter to allow for a proper press fit, the spring seats had to be opened up in order to fit over the guides. I think that need will become obvious as soon as you assemble one valve. Your new spring seats have a shorter lip on the inside bore, compared to the old, and they are straight versus tapered inward. I would assess all of this when you assemble one to see how it all fits.

It might still be worth discussing with Beere the advantages/disadvantages of their new single piece offering versus the old style cup seal. The new offering has a spring around it and may last longer and seal better than the rubber cup style.

Thanks Tom, very helpful advice - I’ll do a careful trial assembly before going around the lot, and will look at the combined seat/seal option. As the head is machined, if this does require modification I’ll go with the standard setup, but it’s easy enough to check this.

I have a lot to learn about XK engines, so this sort of help is much appreciated from all.

A quick update - just had a chat with Rob, who said that the one-piece seat/seal and the older two-piece are six of one and half-a-dozen of the other, which is to say no real difference. The one-piece is a new design just to get around two jobs with one item, it seems, no performance advantage to either. The new design are a bit quicker to fit but don’t require any machining. The recommendation was that as long as I’m fitting stem seals with the appropriate other parts it doesn’t matter which way it’s done.