Ever since I put the UU needles in the triple SU’s, the car has been extremely difficult to get started if driven hard and then shut down for 20-30 minutes. If I just let it sit for 90 mins it’ll start right up but I think it’s a bad case of vapor lock. Anyone experience this after going richer on the needles?

Did you do anything else to the engine? I have richer needles but also the head was ported and polished, GTJ 25 cams, larger valves, EDIS ignition, etc.

Try going back to the original needles and see if the problems go away.

Vapor lock can’t happen under the bonnet of an E-Type. If it’s going to happen, it will be between tank and fuel pump.If you did have vapor lock, the pump would race when you turn the key, and wouldn’t stop. Nor can correctly installed needles account for this, because any needle you pick will be about the same diameter for the first couple of stations.

A few things to check: Pop off the plenum and see if one or more pistons is stuck. Do this when you’re having the problem. If a piston is sticking, check that the jet is centralized. The other possibility would sticky needle valves. If these check out ok, consider something other than fuel.

The symptoms are so classic vapor lock though. Hard running on a hot day then turn the motor off. No breeze and 5 mins later starts right up. 20 mins no start. Wait 60+ mins and starts up and runs perfect. Don’t see how it could be electrical because it ran perfect for 125 miles, before stopping. If a needle was sticking it would manifest itself in some type of running condition, don’t you think? And then ran perfect again once started for another 125 miles…

Vapor lock can only happen between the fuel pump and the tank. It can’t happen under the bonnet, because the fuel system forward of the pump is under positive pressure. It’s a pretty rare condition in these cars, but it does happen. When you turn the key on, does the pump run and then stop? If it’s vapor lock, the pump will just keep chattering.

Heat soak into the coil or solid state ignition box (if you have one), would do this too.

I never had vapor lock, i run UE needles. I’ve only heard of people using the original UO(?) or the richer UE needles.

What is “vapor lock”?

Had a Mallory dual point which was a real improvement over the lucas. But now running Ray’s EDIS. Runs great

I just watched this video Moss created to explain vapor lock in SU Carbs. According to the video, it occurs from heat soak from the hot engine under the bonnet and vaporizes the fuel in the jet itself. Nothing to do with the fuel lines. Sounds plausible. I suppose there’s one way to test the theory and that’s raising the bonnet next time it’s hot and I’ve run hard for an extended time. Running 123 ignition. The only other items I’ve changed recently is swapping stock mufflers for 2 glass pack type free flow mufflers. 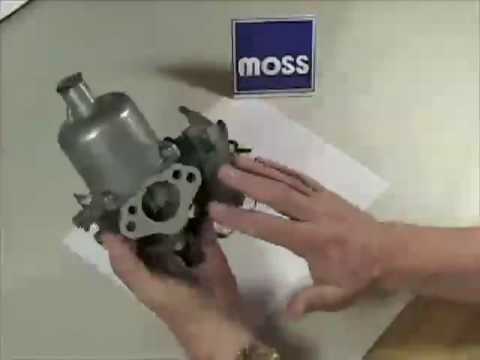 IMO, Moss has redefined vapor lock from its “classic” meaning to something new. Typically, vapor lock has been as Michael describes above. It occurs in the fuel lines, the low pressure line on the “vacuum” side of the fuel pump. The pressure line side of the pump, by keeping the fuel under pressure, raises the fuel’s boiling point to minimize vapor lock.
I am not saying what Moss describes cannot happen, but it is not what I believe most of us describe as vapor lock.
Tom

And with the cross-flow head on the Jag, there is no way the carbs get hot enough to cause vapor problems. It simply does not get that hot on that side of the engine. It can happen on MGs, Triumphs, etc. where the carbs are right next to the exhaust manifold. And, I believe it does happen on V12 Jags. But on a 6-cylinder? No. I’d bet the coil, or electronic ignition if fitted, is dying.

Vapor lock is caused by high temperatures AND low pressures. It’s a problem in vintage American cars with mechanical pumps, because the long fuel line runs past the warm block before it hits the pump. Unlike the Jag system, this run is at low pressure whenever the pump is running. Once the vapor pressure of the fuel exceeds ambient pressure, the fuel turns to vapor, which can no longer be pumped efficiently. When it happens in a Jag,which is verrrrry rare, it’s in the short run between tank and fuel pump. You would hear the electric fuel pump chattering like mad, trying to pump vapor.

The question of fuel boiling of in the carbs is interesting. It’s certainly possible for fuel to cook off due to heat soak. But the right side of a Jag engine is pretty cool, and the carb is separated from the block by a water-filled manifold and insulating blocks. But let’s say that Moss is right, and this really can happen. If fuel is boiling in the bowl, the vapor would rise upwards through the fuel, not down through the jet passage. Fuel would cook off, and evaporate away through the vent line. Once you turn the key, the pump would be supplying cool fuel to take the place of whatever had evaporated. If the fuel line was full of vapor local to the carbs, the vapor would just be pushed along by pressurized fuel from the pump, and would end up going out the vent. So I’ll give credit to Moss for general automotive experience, but I need to see this actually happen in an E-Type to believe.

I’ve been reading. Apparently new style fuels can begin to vaporize at 120 degrees.It gets much hotter than that under the bonnet and heat soak from the block to everything around it. I’ll do a test next time I’m out and running hard. Also not sure this really has an impact but I live in SF where it’s perpetually cool/cold. If there is something to the different fuel mixtures ie. Cold formulations vs hot that could potentially be a factor but I think that’s a stretch.

I’m also going to look at the fuel line route. Perhaps my glasspacks are running a lot hotter than the mufflers and exposing the lines to increased temps as well as. It was 90 degrees and I was running quite hard to keep up to more modern sports cars-Ferrari 308, new GTi etc…

I have driven my E, in stop and go traffic, in ambient temps up to 114F, with 10% Ethanol fuel. Never once had a problem with hot starts.

Two possibilities come to mind, are the insulator blocks fitted, and are the correct fibre washers fitted under the overflow banjo bolts?

I had this exact problem in my MKII, except I was running OEM needles. I also was convinced it was vapor-lock related. And this was in SOCAL where it’s never really hot. I tried every fuel fix I could think of, from mixture and carb rebuilds, all the way back to the pump. Nothing worked. Then went to the electrical side in desperation. After a new condenser and coil, voila, symptoms went away.

When I was having vapor lock problems after a run on hot days I could hear my pump ticking much loader than normal so I am pretty sure it was pumping air instead of fuel. Would be fine again after 20 minutes or so. My solution was a Facet type pump mounted down lower at the same level as the tank. The original pump is still in place and I think I could place the lines back onto it if the Facet fails. A few years later I had hot starting problems again and it turned out to be a combination I think of a poorly made replacement rotor with a loose arm and my original 1968 coil was failing. I changed those along with the coil wire and problem is solved so far.

Set aside the vapour lock theory for a moment, and it’s entirely possible this happening after switching out the needles is coincidental. If not a flaky coil or condenser I would still lean toward a fuel starvation issue, though. Crud in the system getting stirred up during a vigorous run? When was the last time you cleaned out the fuel tank sump and changed your fuel filter(s)?

Have you checked for spark during the period it won’t start?
95% of carb problems are electrical.

No condensor as it’s 123 distributor now BUT the coil could be a culprit. It’s about 5 years old with say 3-4k miles on it but that doesn’t mean much. Would the impedeance be off if measured if it’s bad? Would the car run poorly with a bad coil? It’s running fantastic outside of the starting issue. I do think I have a spare I can swap out…

It DOES get spark when hot. Another thing checked that really had me scratching my head. I don’t have much experience with what a strong spark should look on an e-type but it seemed “OK”…

I never had these issues with the old needles (besides hitting a cliff on power) but it could just be coincidental and I’m jumping to conclusions. Arguably a bad thing…

I did replace the ballast with the coil 3-4k miles ago.

Tank and fuel lines all cleaned up when motor was rebuilt about 5 years ago. Filter in engine compartment looks spotless still… But I’ll take a closer look.

I do not recall hearung the pump clicking away when trying to restart. It’s rather loud so I think I would have noticed but I’ll pay attention to it.

Spark, on ANY engine, should always be bright blue or white, and should easily jump a LEAST 1/4". An orange or yellow spark is too weak.