Hi everyone! So, with the note that I’m not particularly good with electrics, here’s what I know: Ijust got the car running recently, so I don’t have a lot of history with things, and am new to figuring all of this out. Please don’t laugh (too much) at my very wander-y attempts to fix the car…

Since I got the car running, the ammeter has read just slightly below 0. I just assumed that was the normal position and didn’t think much of it until my battery died after 2 weeks (!?!) of driving. The battery was quite old so I replaced it, and put another 800 miles on the car until the battery died again. I charged it up, and everything is fine… But it’s obvious (finally) to me that the thing isn’t charging.

Somewhere in the forums is a description of a way to test the generator (12v, neg ground) (pull off the d and f wires from the generator, attach a jumper directly from the f to the d, turn the car on, check for voltage, which will climb quickly. 13.6v at startup and climbing), which seems to work just fine. Next step was looking at the voltage regulator/control box. The cut relay is open when the car is off and closed when the car is on, so it sounds like that’s working ok too.

But it’s my understanding that the voltage regulator is supposed to ‘chatter’ open and closed when the car is running, and it doesn’t seem to be doing anything. What are the next steps for diagnosis? Should I disconnect the f&d wires from both the generator and voltage regulator, run jumper wires between them, and see if that changes things (to see if the wiring between the gen and reg is bad)? Is there something else I should do?

Please feel free to treat me like a total newb, and explain steps in gory detail. It’s very helpful…

FWIW, I have a 9 post lucas voltage regulator. I can send pics of anything if that’s helpful.

I guess I’m assuming it’s negative ground because that’s how it came (with the neg hooked up to the ground) and the car runs just fine as long as the battery is hooked up. (I assume something would be unhappy if I had the battery hooked up backwards)

That said, I have no idea how to check if it “should” be positive or negative ground…

Apropos of (maybe nothing?), I went out and connected a jump wire from the f on the gen to the f on the reg, and nothing changed. Then I did d to d. Then I did f to f and d to d at the same time. No change. Voltage regulator stays closed.

I think that’s how I’d check if the wiring between the gen and reg was bad, but it didn’t seem to do anything.

What’s next in diagnosis land?

(Thank you, all, for the help)

Normally a ‘53 XK120 would definitely be positive ground, though alternator conversions will reverse the polarity of the electrical system requiring downstream changes to make them compatible. There are also alternator conversions make to look like the original generator but I’m not sure yours is one of them. Something you need to figure out. A generator may be polarised either way. It’s a simple process that takes a few seconds … see video 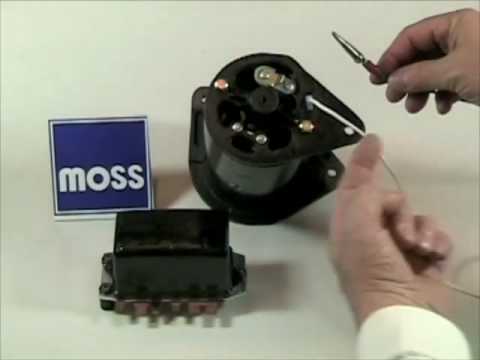 Yep, I polarized directly at the generator (neg to ground, pos to f) while trying to diagnose…

Is there an easy way to tell a gen vs alternator, given the shell?

Again, if the battery were wired backwards, I assume something would have exploded by now

Your car would normally be positive ground. Did you have it converted?

From your pics you have a Lucas Special Equipment dynamo and a Lucas RF95 control box. Standard fitment.

Polarise it at the regulator just the same as at the gen. If it sparks the same the wiring to the regulator is ok, then the regulator will also be correctly polarised. Your car should be pos earth and I suggest it should be connected up that way. It will run fine if the battery connection are swappped, only thing that won’t work is the clock (and radio if you have one) and the ammeter will read the wrong way.

The terminals on the ignition coil are labeled, either SW and CB, or + and -.
For positive ground (earth) the CB or + should be connected to the side terminal on the distributor. Normally a white/black wire.

The Lucas engineers published a technical manual in which they described the advantages of positive ground. Better spark at the plugs and reduced corrosion at the battery terminals.

There is really only one reason to convert to negative ground, that is to add modern components, such as alternator, music devices, GPS.

Be aware that your car could have more recently added electronic devices such as electronic ignition and transistorized fuel pump, which can be bought in either configuration, but can’t be switched over later.

I had a peek, and the ground from the coil to the distributor is coming off of the negative side.

It’s definitely is an old school distributor. Points and the like.

Is there a way to test the magnet/coil in the control box? Or a different test I should do to make sure the generator is working other than what I described the other day?

There is a link to a Lucas document explaining in detail how the regulator works and another one in the thread that goes into detail about testing the generator/regulator set-up.

The first place to check is the regulator relay contacts. The cut-out coil should only close when the generator is producing enough voltage to charge the battery - so it may be this relay’s contacts that are not functioning. The other relay is to regulate the field coils of the generator - these are normally closed, opening when the generator needs to be prevented from producing too great a voltage/current.

Check all connections, particulalry the ground/earth connections. Also use an analog meter to measure voltages - digital ones will jump around.

We have success! Thank you everyone! Clive: the link had the resources I needed (a how all this works combined with a pretty simple walkthru of how to diagnose a problem). Thank you to everyone for the support. Y’all rock!

Back out on the road we go…

Well - what was the issue?