Charging voltage should be much more around 13.8: I would flash the field of the generator and see if it’s actually working to its full capacity first.

As per the Lucas documentation, first establish that the generator can produce adequate voltage. Disconnect the D and F wires from the generator and connect the two terminals. May be easier to disconect the D and F wires at control unit and clip them together. Then measure the voltage between the connected wires or a generator terminal and ground. This should rise with engine speed to above the required 14-15v or so. Do not over rev!

Provided the generator is working, next I would play with the voltage regulator setting to see if it impacts the voltage going to the battery. If you cannot raise the voltage, then something else appears to be the issue - bad wiring, bad battery, etc.

Thx.The generator is very old but probably not the original.I will try connecting the terminals,suppose just use a multimeter and ground the neg part.There is a screw in the voltage regulator on the side which I messed around with—no change,could be wrong screw.I did some sort of check with the hot wire and ground and there was 14+ v

I plan to wire the D and F use voltmeter neg to measure from a terminal and see what happens short of blowing up something.As far as playing around with the v reg I soldered a tiny resistor wire back together from where it burned thru,the measurements were the same as the new one.The new one is now on but I’m not sure if I know where the adjustment screw is.There is a screw on the regulator side which appears the have points but so far adjusting that has made no difference.Another screw is deeper with difficult access.Anyhow thanks for your suggestions.By the way the old regulator would let volts go to 20 plus.Cecil

What regulator type do you have fitted?

No name,22 amp from Moss.Picture is on the online catelog.Looks a great deal like the Lucas but not exactly. 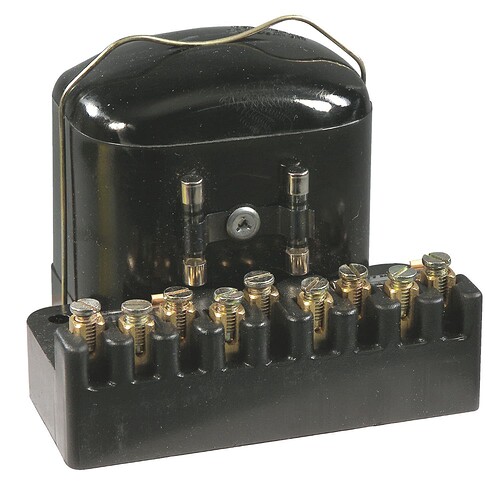 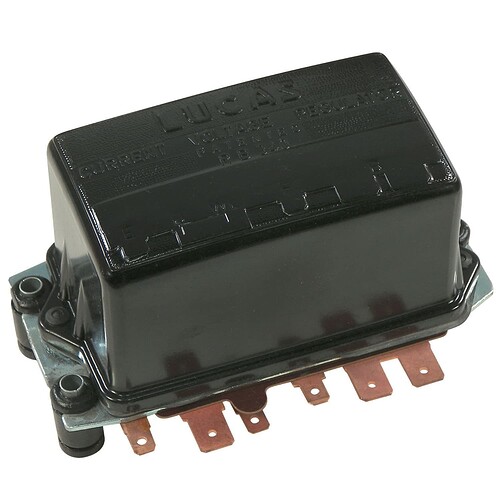 No.Inthink it’s #3 in the middle.#5 was for the 150 so #3 is what I’m counting on,superficially they look the same.This is 22 amps which is what the original was. 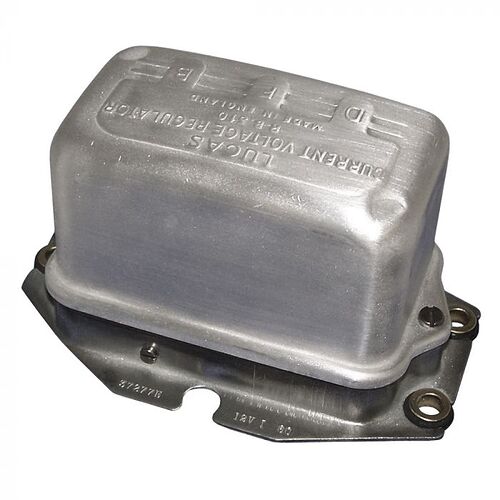 Here’s a video of a person demonstrating a faulty Lucas RB310 regulator on a voltmeter when electrical loads are applied. If you have a faulty RB310, consider sending the regulator to a specialist in the U.S. who will overhaul it, adjust it, and make it like new. 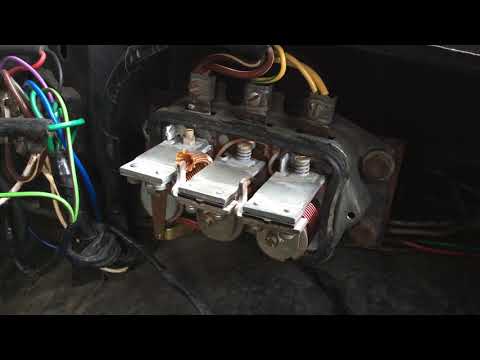 I do indeed applaud your loyalty to the original equipment. But I took that thing apart removed the guts and installed a 60 amp breaker inside. Then installed look a like altinator good to 60 amps so now my cell phone charger wont over amp the thing. Just saying.

From what you say about the ammeter, the battery is receiving a charge when the engine is running above idle. Given this, I would hesitate to do anything - don’t fix what ain’t broken! My car is always hooked up to a charger/maintainer in the garage so I don’t worry about loosing a little charge due to starting the car. It is probably better for the battery to be topped off after a journey by a modern charger than via 50+ year old technology.

If you do decide to tinker then here goes. You have an RB340 reproduction regulator - instead of screws to adjust the settings it uses eccentric disks that have to be turned to increase/decrease the force needed to open/close the points. Here is a picture of one of these reproductions I found on the web: 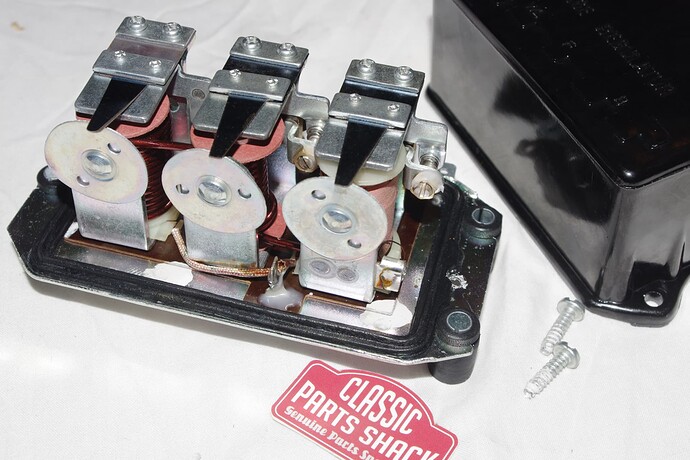 This differs a little in how the disks are rotated compared to the original Lucas units. The disks are a bit awkward to rotate - I used pliers to grip and turn them, it is also possible to turn by hand, but it seems it should be done with a type of two pronged key (the originals used a different type tool to do this). I would also mark the original setting using a pencil mark on the disk so you can go back if you get lost.

To access the disks you have to remove the regulator cover. Originally, the cover was held in place by a type of plastic rivet that have a plastic pin in the middle to splay out the bottom of the rivet. You have to pull/push this pin up, and then the rivet can be pulled out of its hole. If you end up damaging the rivets, a small nut and bolt can be used to reattach the cover. It looks like the modern replacements have screws instead.

When looking at the three disks, the right most one controls the voltage coil. The middile is for the current coil, and the left is for the battery cut-out.

Increasing the spring tension by rotating the rightmost eccentric anti/counter-clockwise will increase the voltage output of the generator. Bear in mind a higher voltage will also increase the charging current - which from your ammeter looks to be OK as is. The voltage should be set around 15V according to Lucas, but I would rather set it a bit lower.

If turning the disk does not change the voltage output (when the engine is revved) then something else is wrong.

A story …
I have a Daimler V8 that had the wrong generator - its specs were correct and it worked (probably for many years!), but dimensionally it did not fit properly. I bought a correct original generator in need of overhauling and rebuilding, which I did. When I fitted the new generator the ammeter pegged positive - the generator was delivering a big current to the battery. Dialling back the voltage setting cured this. It seems the old generator was not outputting as efficiently as my rebuilt one.

So the lesson is - old generators may not be working at peak efficiency, and this affects the regulator settings. That is, a factory set regulator may need adjusting to work properly with a tired generator. Cleaning up the armature commutator, and fitting new brushes is probably all it takes to restore output.

Clive you read my mind and the rest is dead on.I didnt know what the discs were for but I suspected they were not decorative.Th3 battery is not discharging when dar is used so I gonna try keeping my mouth shut and drive in for now.I stated messing with this tar baby bedause the amps were neg to pegged out and when testeed volts were up to 25.If I have trouble will
Fiddle with the discs.Really mean it,thanks.If you come south will buy you a beer.Cecil

That is exactly what it came with but went haywire.The replacement that I got was $49.I have a feeling the restoration would cost more so I’m muddling with this replacement.There was a tiny copper wire going to a resistor that was burned thru so I fixed it.The response on the old is now the same as the new so I’m gonna use as is for now.Appreciate the input.Cecil

Now everything is connected correctly but the problem is the charging voltage which may go as high as 17v.I need to adjust but never have done— certainly not afraid but can’t find exactly how on the Lucas replacement RB 340.If I can’t get it done I suppose I can disconnect the input from the generator and run off the battery but I have to drive it about 35 miles round trip for a show next weekend.Thanks for help.Cecil

I am reviewing your description of how to proceed with decreasing voltage on the right discNeedle nose pliers ought to work,rotate clockwise.

As I see diagrams of the rb340 Lucas v reg the right disc looking at it from the front is the battery stuff the current disc is in the middlle and the disc on the left is voltage which is the one I need to adjust downward or counterclock wise since the voltage goes to 16 at about 2000 rpm–Is this right???

The voltage regulation is done by the right hand coil in the photo I put into earlier message.

I would be suprised if a new regulator is so far out of adjustment to deliver 17V. Are you using a digital voltmeter or a moving coil voltmeter?

A moving coil will be more accurate here - it will average out the voltage as the contacts vibrate. A digital meter may report the instantaneous voltage which will bounce around.

digital.Am I adjusting the B disc? This digital doesn have much bounce,settles down quickly.

You need to adjust the voltage regulator which is the right hand relay/disk in the photo.

All diagrams I have seen - as well as the photo - show the same order. Left most is battery cut-out, middle is current regulator, and right is voltage regulator. The voltage regulator has the fine wire windings.