As I mentioned in another thread, this weekend I noticed a small puff of white smoke from behind the drop down instrument panel. By the time I was able to unscrew the two thumb screws holding the panel the smoke was gone. Later that day I noticed that both the water temp and fuel gauges were reading zero, as if they weren’t even powered.

Given that I had replaced the old voltage stabilizer a few months ago, I suspected it was the stabilizer, especially since it is in the location that I saw the smoke. Today I tested it in situ with my voltmeter. It was showing 12.7 volts in and out. I removed it from the car and don’t see any visible sign of it being damaged, but I set it up on my bench with a 12v transformer. I’m getting 13.73 volts on the input side from the transformer and 13.73 volts on the output side.

Is this an acceptable test to confirm that it is shot? I see these items from the usuals for $11-13, but Terry’s has one for $65. Is this just gouging or is this a better made unit? I saw an old thread were @Michael_Frank at CoolCat had them, is this still the case?

Buy a solid state one from coolcatcorp.com. You’ll never have to touch it again.

Yes it is broken.

What it ought to do is put voltage through a heating wire which makes a bimetallic strip make and break contact on to the output, so the 13.73v remains connected to the gauges about 10/14ths of the time, thus making the gauges appear to run from a 10v supply.

A solid state alternative, made from a 7810 chip will work just as well and you can make one of these for just a few dollars.

Here’s one I made earlier… sitting inside the original housing.
http://www.jag-lovers.org/snaps/snap_view.php3?id=1287914415

You can find plenty of discussion on this topic on this forum or on the UK forum.

I removed it from the car and don’t see any visible sign of it being damaged, but I set it up on my bench with a 12v transformer.

Did you connect the negative lead to the body or bracket of the stabilizer?

If it is not grounded it will not reduce voltage.

Did you connect the negative lead to the body or bracket of the stabilizer?

I built my own solid-state voltage stabilizer. I learned a lot! It took me three tries to get one that survives the extremely dirty voltage in a car. When you turn off the ignition switch any stored energy in the ignition coil will run back into the car causing a big voltage spike. My final iteration, that is still working, involved a resistor and capacitor on the input of a solid state voltage regulator. I also added a zener diode to clip any spikes just in case…
If you want to know what a zener diode is, just Google it.

Well, I’m pretty sure I found the source of the puff of white smoke on Saturday, especially since it smells exactly like the smoke did. 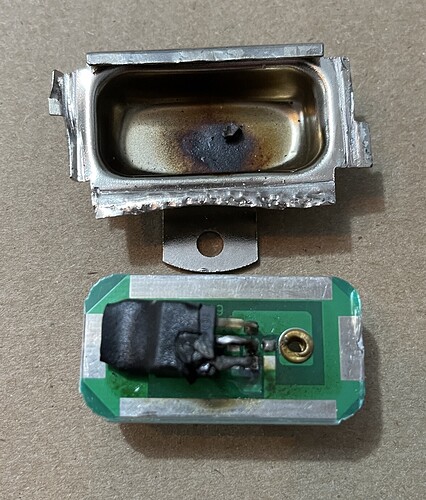 @Michael_Frank is out of the negative ground instrument voltage regulators and it doesn’t appear that he will have any soon. So I guess I will continue to hunt for something better than the $11 junk from the usuals.

You can use that one, just remove the chip and replace with a fresh 7810. The chip has no protection from surges and ripples, and I wouldn’t rule out a downstream short. I’m not going to redesign it for them, but you can easily return it to working order with a new chip. Just make sure you check your wiring, it’s easy to foul the instrument wiring on the meter U brackets.

I have soldered many times, but rarely on such tiny wires as the three wires on the 7810 chip. I’m not sure I’m that precise. I’ll likely just buy another inexpensive one until you are re-stocked on yours, it looks head and shoulders above the retail junk.

Gee…I wonder if the Rovers I have used a similar IVR? If so, I would be glad to send ya one…I’ll check.

Just make sure you check for shorts. There’s a good chance that chip was popped by high current.

I found one today while sorting out the license plate lights, I think/hope that was it.

I purchased another cheap one from one of the usuals, so for now my instruments are back to working. I like the idea of the one you carry. If you will let me know when you get it back in stock, I’d like to buy one from you to replace the cheapo one in the car now. Thanks…Bob