is everyone else able to access the little circle in the upper right of the page that shows you when a response has been made to a post of yours or that you follow?

Because, I get a notification of response but clicking on the circle just gives me the “circle of death”

It works for me.

and that would be my personal “situation normal…”

I get the same, used to work from any forum page, then it would work only from the home page. Then for a period of time I got the “circle of death”, now I get nothing when I click on it.

I can only reply if the copy comes in my e mail like this. Otherwise I have no idea what thread the responses apply to.

Bob,
Are you using an Apple Mac also?

For those who are having problems:

Are you using Windows or macOS (or Linux)?
Which version? I.e. Windows 10, macOS Big Sur?
Which browser, and which version? I.e. Chrome version 92.0, Safari 14.0?
What exactly is the problem? Please be as specific as possible.

No I usually am on my Apple iPad

Same one I have been using. for years.

When I open the page I may see a notification that people have responded to a thread I am on but cliickin on the blue ball opens a box with the circle of death on it. I have on occasion waited a long time for that resolve but instead it times out. Then the indication of messages is gone. And it says "you have no notifications.

Another problem I have discovered is that I was following Joe’s long thread in reverse, looking for something in particular and after scrolling up a couple of times the computer “jumps” up 6 messages or so all by itself. And it will do that jump ever so often after a couple of scroll ups.

For those who are having problems:

Are you using Windows or macOS (or Linux)?

Which browser, and which version? I.e. Chrome version 92.0, Safari 14.0?
What exactly is the problem? Please be as specific as possible.

Ditto, same thing on mine; scrolling by itself to previous posts in a long thread.

No I usually am on my Apple iPad

If you’re not sure how to find out, please visit this page:
http://www.whatbrowseramiusing.co

Please report back exactly what the page says about your browser, and your operating system. Like this, from my iPhone just now: 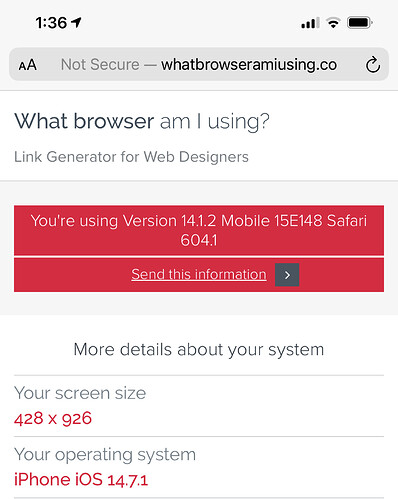 Also says it is up to date.

Also says it is up to date.

Yes and no. If you have an older model iPad, this may be the latest version of iOS offered for your device, simply because Apple has stopped supporting it. So, in that sense it’s the latest.

It’s not the latest version of iOS that Apple has released, that would be 14.7.1, with 15 coming out soon.

That said, this Discourse (our forum software) page does say that iOS 10.3 and newer is supported, so it should work.

I have an old iPad 2nd generation at home, like yours it’s stuck at some older version of iOS. I’ll see if I can dig it out tonight and see if it works, or if I can replicate the problem you’re seeing.

Have you tried accessing the site from some other device, just to see if the problem goes away then?

Planned obsolescence I suppose. Works fine on my desktop (which I seldom use).

You could also try downloading the Chrome browser from Apple’s App Store. I just checked, apparently it’ll install on iOS 12.2 and later. So, it should work on your iPad. That would give you a 100% up-to-date browser on your device.

I’ll try it, thanks for looking into it.

See…it took me a while to respond because I can’t access the little dots and for some reason I didn’t get a cc in my e mail on this one.