Weber set and manifold on ebay

Just in case someone is in the market for triple Weber’s. Needs a linkage and other bits but not a bad start. Carbs are made in Italy instead of Spain like some I’ve seen.

I SHOULD ADD THAT I HAVE NO INTEREST IN THIS SALE. JUST THOUGHT SOMEONE MIGHT BE INTERESTED.
Robert 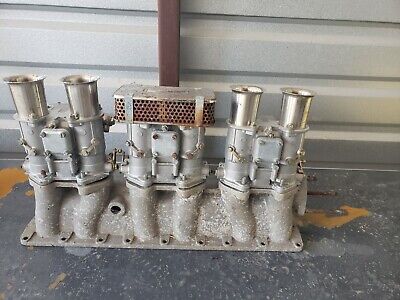 Jaguar e type tri webber carburetors xke xk120 xk150 e-type. Condition is Used. Will ship international but it will be actual cost, price is for domestic only.

I cannot be 100% sure that’s an E manifold: if bidding, ask to see better evidence of the ‘tilt’ that is needed.

Those are older Webers, pre-Spain-built ones. Good carbs. Fairly sure tgey are also 45s, which are better suited and more adjustable than the 40s.

better evidence of the ‘tilt’ that is needed.

Interesting. Like most of us here, I’m aware of the need for the tilt, or downslope, of the SU manifold on an E, but since the Weber’s are almost horizontal, vs the SU’s which are fairly tall, is the same tilt required to create space?

I’m not sure that’s an E-type set either. I had one for my car, never installed, sold in '02 but this was the drawing that came with them for installation.

Here’s the photo from the ad. Looks like the same brand of manifold. And the bolt pattern on the head side looks right. Fuel line connection looks right, but the center carb has a throttle connection on the “wrong” side? Is that connector reversible to the other side of the carb? 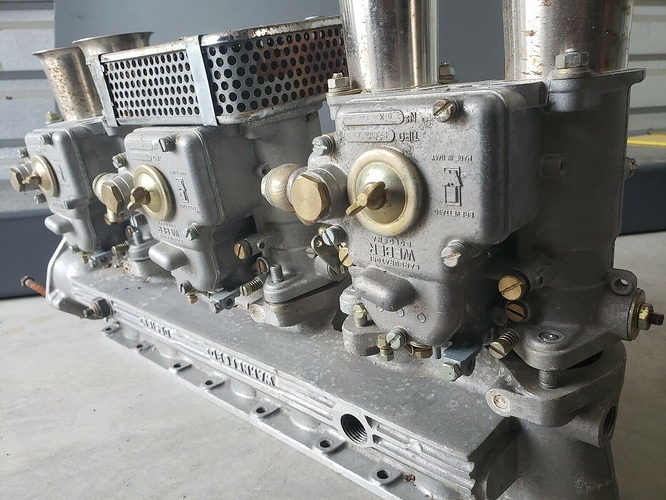 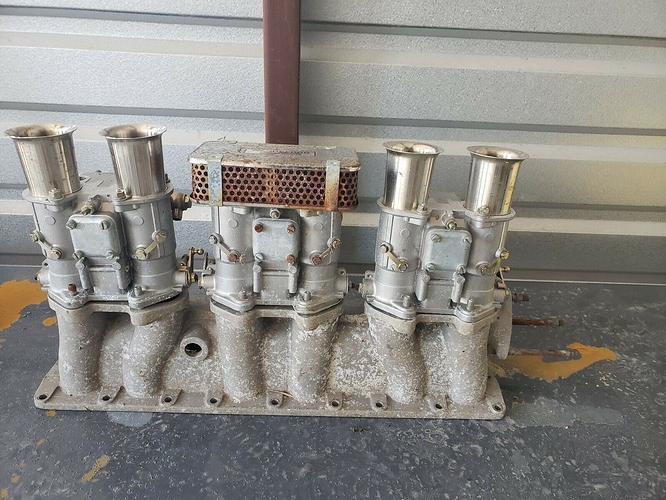 Why are there no air cleaners on the two outer carbs? Was the owner angry at, and wanting to punish, those cylinders?

Matching 45DCOE bodies looking at the stampings although why the ram tubes and filter mismatch?

Possibly these were fitted in a car without enough inner guard clearance for the front carb (which has incorrectly been put in the middle for the photo). Mk 2 Jag has this problem with triples; XK series might as well.

Throttle arm positions and fuel feed are all pretty modular on Webers so I wouldn’t read much into that. There is no throttle linkage and the devil is in the detail as that is going to have to be made, which isn’t always easy, and the cost for the parts is not insubstantial.

I can’t comment on the manifold apart to say that the Webers sit lower than SUs and the manifold looks straight out from the head so it might all fit under the E type bonnet. Stud pattern looks ok.

Final problem is that the whole lot needs to be rebuilt and THEN tuned to your car.

Looks cheap, but to get it running on your car, assuming that the carbies aren’t damaged (air bleed screw is a potential problem) you’re looking at tripling your buy cost minimum.

“… is the same tilt required to create space?..”

No, had them on my car, LHD, RHD might have a problem, no idea…the webers go on perfectly horizontal.

I have dual Weber 42 DCOE’s on my Cosworth Vega and they are great but can be tricky to dial them in for each application. Make sure you have the resources to set them up properly initially and they most likely will be very reliable. I briefly drove one 4.2 E-type that had them and was not sure they were enough better than my ZS carbs to make me want to switch though. Could be they were not well dialed in though.

They were impossible to tune and very expensive to tune as you need 6 of several jets, air correctors and emulsion tubes every time you want to make an adjustment

Performance was much better with the SUs

Hi, I honestly have no idea… I apologize I should have made it clear it’s not my auction on eBay. I just saw it and thought someone on the forum might be interested.
Robert

Read the sellers feedback. Looks like someone in Germany had a problem with the Webers.

If it was a stock engine, Webers buy you nothing, except eye candy.

Boy howdy: when setting up a customer’s race car with Webers, Id budget at least one day of track time to do it correctly.

Garth. I’m sorry but i don’t own these. It’s just an auction on eBay.

Others would add that E types are eye candy And I’m ok with that!