Unashamed commercial plug … but I’m so excited about this development I simply had to share it here!

Public launch of our new quad-cam V12 engine (essentially a pair of DOHC heads that bolt onto either a 5.3 or 6.0-litre block) 21st February at Race Retro in Coventry. 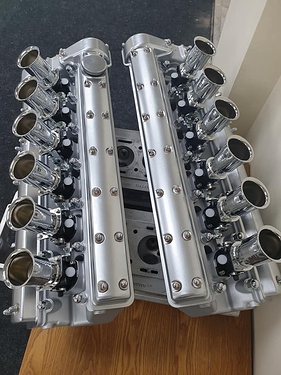 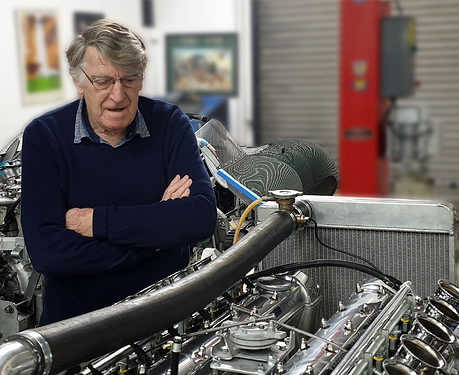 Privileged to have been joined today by ex-Jaguar and Coventry Climax’s Richard Hassan (son of Jaguar’s late Walter “Wally” Hassan).

Richard followed in his illustrious father’s footsteps becoming a talented race engine designer and developer. He joined Jaguar in 1957 as an Apprentice before joining British racing driver and racing team owner John Coombs in 1969. A year later he moved to Coventry Climax (which had become a division within Jaguar) and worked on many of their legendary racing engines.

Richard set up on his own in 1977 and continues to run his own successful engineering business in Coventry. 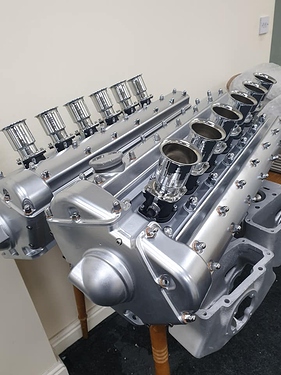 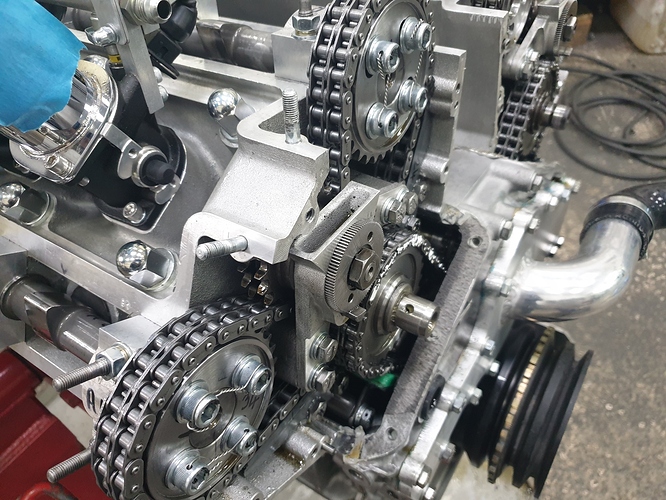 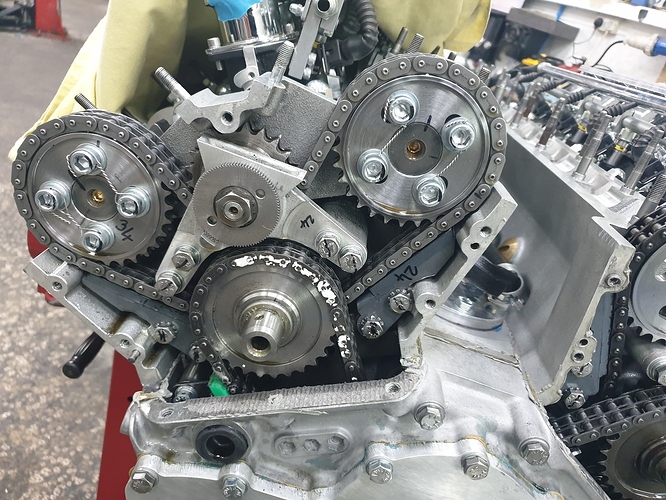 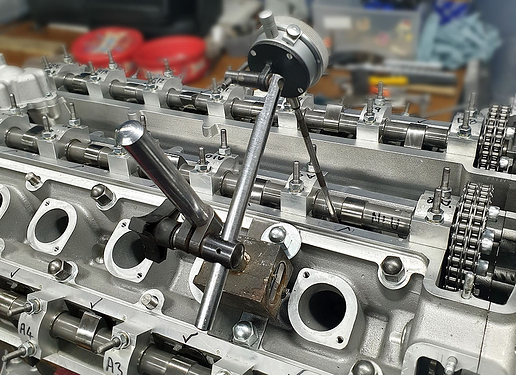 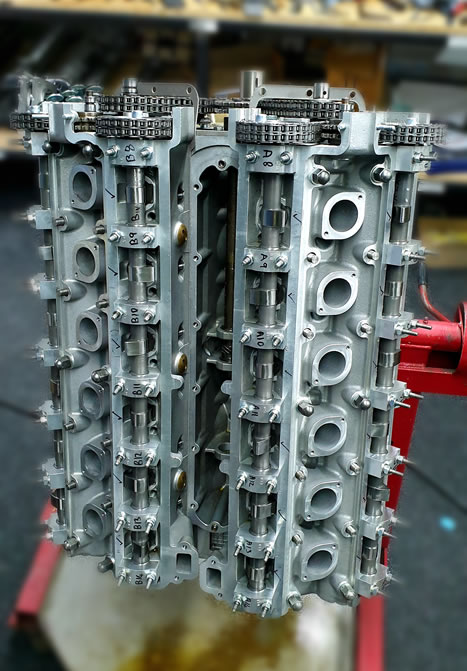 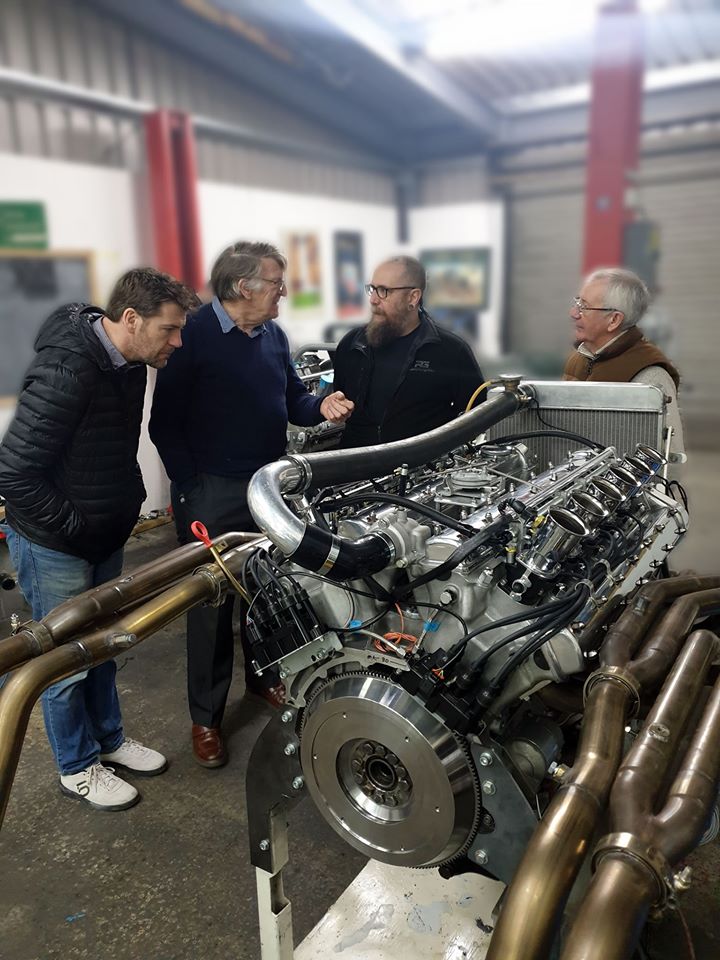 Makes me wanna put one in my hot rod!!!

Show me a picture Paul!

Neville, if I had the money for one of those GORGEOUS engines, I’d be over with WINGS on for one!

boy,oh,boy, what a marvel of engineering, be an interesting to do a cam change and degree the aspects!
love it!

I knew you’d “get it” RonBros

The cam profile we are running on the engine pictured is similar to the ones used for the 3.8 litre injected Lightweight E-Types. This is a 6.8-litre. Numbers are as follows …

Will soon transfer to an engine dyno and see how it sounds north of 8000 rpm - and what sort of numbers we can coax out of it playing around with cam timing/mapping.

Its wet-sumped at the moment (TWR-style sump not fitted yet) and we still have to fit a crank scraper.

RonBros/anyone - do you have any experience of breathing from the block? Seems to us there will be a need for additional breathing - not just from the heads.

So will these be available to the general public for purchase? I dont think i’d ever be able to afford them but maybe I can take a loan out

Amateur question: I see you’ve used the original spark plug holes for intakes. Where are the plugs now?

I don’t know if you can see from this picture but the plugs are adjacent to the inlets. I wanted to make access much better than the later SOHC engine. 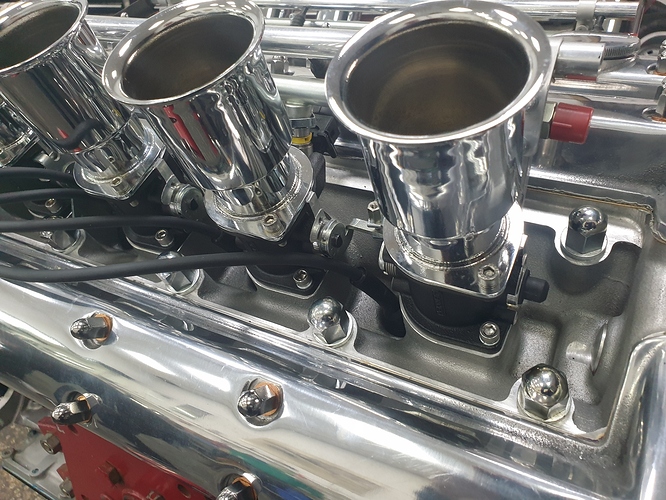 William - its probably best not to be too commercial in this forum. Please contact me privately or email neville@buildingthelegend.co.uk

They are available to the general public - either as a complete engine or individual parts for self-assembly. They are basically a pair of DOHC heads that drop onto the later SOHC block - 5.3 or 6.0-litre. I want them to be accessible to fellow-enthusiasts so you are likely to find them affordable!

You describe the bore as 96mm. The stock V12 has a bore of 90mm. Does this mean the stock V12 will need to be opened up to 96mm to clear the valves in these new heads?

Only two valves per cylinder?

I see the XJ13 in the photo with a Quad-Cam under the rear glass and another sitting in the foreground. So, you already have two complete engines?

Is there going to be any way to fit air filters?

Yes - the heads are designed for a 96mm bore. The block needs to be bored to accept new liners (we supply). This can be done on an exchange basis or by having the machining done locally. It’s the common mod made to a 6-litre to achieve 6.8. It’s not just about clearing the valves of course - they are hemi heads.

Yes - 2 valves per cylinder. The engine takes its inspiration from Baily’s “XJ13” Quad Cam and the long-lived classic XK 6-cyl. From the outset I set a number of ground-rules, one of those was to remain true to the basic architecture of the XK engine - a robust and proven formula which lasted from 1949 through to the 1990s and which still runs in historic racing today. It is an unashamed attempt to offer an engine, inspired by Baily’s quad-cam, of the type which could have been heard howling down the Mulsanne Straight in the 1960s. I haven’t had any enquiries from Greta yet …

The picture of the engine “under glass” is an engine installed in the Ecurie Ecosse LM69 (www.EcurieCars.com).

Air filters? Depends on application and the owner’s imagination. Different length/configuration of velocity stacks are possible. I have already had enquiries from owners of V12 saloons such as XJ V12s, S3 E-Types, Mk10s and even a MkVII. The engine was designed primarily for use in our XJ13 re-creations (www.BuildingTheLegend.co.uk) but will have applications in other cars - not just Jaguars (maybe not just cars?). We are currently working on the practicalities of S3 Jaguar E-Type, XJ40 and Mk10 installation. We will be working with owners on these cars and can report on progress if anyone is interested?

I will be releasing more details at the forthcoming Race Retro in Coventry where we will be present with not only the engine but also a XJ13 fitted with an original quad-cam prototype - the initial inspiration for this project.

I would absolutely welcome any comments/thoughts you may have.

I don’t understand much of this, but it looks like a work of art!

How much weight do these quad cam heads add?

Each head weighs less than the equivalent XK 6-cyl head and certainly less than the original Jaguar prototype quad-cam V12 head . Please bear with me John while I find some to weigh and compare!

We will be working with owners on these cars and can report on progress if anyone is interested?

I think most of us would be VERY interested to see progress.