I bought an ‘87 Vanden Plas and it is being shipped from Virginia to my home in Seattle. It should arrive in a week or so. Can anyone tell me what color it is? It should be either Bordeaux Red Metallic, Crimson Metallic, or Grenadier Red. 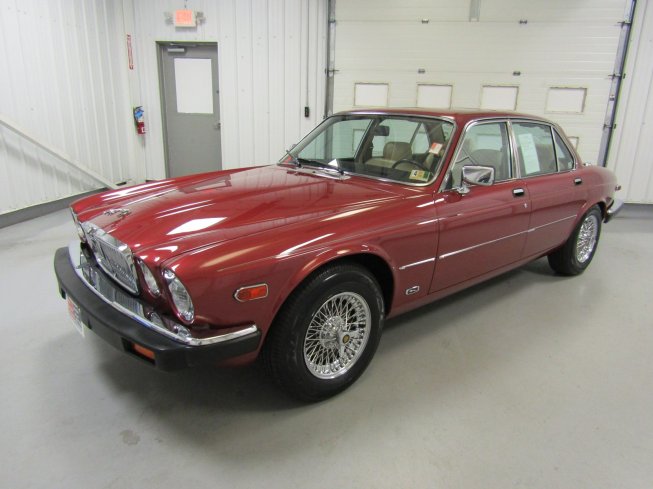 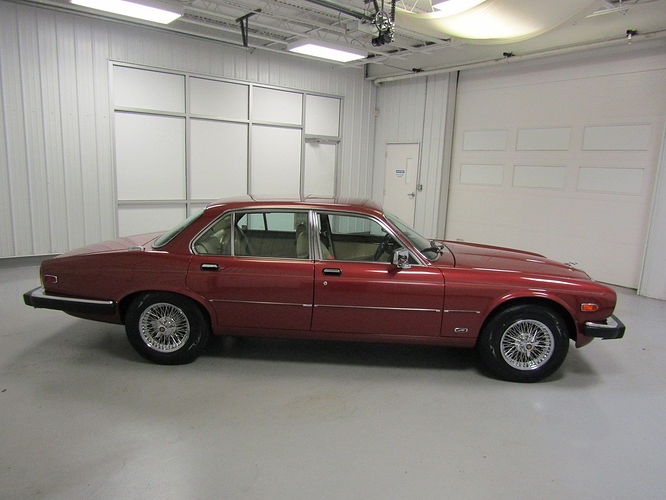 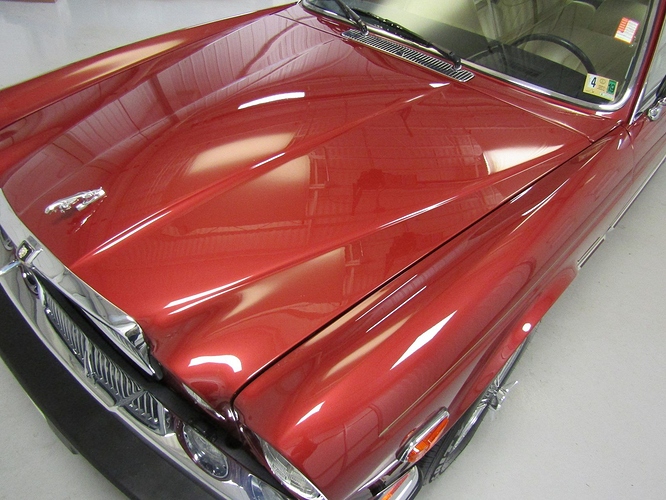 Pretty! the paint code is on a plaque in the engine bay above the wheel arch, I can look the number up.
You’re in Seattle? I’m in Olympia

Thanks, Mark! I’m in Snohomish.

I don’t have the car yet (it’s still waiting for a carrier in Virginia to pick it up). I don’t have an ETA yet. I’d like to order touch up paint, which will take a while to arrive, so I have it soon after I get the car but before the All British Field Meet the middle of this month. I’d like to be able to touch up any chips before I show the car. That’s why I was hoping someone who had the same color car could tell me the color.

Have a great weekend!

Oh, and I may be at the all British Field meet… If I can get a car there. haha

Please say hello if you come to the ABFM.

I’d probably wait until you get the car, or ask the seller to pull the paint code of the car. Jaguar was famous for not sticking to the colors on the model year color car. The 3 reds came off the color options in ’87. It’s possible that it could be a 86 color too.

I’m not sure that I’d run out and pick up paint without the car handy.

My Series I the paint code is primrose yellow but according to the color car in ’72 primrose was for E-Types only. Go figure. My ’85 XJ6 paint code doesn’t even show up on the paint color options for ’85 or ’86. I ended up pulling a painted bolt off the car to color match. I think the paint fumes got to the painters. J

Danny,
It looks a lot like Cranberry Red Metallic to me. The Jaguar Color Code for that color is CEC.

I agree with Mark; it’s prudent to get the paint code first.

As long as we’re guessing… The only reds I’ve seen for VDPs of that time period are Cranberry and Bordeaux. There are 2 paint codes for Cranberry Metallic CEC and CEE. I have no idea what the difference is. My 86 VDP is CEE. Bordeaux Metallic is CEK. It could be any of them.

The last Series III XJ6 for public sale was built in April 1987 and sent to Los Angeles in May. The VIN was 477823. I wonder if it is still out there and if the owner knows what he has?

Many people (and parts suppliers) are unaware of these late Series III XJ6s.

I guess I should’ve explained this a bit better. Here in the US, I thought the last of the Series III was '87; then the XJ40’s took its place. Actually, the Series III carried on everywhere other than (the US) until 1992, when the last 100 XJ12’s were sent off to Canada. Came in 1 Color Black Cherry, Biscuit interior with a dove piping around the edges of the seats. There’s a Plaque on the console above the shifter indicating which number of the 100 built that particular car is. There were two up for sale in Canada one was in perfect condition and went for over $25,000.00 US. The other I tried to purchase was a bit clapped out and, serious signs of water leaks, rusted in all the usual places & didn’t run and hadn’t been driven in almost 10 years. It sold for $6500.00 I still kick myself for missing it.

I think it’s Bordeaux too. But I think I’ll wait until I get the car before I order touch up paint.

I agree with you and Mark. I’ll hold off until I get the car. I’m IMPATIENTLY waiting for it to arrive! :-/

Thank you, Ron and Mark!

I guess I should’ve explained this a bit better. Here in the US, I thought the last of the Series III was '87

then the XJ40’s took its place.

Actually, the Series III carried on everywhere other than (the US) until 1992,

Right again, although these were all V12 cars after April 1987.

Um…I don’t think the famed Canadian ‘last 100’ cars were necessarily the last Series III V12s built. But they were certainly the ‘last 100’ sent to Canada. All very high spec cars.

A small matter but the “XJ12” desingation for the Series III V12 cars was dropped after 1983 or so. They were badged as VanDen Plas or Sovereign depending on market and trim, or Double 6 if a Daimler. 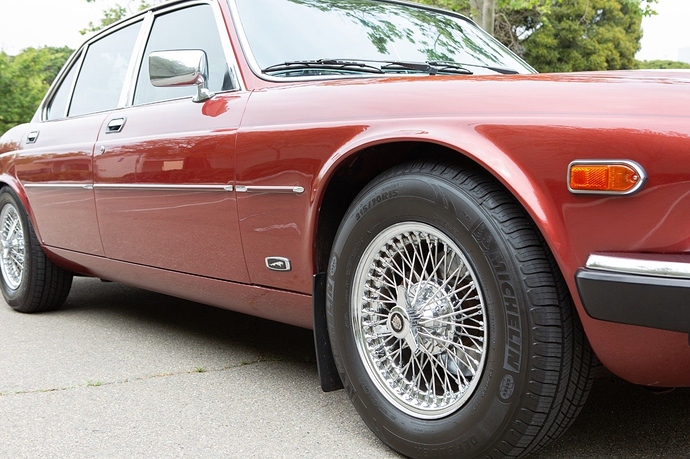 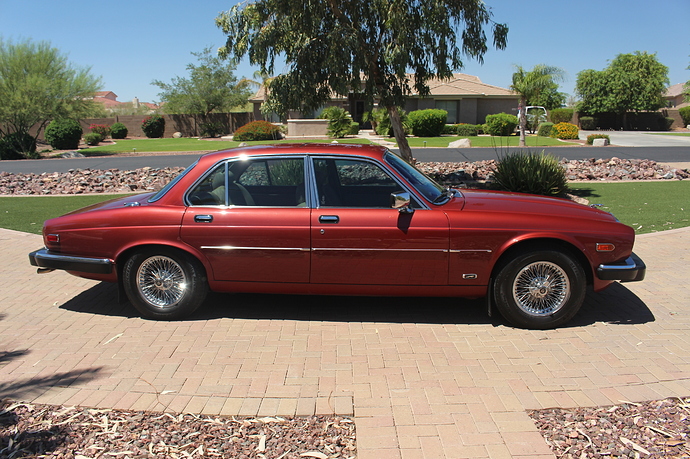 Beautiful car, Paul! I can’t tell if it’s the exact same color as mine. It looks like it could be. Thank you for posting them with the color. My car is due to arrive on Thursday so I’m going to wait until I get it before I order the touch up paint.

How do you like your wire wheels? Have you had any issues with them? They look the same as mine. I think mine are 60 spoke. Maybe yours are 70, which I understand is better. I’ve never had wire wheels before and I love the look. I’ve read some threads on here and see not everyone cares for them. Some have said they change the handling of the car and they have to be tuned from time to time. I’m not going to be doing any hard driving in this car so I’m not too worried about the wheels affecting the handling. I’m pretty excited mine came with them.

To be honest Danny, I’ve barely driven the car. It was in a car collection for a long time and I bought it in June from a guy in Los Angeles and trailered it to Phoenix. Since then I was able to acquire an E-Type in Saint Louis which was what I really wanted so I have it up for sale on E bay. I’ve driven a ton of Jaguars and I haven’t noticed any discernible difference with spoked wheels. I do prefer the look though. They are challenging to clean. I found a cone shaped soft brush really helps along with compressed air to dry them off.

Danny, you are absolutely right that your color would be Grenadier or Bordeaux. I am looking at original paint chips for 86 and 87 (and Crimson, counterintuitively, is a bit dark). The 86 color Cranberry is close, but the factory switched paint technologies beginning with the 1987 model year from thermoplastic acrylic to “ordinary“ clear over base, so that none of the colors carried over, with the exceptions of Jaguar Racing Green and Black.

To make things a little more difficult, Jaguar discontinued the plate on top of the wheelwell under the hood in 1987, but the VIN sticker above the hinges on the driver’s A pillar will have the information you seek.

That’s very interesting about the change in paint technique. I didn’t know that. Was it an improvement?

I’m hoping to get the car Thursday or Friday. I’ll definitely look for it inside the door. I didn’t know that location was changed either.

the “XJ12” desingation for the Series III V12 cars was dropped after 1983 or so. They were badged as VanDen Plas

Spot on, Doug. IIRC, that point, “it’s a V12 Vanden Plas, not an XJ12” was constantly repeated by some bloke. I don’t remember who he was, but maybe you do. Was he the one who carried pine needles with him wherever he went? Not sure for what purpose.

the “XJ12” desingation for the Series III V12 cars was dropped after 1983 or so. They were badged as VanDen Plas

Spot on, Doug. IIRC, that point, “it’s a V12 Vanden Plas, not an XJ12” was constantly repeated by some bloke. I don’t remember who he was, but maybe you do. Was he the one who carried pine needles with him wherever he went? Not sure for what purpose.

As the story goes, I was the one carrying pine needles. The other bloke was the victim of my dastardly scheme.