What did you do to your E-Type today?

I’ve got two complete bonnets and an extra shovel

Today I removed the bonnet of the red roadster using an angle grinder.

The advantage of using this method was it took three minutes. The top hats were seized and the frame was rotten clean through on one side. 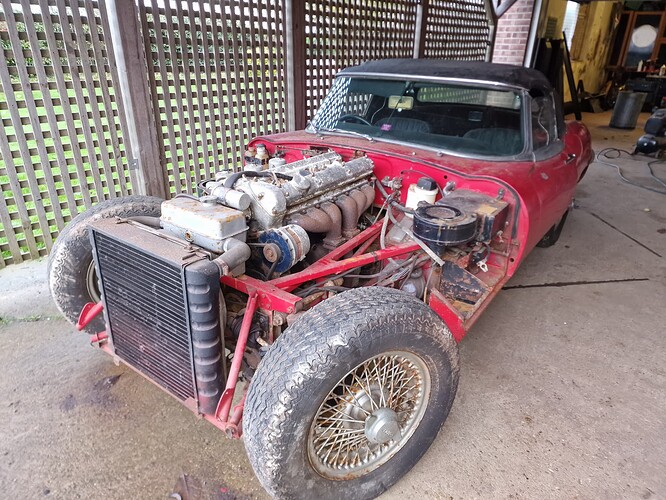 I then disassembled the bonnet to see what was salvageable.

That little lit however is probably the best part of £1,000 if I had to buy it all new.

The rest is scrap or usable for panel sections only so is in storage. Chuck wouldn’t throw it away so neither am I .

I also did a bit more on the grey FHC, it is very nearly finished.

I closed the tailgate and that was it, pulling the release did nothing. It was stuck shut.

I decided the problem must be at the seat end of the cable, so a carefully undid it all with the seat in place only to find there was nothing wrong with it.

I clambered over the rear and undid the catch bolts from inside the car, releasing the tailgate.
With the tailgate open, I could remove the trim panel and the catch mechanism.

Inspection of the mechanism reveled is all to be intact. A mystery?

I put it all back together and it didn’t work! At that point I gave up, then I ungave giving up and removed the rear catch mechanism again.

Closer inspection of the wire pinch bolt revealed the head of the bolt was bottoming out before the cable was being pinched, allowing the wire to slip when the release was pulled. A new bolt 3mm longer solved the problem.

I then fitted the ITG back plate to the throttle bodies, making sure it cleared the closed bonnet, marking the bolt positions with a scribe and the using a hole cutter and drill bits. I extended the throttle cable by fitting a much long cable, fitted a return spring to the throttle pedal inside the car, finished off the mudguards with the rubber strips and mounted the ECU properly behind the glove box. 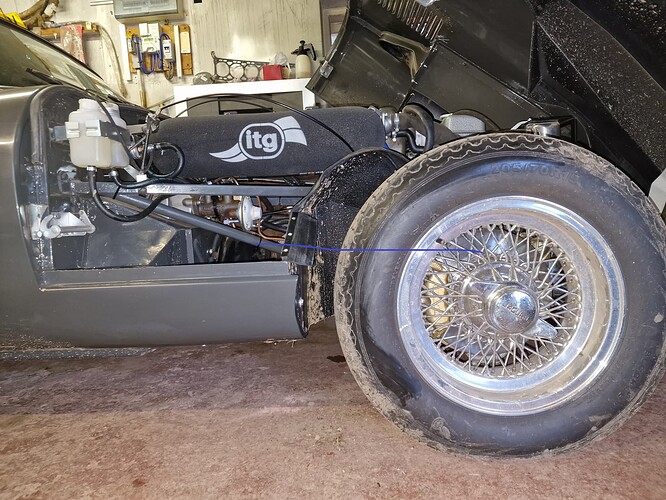 It is running very well on start up, however it is rich as I cannot set the TPS position. (throttle position sensor).

That is because I have the wrong USB cable. 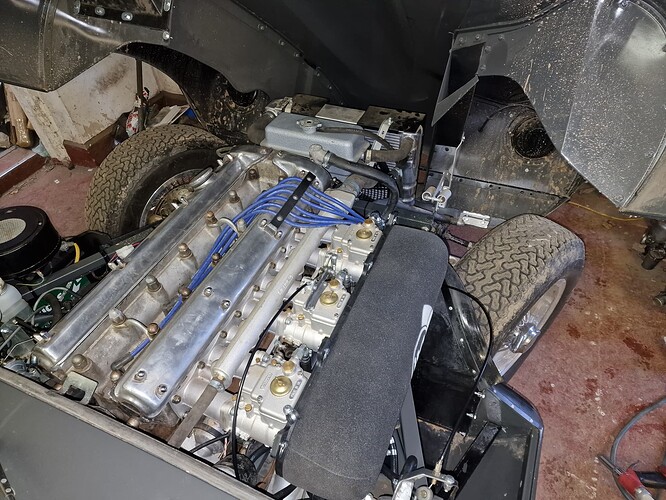 I performed this task on the silver car years ago and have not had to touch it since. Must have lost the cable in the mean time.

My workshop is still full of grain, should be out week after next so I will be able to get stuck into the roadster properly.

I’d be interested in some pics of the bonnet you took off . Don’t be to quick to condemn it, anything can be repaired it’s mostly labour now if the labour is free

I changed my plugs to NGK resistor style. BPR5ES, I think. I left the box at the hangar.

Anyway, I had my first ever breakdown. You won’t believe this but my British car had an electrical problem. I know, it’s very rare but it happens.

The car started normally and I drove off planning to put a few miles on the old thing. I drove about a half a mile and the engine quit. I noticed that the choke light was off (I had about half choke) and then noticed when I turned the ignition switch on/off, there wasn’t any click click click from the fuel pump.

I started removing the instrument panel screws to have a peek at the fuses just as a very friendly cop pulled up behind me, got out and asked me if he could help (I didn’t realize until I got home and checked the wiring diagram that the fuel pump isn’t fused). I said I’d probably be stuck and would need a tow. He offered to block the cars behind me to protect me. So while he did that, I flipped down the instrument panel and the choke light came on. I fired it up and gave the cop the thumbs up. He made sure the coast was clear for my getaway. Thank you to the Whitpain Township officer that helped me today!!!

So looking at the wiring diagram, there’s a problem somewhere from the
Battery
to
Terminal post
to
Ignition switch
to
Line side of fuse six

I did replace the ignition switch with a new one several months ago. I guess I’ll have to dig back in there and see what’s what.

Oh well, it was a perfect fall day for a drive too.

And I apologize to whomever asked me to take photos of my interior, I completely forgot.

Some progress today between work meetings:

Pulled the engine out of the shed, hooked up to the leveler. Had some help. 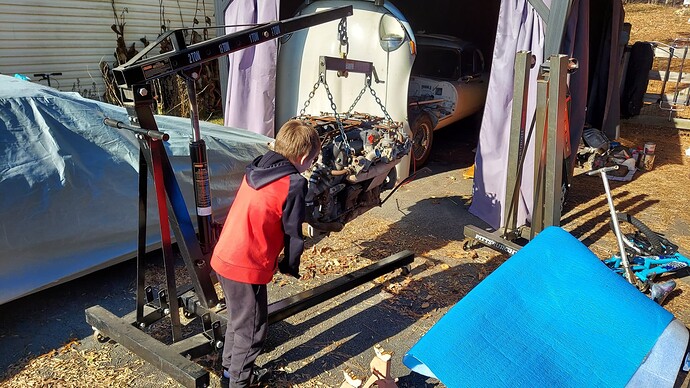 The plan is to cram the drivetrain in on Saturday. 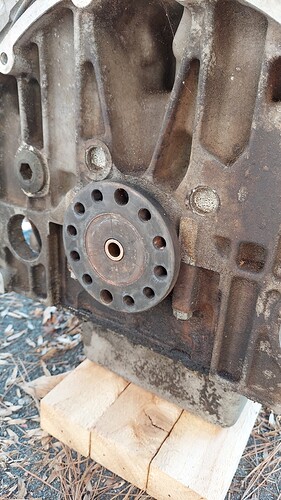 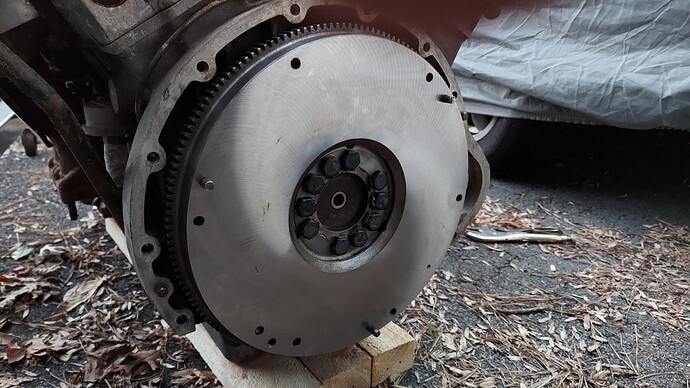 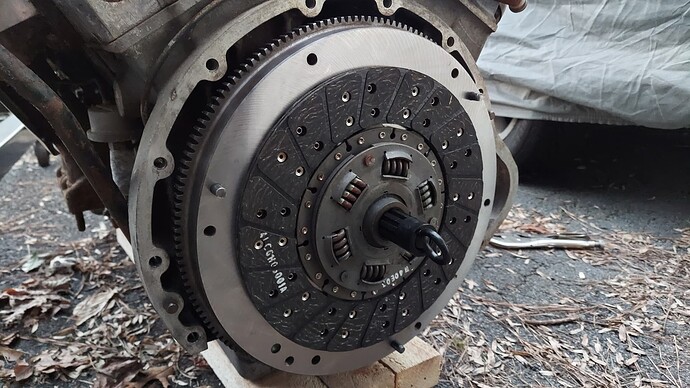 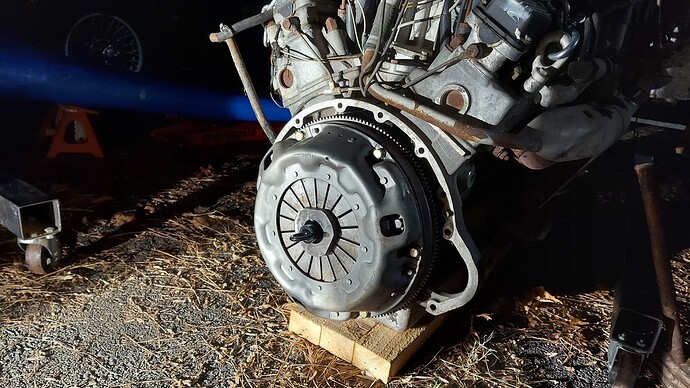 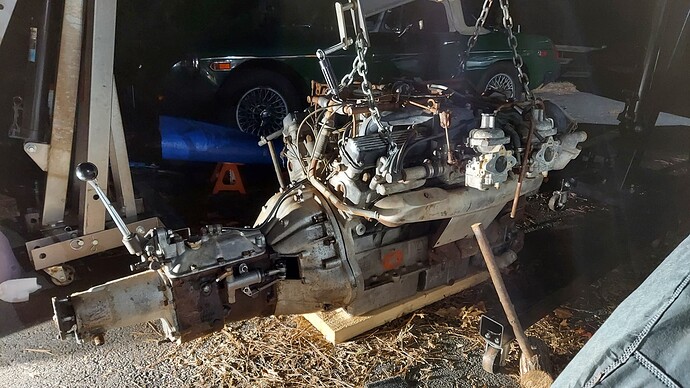 I was looking for fender washers in my boxes today . I know I’ve got them somewhere because I’ve got the other 11 anyway I found another part I’ve been looking for. Only lost it for……so long I don’t remember it’s Xmas
A good day I’m real happy

Jim nothing is ever lost …….just put away carefully

Been there, done that.

You’ll eventually end up with enough parts to build an entire car, when you find them all.

Taking my own advice that i give to younger engineers (RTFM), i read the service manual regarding the evap removal. I was able to get it out of the way and removed the tunnel cover. That was the last piece of puzzle to prep for the motor and trans to go in on the car side. 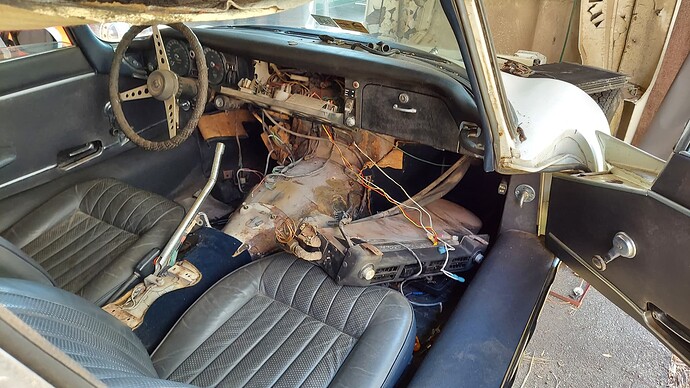 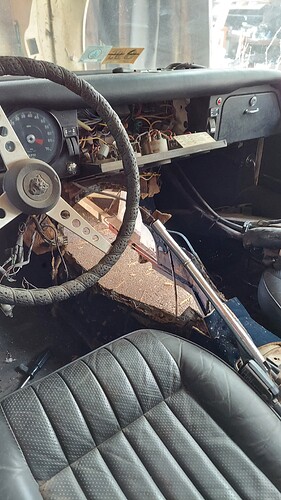 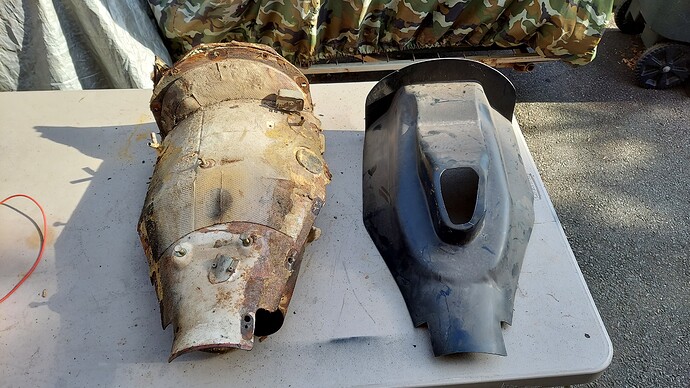 Next up tomorrow will be trying to remove the exhaust manifold studs and install new ones. Then the starter in, new fwd mounts on and GO! 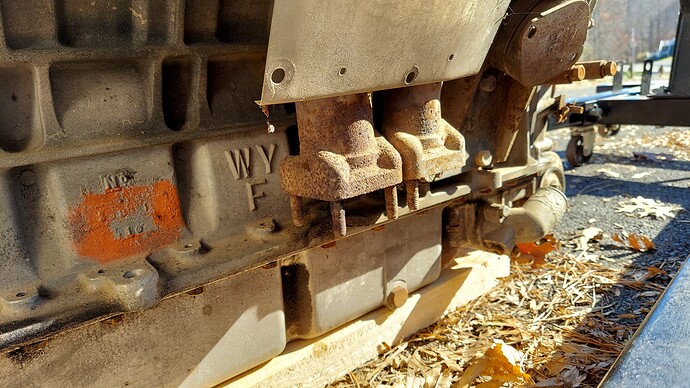 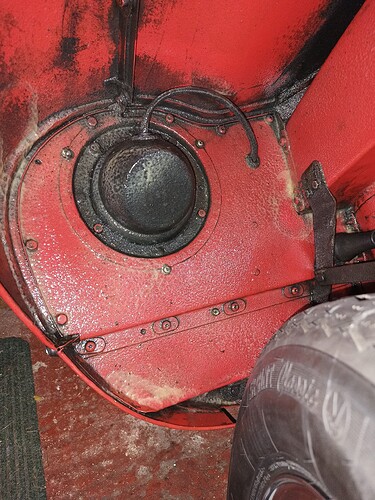 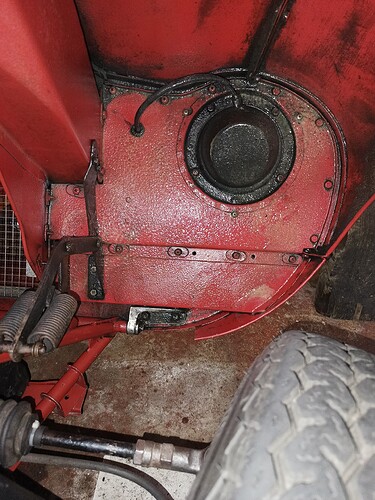 First session of this year’s rust prevention - waxoyl the front wheel arches after cleaning off most of the summer’s grime. While the wheels were off the wheel bearings and front suspension grease nipples were given two pumps each. Despite the cool weather the car still isn’t laid up for the winter. No salt on the roads yet. 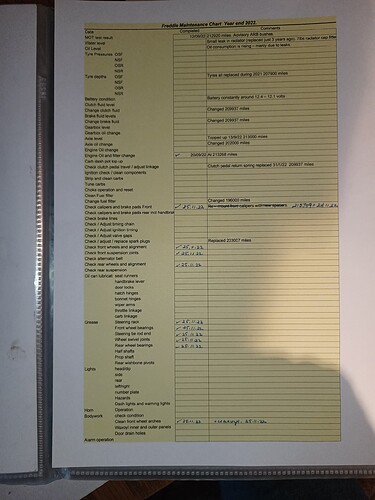 And everything is recorded as it happens.

I like your maintenance spreadsheet! May I ask where you found it (or did you make it up yourself)? Any chance you would send me a copy. I need to get more formal about my maintenance scheduling (memory not what it used to be…hahaha).
Cheers

It is just an excel spreadsheet. It started 20 years ago with about 2/3rds the items but has expanded over the years as I’ve used the car.

Next time I’m on my laptop I’ll see if I can post a copy.

Make that three not two nor twenty

Thanks Chris!! That would be great! A real time saver for us (me) that would have to start from scratch and likely miss some important maintenance items.
Cheers

Took the car cover off the Jeepster, and took it for about a 10 mile run!