What did you do to your saloon today?

I put the clock back, having left all wood panels in place during removal and installation. Quite a fiddle. Took a good hour. Tested it both on the bench and mounted, before doing the final touches. Did not forget the instr light or flex cable adjuster!
I also continued the leather care work, which I find so rewarding. Just wish that the first 2 owners (I am No 3) had done it over the years. It’s a 52,000 mile 4,2 Mk10. 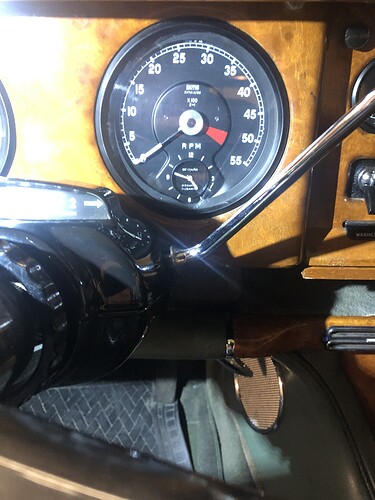 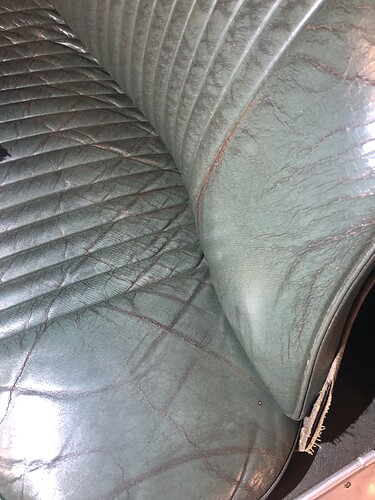 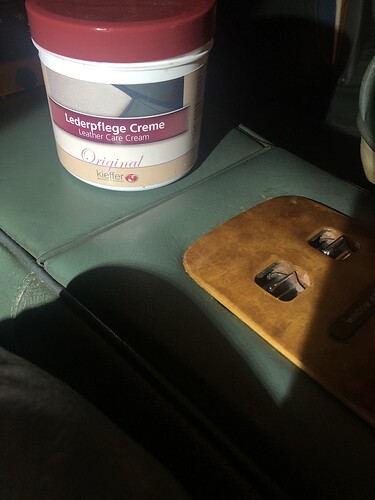 put some oil cleaner in the sump, fired her up for 2 min, let her sit for a couple of hours fired her up again. the dropped the 30 year-old+ oil. and replaced. mercury hit 35 so went an hid in the aircon. another very productive day?

How did that oil look, were there any sparkly bits from metal shavings. I’m sure it was still thick and lumpy with age. And of course the rancid smell. I’ve added a quart or so (liter) of diesel fuel to the crankcase before and the resulting effluent was as dark as coal. Freaked out the mechanic who was watching the oil pressure gauge hovering around zero.

Having fitted the rebuilt head on the mk7 , spent the day swearing at it and stomping around because the effing fuel pumps refused to pump effing fuel !!! Not a new problem , but intermittent . Had all the dash out and checked all connections . Tomorrow , will go under and look at the pumps . But unless they have a common earth , I would have thought one of them would work .

Actually I was surprised. dark grey no lumps no metal. I have used diesel before which works well. but if you have used diesel and if you have any bugs in the oil which can lead to the lumps ( and acid vers white metal) it pays to that her for a long drive after and frequently since the diesel is food for the bacteria.

I drive them like I stole them so no lumps or bumps and bugs would be scared to ride with me!

I started her up for the first time in just over three years. Battery was shot. Barely drove the starter even when just charged. Ended up with an extra battery and my booster starter pack all linked together was enough. Lots of smoke out the back end from the oil I had down the cylinders during storage. Got the garage door open just in time

My son was standing by with the fire extinguisher Took her out for a spin to blow off the cobwebs and warm up the oil properly for draining. No leaks ( yet ). Good to be back! Small finishing touches still to do but very happy man tonight.
Dave

Cool. And what model do you have?

Sorry. Should have put that in. Originally i was trying to load up a video so it would have been obvious☺

Again technically no Saloon, but a MKV, I was supposed to MOT the car last Wednesday, but had some brake issues.

Sooo I finally figured out why the RH rear slave handbrake mechanism was jamming. The shoes had been 180 deg wrong way since 2007! They are MKVIII drums and backplates and slaves installed by an English workshop.

The bad news was that as it was dragging and also limiting the hydraulic action, also the pistons were stuck!

Soooo once I had that all sorted out I needed to bleed the brakes, better also flush and replace all brake fluid, everything else was ok, but of course the LH front slave bleed nipple broke off!

So by the time I had removed that slave, drilled off the nipple screw, found a replacement for it (about three hours of going through boxes of old parts) and refitted everything it was Friday and once I found the source of DPO electrics shorting and blowing the main fuse randomly (steel wire used as a cable tie on the RH torsion bar) It was Saturday and now it does not look like I will be driving to the MOT station any time soon with the old borrowed summer Pirelli Cinturatos?

But now we have light and brakes! 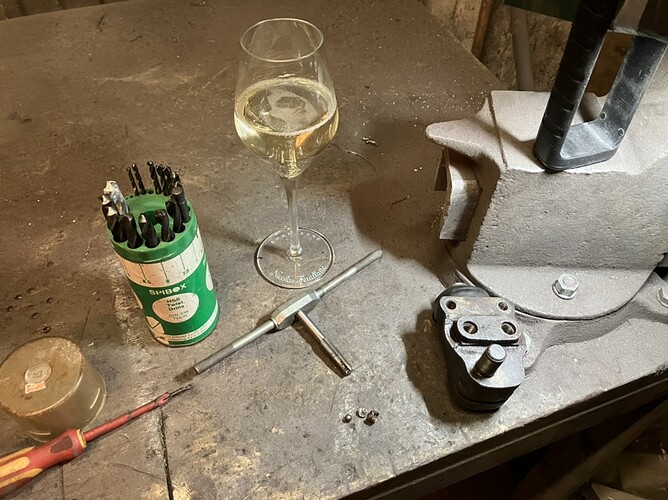 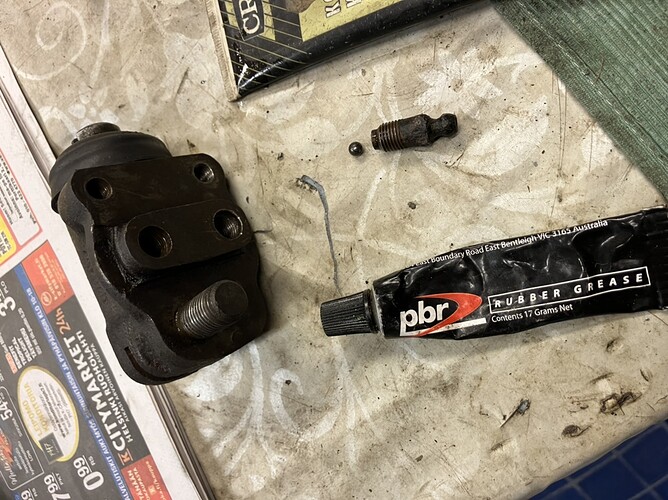 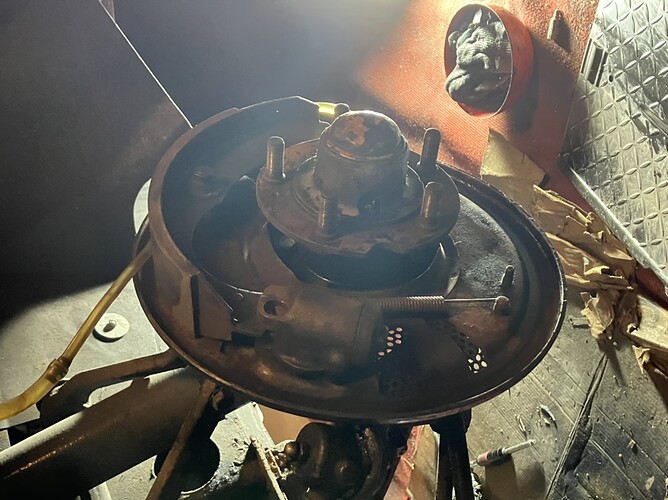 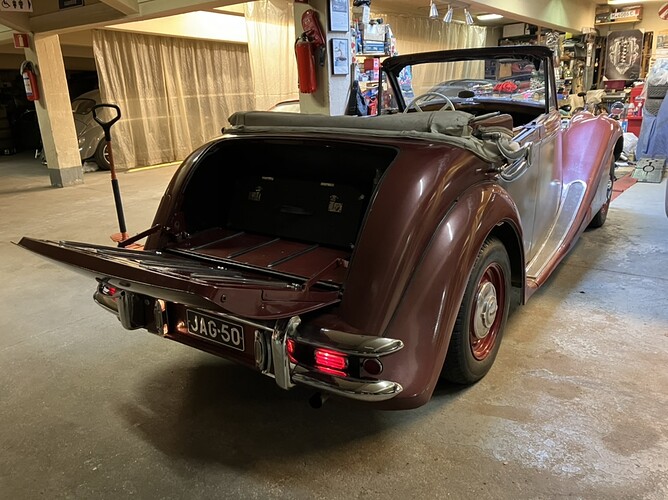 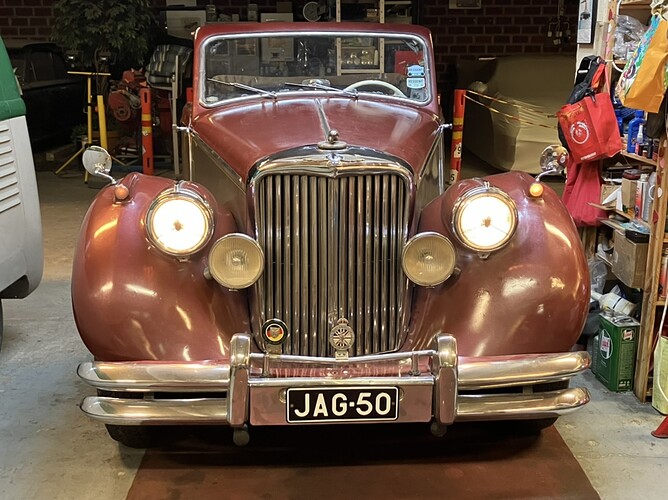 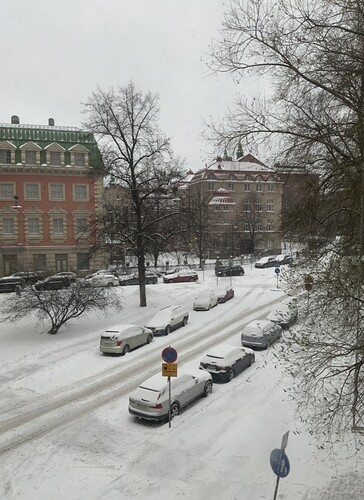 On my MK9 the fuel pump bodies do have a common earth.

More cocktails are required after every jaguar project we undertake. Blood is required to complete the task!

Hey Pekka, in case you were wondering PBR stands for Patons Brake Replacements. I have a more mashed up tube than your one that’s about 40 years old. I expect that it will be amongst my things when I’m despatched.

decided to check and change the power steering filter today. looks like its the one from 65. 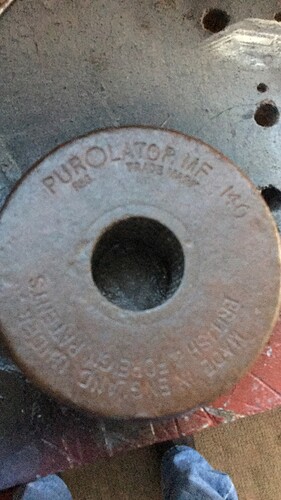 My 1967 Mark 2 had the same Purolator filter. One day several years ago car felt like power steering was ineffective. A specialist ( honest at that) suggested I open the reservoir, remove the filter, and run the engine for just a minute to see if performance improved. If so he suggested replacing the filter. He was correct. Looking at my original Mark 2 maintenance chart, I noticed it did call for replacement of that filter every 18000 miles. Several days later replacement filter courtesy SNG arrived, and the problem was solved.

I put a big electric fan on the rad and removed the engine driven one. Switches with an adjustable controller. Even though it doesn’t really get very cold here in the winter my Mk2 tends to overcool - indicates 50C or less on long cruises. The thermostat works as it should so I thought I would try a new fan. The car never overheats - has a new aluminium rad. 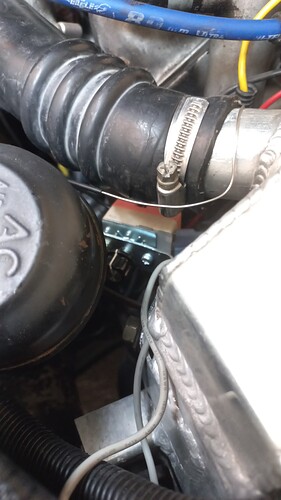 My S1 Sov failed its WoF ( MoT) with inner rear UJs. I could find no play either in the car or on the bench, but, as they say, resistance is futile, so I replaced them; not the worst job in the world, and it gave me a chance to clean up the 50 years worth of crap that had built up on the components. Inner arches cleaned up nicely, not the slightest sign of rust. 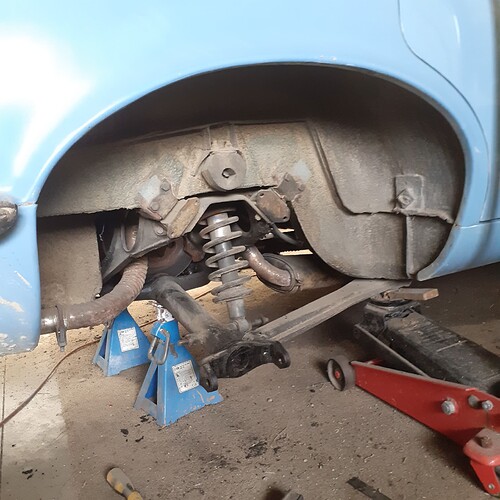 20221128_14480411920×1920 240 KB
Came up like this after cleaning with just water and an old dishbrush.
Interestingly ( or not) there are 2 areas on both sides where there is original blue paint but no underseal, in the region of the Metalastic mounts. It seems like the shell was painted first and then undersealed, presumably the areas where there is paint but no underseal may have been where a transport dolly may have mounted.
Wiggles (Paul Wigton) November 29, 2022, 1:07pm #18

From whom did you borrow tires???

Well, my fellow club member restored a 1955 XK140 FHC and changed it from steel wheels to chromed wire wheels. So he had the five disc wheels with the said Pirellis in a pile at his garage and no need for them but did not want to sell them either so I asked if I could use them. He said ok. I will return them one my car ’s original wheels have been repainted and have new tires in the near future.

My S1 Sov failed its WoF ( MoT) with inner rear UJs. I could find no play either in the car or on the bench, but, as they say, resistance is futile,

Regulations are apparently very strict in your area, in Oregon USA there is no vehicle inspection program and police have been instructed not to stop cars with non functional lights. Was determined to be discriminatory, using a word that begins with r. I wonder if that is the case in other states.