Welcome to the forum!

The “biggy” is obviously the engine: straight six versus V8.

The XJ8 has a less “clunky” and smoother interior styling (they ditched what had been the XJ40 interior), CATS suspension. That’s my 2 cents.

Whatever you plump for, be sure to add its details to your profile “signature”. That way, we’ll always know - and you won’t need to re-type - which model you’re enquiring about.

a 2004 will be aluminium. model known as x350. They look bigger.
The outer headlights are larger
Air suspension

Thanks for the reply, AndyK. Now I know that I own an x350 series. I’m new at this Jag nomenclature, so I’m sure I’ll have more questions. Are there any known problems with the 2004 Jag? It has 140k miles but has had good service records from new. We’re the second owners.

I never owned a X350, but from memory the only issue that stuck out was looking for corrosion of the lower panels (yes, even though it’s aluminum) marring the paintwork. As long as there are no computer error codes then it won’t suffer the most annoying problems shared by other members of the V8 powered Jaguar family.

The XJ40 was the first edition of the new XJ6 platform in the mid 80’s. Under Ford it was updated to the X300 model with more traditional styling and revised six cylinder engine. The X308 was an updated X300 with the new Jaguar V8 and a restyled interior. The X350 was an all-new aluminum platform, which was light enough to once again have a V6 engine installed (bringing back the XJ6 name) though I don’t know if they sold those in North America.

For more on the models just read here: The Jaguar XJ is a series of full-size luxury cars produced by British automobile manufacturer Jaguar Cars (becoming Jaguar Land Rover in 2013) from 1968 to 2019. It was produced across five basic platform generations (debuting in 1968, 1986, 1994, 2003 and 2009) with various updated derivatives of each. From 1970 it was Jaguar's flagship four door model. The original model was the last Jaguar saloon to have had the input of Sir William Lyons, the company's founder, and the model has been feat...

Maybe of interest.
It’s a diesel, so engine stuff won’t be relevant.

It’s a facelift of yours, so bumpers boxier. 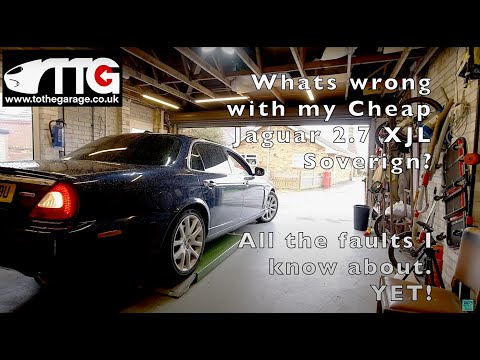 Hopefully yours will be better!

Dave, thank you for the info and for the reply. You made our day! The article answers all of our questions concerning the different model designations. Again, thanks so much. Have a great day.

Hey, AndyK, thanks for this video, it will help me in my initial inspection when our Jag arrives. You’ve been a big help, and we do appreciate it!