What is this stuff on underside boot lid?

Never noticed this stuff before but caught my eye the other day on my 1995 XJS coupe. Looks like a uniform bead of something along the underside of boot lid at the top edge (closest to rear window). Appears to fit outside of the boot rubber seal…between the seal and the window. Now it is cracked in numerous places and a couple of chunks missing.

I can only guess as to whether it is “factory”, guess as to purpose (maybe ensure water doesn’t build up sufficiently to overflow the seal?), or to provide a “seal” over the metal seam of the parts of the boot lid?

Looks grayish and is hardened. Makes me think of Bondo. Very uniform in shape so if someone added it later in this car’s life, they were skilled.

Anyone (partcularly facelifts) have the same or have any knowledge of what ? 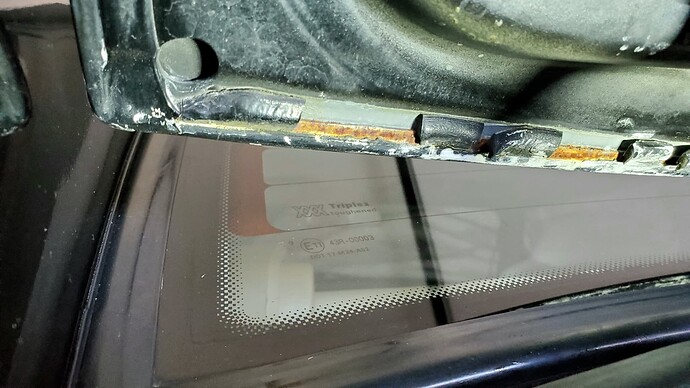 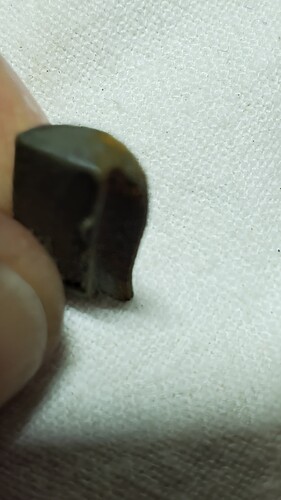 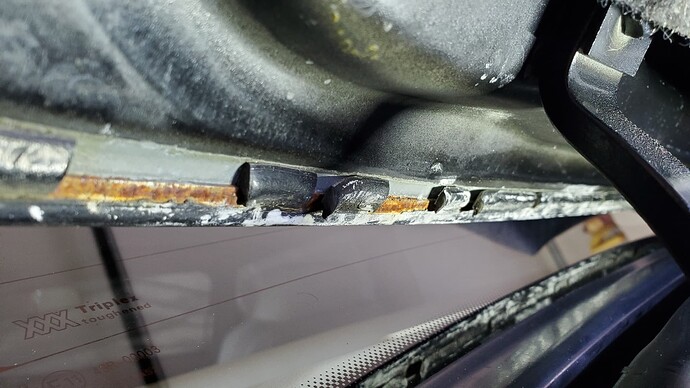 I’ll check Superblue to see if she has any of that stuff on her. I’m guessing from the look in those pics it may very well be factory. Although that rust underneath it would have me very worried …

Don’t know if this is related, but, IIRC, the factory workshop literature mentions when installing a new boot seal that the (butt) ends should be centered in that particular area of the boot opening, opposite that edge of the lid. Always made me nervous about water, rain, etc. getting into the boot through that “gap” in the butt ends, which we know from our sunroof seals is never and can never be truly watertight (hence the drains located there). I guess though positioning the gap at the top makes it less likely, vs. being in the center of the bottom of the opening, in that water likely runs down the seal to “terminate” at that point of the opening.

Looks like the urethane seam sealer that seals the hem of the outer panel to the inner- the rust has caused it to break off. Pull the deck lid, clean off the caulk, neutralize the rust with a conversion prep and coat it with POR15. Let it dry, recaulk with automotive seam sealer, and paint it.

Thanks Robert! I knew someone on here would know

Robert, when you say “conversion prep” I don’t exactly follow you. Unless you mean something along the line of the POR 15 Metal Prep ?

From looking at their website, it seems that the stop rust kit for small projects would be just what I need. Cleaner/degreaser, then a little metal prep along the seam area being careful to keep it all to the underside of the boot lid, and then the rust preventive paint. Last step would be to use some POR 15 seam sealer in black.
Would that be a reasonable approach?

Heck, if I was really careful and lucky, that black sealer might work to cover the area worked without a re-spray to the boot lid.

Yes, metal prep. You want to clean and etch the metal. Usually best to use all the products from the same manufacturer, and POR products are very good (but $$$).
If you carefully mask the outside, you can probably spot a little body color once all the POR has cured.

Thanks. Sounds like a worthy approach.
The paint on the car is getting a bit tired
… i think i will check into the cost for a paint job. If out of reach at the moment i can do the POR 15 job to the boot lid and get by for a while.

Never heard of it before … Why not just spray it with that black “rust converter” stuff that Rustoleum makes? I’ve always used it and always had good results.

Alternatively, if there are no actual holes made in the metal I just use the rust remover gel stuff and re-primer (w. a rust resistant one) and paint over it.

I’ve never used POR. But heard good things about it on here. Greg used it a lot doing his subframe

POR is top quality, but only buy as much as you will use- it doesn’t keep once opened. Much better than Rustoleum; have used both a lot.

POR= Paint Over Rust. (Plus twenty.)