What Parts would be useful for XK owners from a wrecked MKVII?

I have advertised them and some MKVII owners want some parts, but I wonder what parts I should get off them for storage that may be saleable to XK owners ?

I hate throwing away useful Jag parts, but thats what is going to happen in a few weeks, so I am taking parts off that I can

I have saved all the original Cheney and Tex hose clamps of course, lights, horns, instruments, electrical components

Engine, gearbox, diffs, steering etc will probably have to go with the car, as they are being taken away on a tilt tray, so have to be “rollers”

I understand the axles and rear hubs will fit the classic XK.
Just based on my old MK10, if the doors are not rusted in the bottoms or along the tops at the windows, someone eventually would want them, along with the glass and regulators.

I wish you were in the UK .

You could remove and save, the brake drums and adjusting mechanisms, then put the wheels back on so the car will still roll.
You could save the carburetors, hub caps, radiator cap,horns,windscreen wipers and washer nozzles on the scuttle, ashtrays, spare wheel, front door interior window winder handles, which are all pretty much the same as some XK140s.
Hopefully the engine and trans could be removed and the car will still roll. Hopefully some of the old used interior moquette, rexine, leather, wood etc pieces would have some value ?
The side lamp and turn signal lamps, and the tail light lens, are the same as 140s. The MkVII headlamp chromes are similar to those on 140s.

Don’t forget to look for lost tools which may have fallen down inside the bottoms of the front doors.

The entire MkVII front seat will stand up by itself (the rear seat will not) and makes a very comfortable chesterfield in your garage. 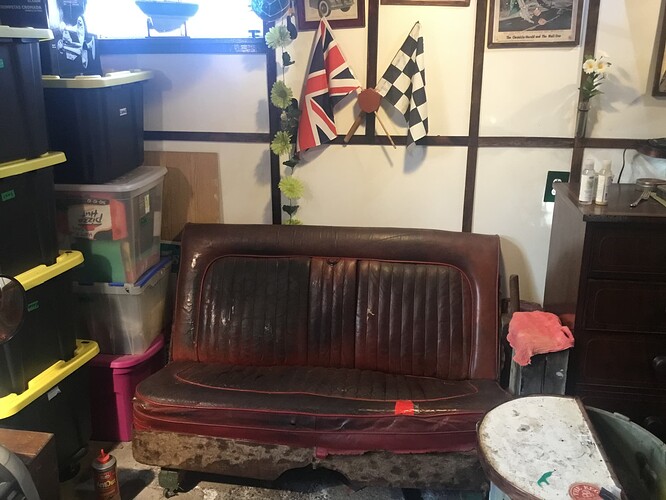 Clutch throw-out bearing lever would be useful as these are a weak spot on '120s and reproductions have been problematic. Probably not worth the effort just for that though.

The engines are mostly the same as the equivalent years XK120 and 140.
The '51 will have the SH or JH gearbox, same as early XK120.
The '55 gearbox will be JL or JLN with no rear mount, but would be useful for XK140.
The rear axle is too wide for an XK, but some internal parts are the same.
The wheels, brake drums and hubs are the same as disc wheel 120s.
The window cranks and lift channels could be modified for use in a FHC/DHC.
I would save the glass and window frames.
I would save all the chrome parts, door latches, brake shoes, cylinders and hand brake parts, and fuel pumps, tanks and fuel pipes.
Even the little clips that hold the fuel and brake pipes to the chassis are the same as 120 and pricey; they are removed by twisting.
A C-Type replica builder would want the ID plates and registration titles.
Strip them down to bare body and chassis if you can, though I realize that’s a lot of work, and you may not have storage space.
A tilt tray hauler can load non-roller cars, without wheels, they bring their own. They do it all the time with traffic accidents.

If I recall correctly, Mk VII & VIII had different brakes (twin trailing shoes, rather than leading shoes, because they had a servo, and the trailing shoe design was less likely to fade, but needed more pressure - it was a heavy car, after all. The drums themselves may well have been the same, though. Without the MK VII parts book I’m unable to check this.

You’re right, the Mark VII brake system is Girling where the XK system is Lockheed, but still the servo, cylinders, springs and shoes are no longer made and some Mark VII owner may be glad to get them.

Horn and turn signal manettes.
How about any red bolts on the front suspension, they would be the same as the XKs, and the interest in them may grow.
Really all bolts, since ANF/UNF threads seem to be hard to find in most countries now.

Thanks for all the good suggestions, I was aware of a fair few of them

Are the brake wheel cylinders worth taking ? or are they easy to get replaced ?

The other engine, I replaced the cylinder head many years ago with another, and shimmed a couple of camshaft caps & bearings, so I wouldnt sell that to someone (but it did work for years, probably still does !

keep the suggestions coming by all means

under cover storage space is the issue, its hard to keep things ok unless well stored

There is also the consideration of, "am I willing to do all this disassembly work? "

Wheel cylinders for Mark VII are no longer made.

There is also the consideration of, "am I willing to do all this disassembly work? "

Yes, that is definitely a consideration, as I pointed out to a few potential parts buyers who want to lowball offer you, but I have to pull the parts out. I remember one day struggling to knock rusty old cotter pins out of the rear driveshaft, mosquitoes biting the f&*k out of me, and I think the old guy had haggled me down to $70, spent an hour wrapping it to post, and it looked like a damm bazooka

Wheel cylinders for Mark VII are no longer made.

Probably worth grabbing them then, I remember on another one the bleeders were seized and broke off. Might make moving them easier to as the y have been sitting for ages

Will grab the clutch and brake bottle, someone told me the glass brake bottle is same as Bentleys

I forgot about the glass brake fluid reservoir, and if there is a clutch one that is a double bonus, as that glass jar is used on early XK120.
If there is a Girling tag on it, that is used on Mark V.
The brass hose clamps with them are also desirable by 120 and Mark V owners.

The entire MkVII front seat will stand up by itself (the rear seat will not) and makes a very comfortable chesterfield in your garage.

I sold a beautiful red front bench seat to the same older gent I sold the driveshaft too, it was perfect with re-finished wood, think it was out of a MK8.

He rang me up, and actually wept over the phone about how good it was

When I told him I had a recon radiator, he was super keen for that, but I said no, I am installing that in my car, told hime he could have the one out of that which seemed fine, except for a tiny bit of corrosion on the end of the stub pipe, he kept haggling & carrying on, I eventually said he could have it for $50, AND if he wasnt happy, I would refund the purchase cost, but NOT the freight, which was also $50, he declined…silly old codger, this is the sort of thing you have to put up with

I have several oil/water senders…are they the same for XK ?

I tested 2 today…the perfect looking one did not register water temp, of course the one with a marked face worked fine !..how easy is it to “swap” faces ?

I have an early MK7 engine, sounds like I should not throw away the oil filter,
it has the 5 blade alloy fan, and cam covers minus the front studs

(this engine was rebuilt by the Jag dealer, but on my analysis, they left out a spacer in the water pump, causing it to fail, and the motor seize.

I sold a vital part of this to a Danish XK120 owner some years ago, @Rob_Reilly you gave me some advice on that matter

The oil/water gauge is not the same Smiths number, but what the difference is I do not know, possibly just the method of attaching it to the instrument panel, brackets vs clamps. An XK owner might be glad to get them.

Hub caps aka wheel covers aka nave plates are the same as disc wheel XK120/140.

The early engine is absolutely virtually the same as XK120, only the front mounts, carb needles and distributor mechanical advance are different.
I would like to get the 5 blade water pump myself and see if it can be fixed. Contact me by private message if you want to sell it.

I have received inquiries about the brake parts, but they have different part numbers between the MK7 and XK120

I think we have established the shoes are not the same, but I wonder if the drums and in particular wheel cylinders may fit ?

I do also have 2 x MK7 rim embellishers, would they fit an XK ?

It is me that enquired about the brake parts, if you recall I have mark v brakes fitted to my early 660365 XK120. Would the Mark VII brakes be correct?

Not wanting to cross post tooo much, but it seems some of these mirrors are NOT for Saloons, I know there is a lot of knowledge on the XK forum.

(The MK7 mirror is spoken for) 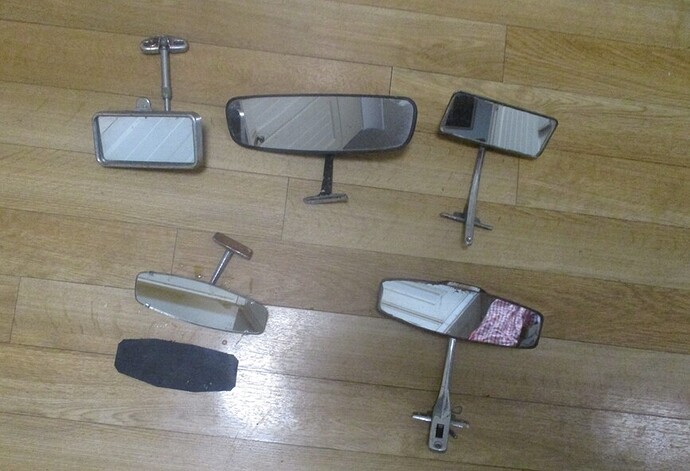 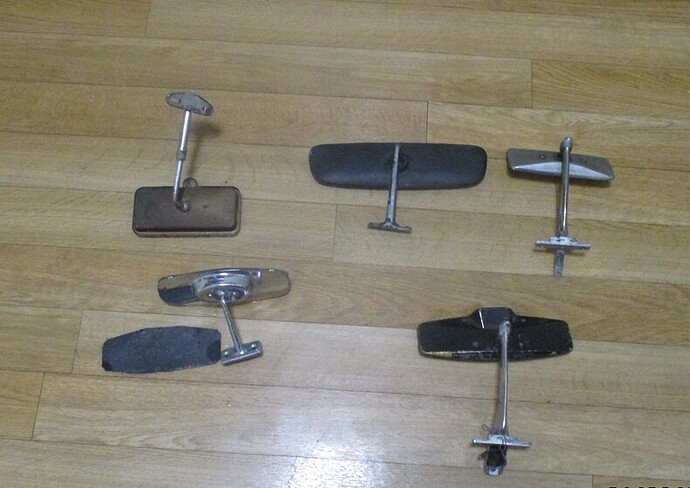 sorry, no matter what I do these pics will not upload

here is the thread with pictures in the Saloon forum