What thermostat for a rebuilt engine

Is it best to fit a new 70degree stat , or would an 86 degree one give better efficiency to the engine , or would it be considered to run a rebuilt engine too hot

Given your cars seem to be older and expecting this engine is for same, I think you would use a 74 degree thermo. My cars this age use this thermo.

What intake manifold? Early cars were designed for bellows thermostat, mid-60’s car used a wax thermostat with a bypass sleeve, NLA. And later cars used a dual poppet thermostat. Not interchangeable. As for temperature, anything below 70 will increase wear, above 85 increases efficiency. That’s your tradeoff. If the compression is more than 8:1, I’d suggest a 75C or something in that neighborhood.

If the engine has an electric fan with an on/off otter switch, then you need to think of the thermostat in relation to the operating temperature of the fan. So if you have an 85c otter, you sure don’t want an 86C thermostat.

The MKX has a mechanical fan, I had a 74 deg thermostat in my ex 1966 E-type 2+2 for 16 years, worked well for me in all conditions and would not run the electric fan unnecessarily.

But as you have no otter switch and electric fan you could go a bit higher. Are there 76 deg or 81 deg thermostats? I think the V12 has 84 or 86 deg, but the cooling system is completely different.

Could you post a photo of the manifold? It may have the same thermostat arrangement as an E-Type S1 4.2.

Is this the engine? 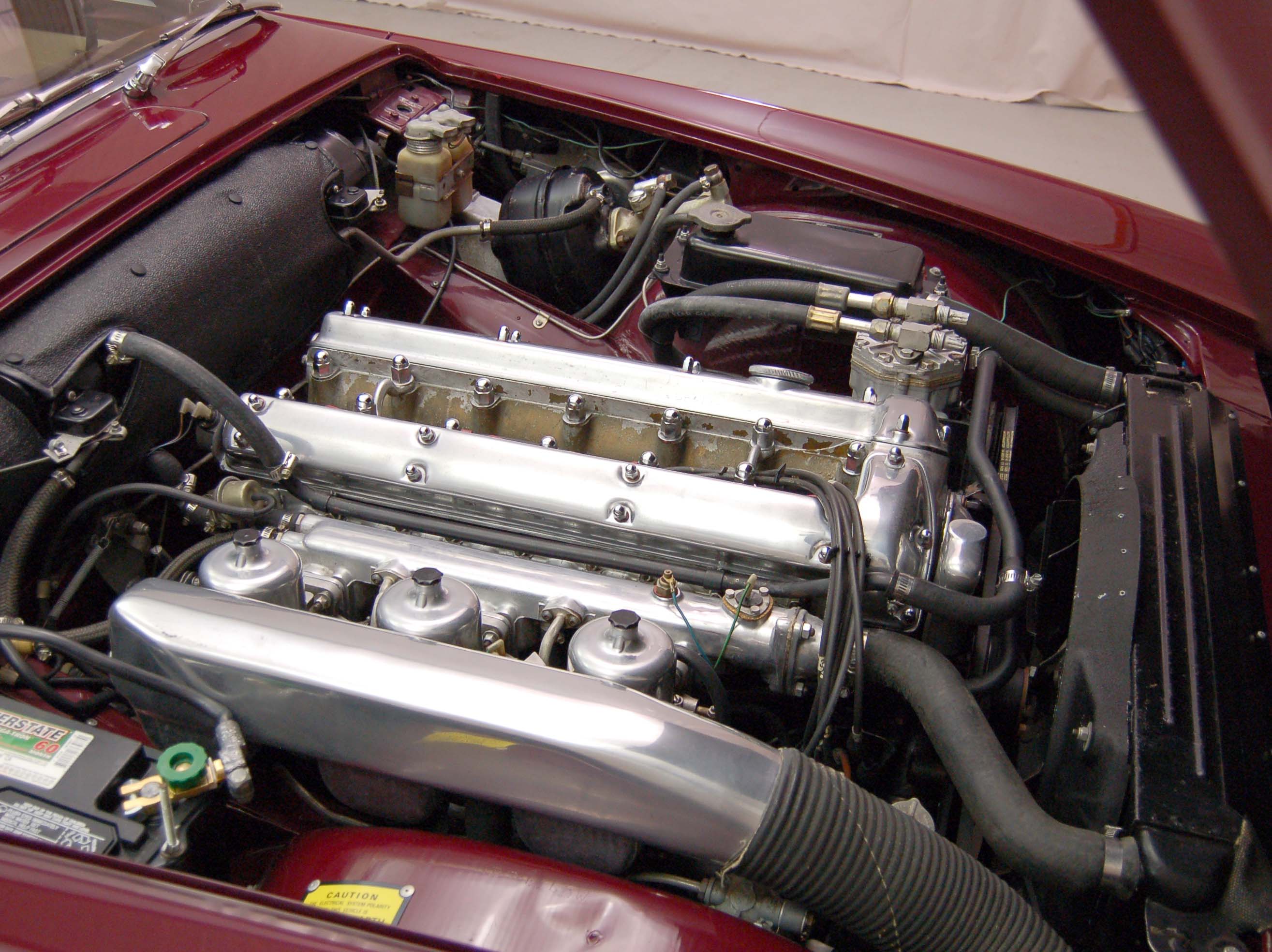 If so, this will use the same thermostat as an S1 4.2 E-Type, and it’s unobtainable. The closest modern thermostat is SNG Barrett 3766/1, which opens around 75… The problem is that this engine uses a unique bypass arrangement, which was never copied by any other manufacturer, so nothing modern can substitute. You can refer to my write up on this version here:

Discussion of the Series 1 4.2 E-Type Thermostat

Hasn’t Moss produced a copy of the original? Thought it went for about $100.00 USD.

No. They may sell the SNG thermostat, which is a cut-down Land Rover design. It doesn’t close the bypass well, and it’s only available in one temperature range. Moss makes a knockout reproduction of the Smith’s bellows thermostat, also in 74C. But not only is it incompatible with the higher pressures used in later cars, there simply isn’t room in the manifold for it.

This is my engine , manifold looks a lot like yours , but what is that gizmo on the far side next to the radiator filler tank ? 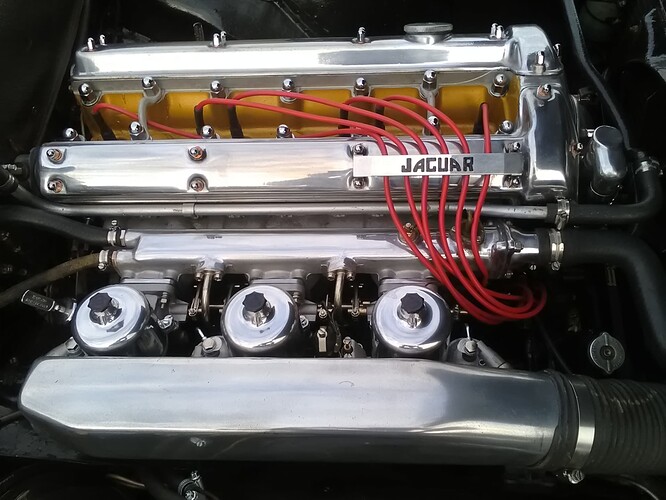 This is my engine , manifold looks a lot like yours , but what is that gizmo on the far side next to the radiator filler tank ?

The problem is that this engine uses a unique bypass arrangement, which was never copied by any other manufacturer, so nothing modern can substitute.

…and I remained grateful that because of that unobtainability, Tweety’s OE 'stat worked perfectly.

The SNG thermostat would be the closest in operation to the original. Or you could use the manifold extension from an S2 E-Type and a double poppet thermostat, but that would be a visible change to the engine. The advantages would be a bypass that actually works and a wider choice of temperature ranges. 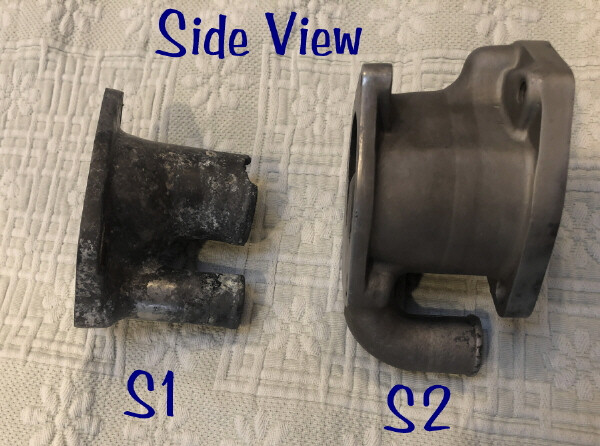 This discussion prompts me to ask if I have completely misunderstood the basic purpose of the thermostat and thus have been making a mistake.

I thought these devices were primarily used to help start a cold engine in cold weather… As I live in San Diego where it is never cold but sometimes hot, I have simply removed the thermostats in several old cars including two with xk6 engines.

My thought was I didnt need the thrrmostat to start in the cold and it reduces water flow and thus cooling capacity in hot weather.

But now I rrad that a pupose is to keep the engine temperature in an optimum opetating range.

Is this really true and important and have I.been making mistakes for a long time???

Is this really true and important and have I.been making mistakes for a long time???

Yes it is, and yes you have, enjoying the club, because over the years, I found many, many people who misunderstand the purpose of thermostats.

Paul, I think you have tried to capture too many separate thoughts in one comlex sentences. Would you please disagregate it and expound on my.many errors. Phillip

I will leave that response to Mike Frank, who has a supremely good grasp on this whole subject, and who can respond to it better than I.

Is this really true and important

There are a few functions a thermostat performs.

It isolates prevents coolant from circulating through the radiator until the coolant reaches a specific temperature determined by the manufacturer. This allows for a faster warmup which reduces emissions and because the mixture is enriched for less time fuel economy is improved.

Once the engine is at operating temperature the thermostat keeps it there or within a fairly narrow optimum operating range by regulating the flow of coolant.

It actually doesn’t maintain temperature in a range. It’s purpose is to establish a MINIMUM temperature. Above that minimum, the thermostat provides no upper limit. l The reason this is important is that there’s a relationship between temperature and friction. Too cold and you get more wear. 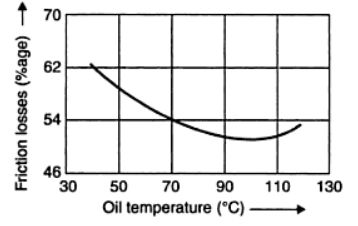 Another desirable objective is to keep a relatively constant flow of coolant circulating around the heads at all times. This is the function of the bypass system, and it only works if there’s a well matched thermostat installed.