‘Dunlop “Wire Spoke Wheels”, as were fitted to Special Equipment models, were painted to match body colour. With the introduction of 60-spoke wire wheels for XK150, these were progressively more usually supplied painted Silver, rather than matching Body Colour. Chromium Plated “Wire Spoke Wheels” were available to Special Order only, but were very rarely supplied.’

So… all 140SEs were fitted as standard with 54-spoke wires, painted body colour, unless chrome was ‘special ordered’, which happened very rarely? Interesting. My car was on a set of very old and tatty chrome wires, including spare, when it came back from the US. It had been stored since '82 so I’ll bet they’re original. As I’m going to do a colour change, I was thinking of painted wheels to match the trim colour (which is management’s preference too, so it’ll probably happen). Every restored 140SE I’ve seen has been on chrome wires, but it seems that would have been very rare when new. It’s a bit annoying (assuming I’ve got this right) - I’d like to fit painted wheels, whereas my car may be one of the “very rare” ones supplied new with chrome!
Thoughts welcome!

The standard wheels on all (standard) XK140 (no prefix to chassis number) were disc wheels painted body color with chromium hub caps.

Chromium plated 54 spoke wheels were an extra cost, specifically ordered optional extra, and during 1954 to 1957 period very very rarely ordered, albeit no known factory data that quantifies just how many/few were ordered.

But yes, these days with restorations, you get many ‘standard XK140’ that have now been modified to have wire wheels fitted, and more often than not, they are also chrome plated. And many restored XK140M and XK140 MC originally fitted with body coloured painted 54 spoke wheels now fitted with chrome plated 60 spoke wire wheels, as 54 spoke chromium wire wheels are not readily available.

So yes, chromium plated 54 spoke wire wheels are extremely rare, and even rarer originally fitted to a new XK140M or XK140MC

Thanks Roger, that’s what I thought - but nice to have it confirmed.

It poses a problem - I’m 99% certain that the rusted chrome wheels the car was sitting on are the originals. If only I had the original order from Hoffman…

Given that I am changing the colour of the car, and converting to RHD (although leaving the LHD elements in place), I’ll go with painted 60 spokes, either body colour or trim colour. The chrome wheels would probably cost a fortune to get replated, and I’m not a fan of chrome wires anyway, too much bling in my opinion. I’ll make sure the old set get stored carefully and stay with the car.

I should stop getting sidetracked like this and get on with the welding. Thanks for the confirmation!

If they are 54 spoke chrome wires, it is highly probable that they are factory original, or at least period new spare wheels from Jaguar dealership. If the centre hub is in good condition as in spline not worn, they are probably restorable with new chrome spokes and re chromed rim.

But personal choice, I have to agree. I far far prefer body colour painted wire wheels on an XK140 despite the restored car preference for chrome, albeit if 60 spoke they are not authentic for Concours rules

when it came back from the US

Just another aspect; in the old days there were chrome shops in every city and large town here, and without regulations it was reasonably low in cost, so it is possible they were chromed by the local Jaguar dealer for more showroom bling, or by the first or second owner.

It’s actually very good quality chrome as you might expect from the fifties. On most of them, I could almost get away with a thorough but careful polish and use as-is. Bummer, though - just inspected them thoroughly and found that one of them is black. That made me think that the black might be the spare, the first owner (there’s only been one prior to storage in '82) might have had the four on the car chromed but not bothered with the spare. That said, if that were the case the spare would have been black, whilst the car was Carmen (Carmine?) Red…

My 140 “SE” came with disc wheels…maybe a special order?..Ed West was a well-informed Jag enthusiast here in So Cal (he had an alloy 120) and he told me the SE did not guarantee wire wheels would be standard, FWIW.

as 54 spoke chromium wire wheels are not readily available.

54-spoke 16x5 chrome plated Dayton wire wheels (D445) are available from many distributors in the US. My XK140MC (US terminology) has chromed 16x5 54 spoke wire wheels which are at least 20 years old, but I don’t know whether they are original. If there are any distinguishing marks that would help me tell this, I would be interested. However, my main point is that 54-spoke 16x5 wires are “readily available”, and have been for as long as I’ve had my car.

You’re right - $485 each (gulp).
I’m surprised MWS don’t make this spec, given that 120s and 140s all had 54-spoke wheels. All down to Dunlop India, I suppose…
All the evidence (circumstantial, granted) points to my car having had chrome wires when new, but it will be getting painted wires in its second life.

my XK120 660851 was the first XK in Australia to have CWW and these were fitted by the 28th sept 1952 the car had disc wheels originally, having an ENV diff it would have had some sort of hub adaptor.
The first car in Australia and in fact the first car ever (LHD or RHD) to be a special equipment car was S660983 which was built may 1952 despatched 30th sept and arrived in Australia november 1952 BRG with body colour wheels, this car had a 3.77 2HA diff. Interestingly this car did not have the raised boot floor but had been levered up and wooden blocks forced in so the spare wheel fitted. I have also seen the first SE LHD car as well built 2-3 months later, owned by a friend in NY. forgot to check what had been done re boot floor

Thanks for update Joe.
I wasn’t aware that Dayton made 54-spoke 16"x5" wire-wheels, but haven’t really checked, as in Australian Concours circles their 60-spoke 16"x5" chrome wire-wheel is not seen as being authentic for restored XK150, given differences in hub and spokes compared to original, if indeed judge is sufficiently astute/knowledgeable.
Maybe Dayton’s 54-spoke ones are better, albeit I would presume they use same centre-hub and spokes as in their 60 spoke wheels, or maybe they have improved both (been a while since I revisiting their latest/current offerings)

Having said that, not really sure status of MWS ‘Dunlop’ 16" wire-wheels these days, given they no longer make ‘correct’ authentic E-type 15" wire wheels with their added/visible ‘safety’ bead, and very horrible and visible MADE IN INDIA stamping. Causing a little bit of grief here in Australia, as apparently in UK they don’t care, so MWS not prepared to make authentic E-type wheels again.

As you say Lee, maybe your 140 “SE” was a ‘special order’ - there was a very small number of special options, and indeed deletions, especially re the ‘Special Equipment’ package.

My run down on XK140 wheels was an overview of the factory ‘standard’ original situation with XK140 wheels, which is the basis of (most) Concours Rules, and usually does not allow for special orders for an individual car unless adequate evidence is provided.

In Australia, we have a situation where if car is presented for judging with a known ‘anomaly’ from ‘standard’ authenticity, then the onus is on entrant/owner to provide proof, given owner will be aware of that anomaly (as you are) which cannot be expected to be readily known by any/all Judges.

If car is not Concours’d (new word?), owner is free to do whatever he likes of course, but if entered in a Concours, then the RULES of that particular event apply.

Another data point is, my 140 SE also has the steel disc wheels, and also a wheel brace. When I applied for the Heritage Certificate, they confirmed the SE status, but didn’t comment on the wheels.

Apologies if this side-tracks the conversation:

I have a set of wire wheels that came with my 120 OTS. They were stored outside for several years while the car was being restored and of course ended up with quite a few spots of surface rust. A bloke at a car show once told me that chrome wheels can be restored to a shine with minimum labour simply by soaking them for several weeks in molasses.

Before I go and raid the cooking aisle at the local supermarket, can anyone advise if there is any truth to this suggestion?

In order to see whether your rim is original indeed, did you check the Dunlop code on the rim (tyre and tube removed)? It should read: DRC 5K 16 followed by a two letter code and Made in England. Some wheels also have the letter W at the end of the code.
DRC stands for "Dunlop Rim (& Tyre) Company. The rim dimensions are clear I guess and the two letter code is (most likely) a production date code (which I still have to decipher).
I’ve attached three photos with different production date codes for comparison. 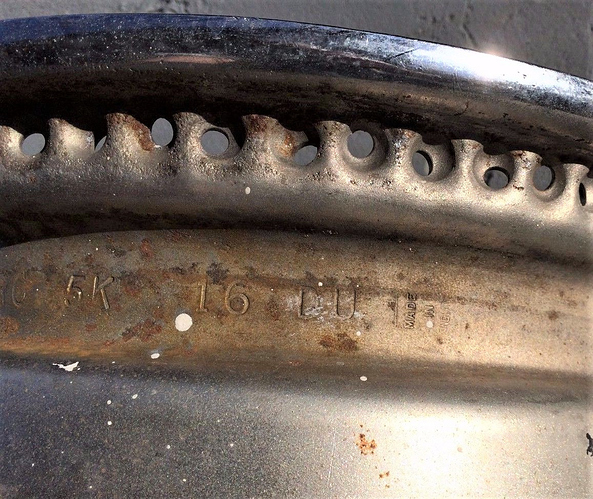 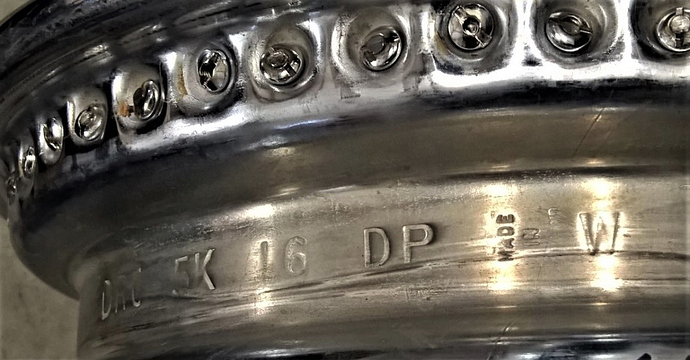 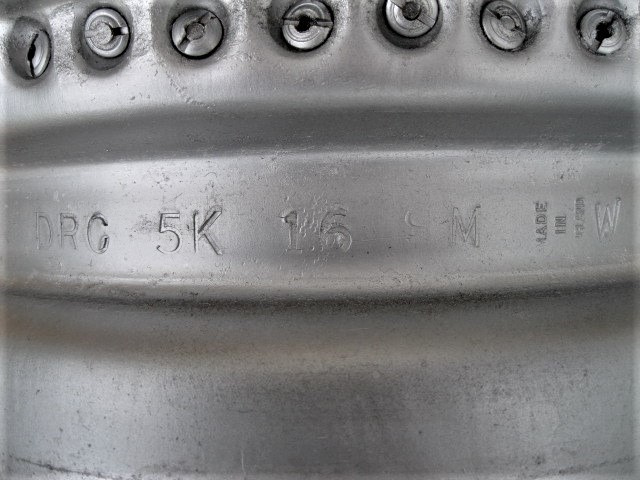 Thanks Bob,
That’s really useful and just the sort of info I was looking for. Obviously it doesn’t rule out the first owner fitting a set of original wheels from another source (although the date code would be really interesting), and given that the car was stored in 1982 and the wheels are very ‘tired’ I doubt they would be from any aftermarket manufacturer. Understanding the date code would really help!
I can’t check them at the moment as they all have very hard old crossply whitewall tyres (probably tires, come to think of it) fitted. I need to get one to a tyre depot to have the tyre removed so I can check, and to help with storage anyway. Although they have a certain period charm with these wide band whitewalls on them…

Just out of interest did any other British car have 16" X 54 spoke wheels? I have three NOS centres so am wonder what else they may fit.