Yes. My 1970 Series II FHC has the disc wheels. They don’t seem very common - it definitely stands out at shows. There was also a guy I was friends with who had a ‘69 FHC with disc wheels around here a few years ago

Ok, I saw you deleted that post. The same wheel as found on XJ6 (and for XJ6 the standard was silver painted wheel with a chromed rimbellisher and chromed hub cap, chromed disc wheels was an optional extra for an XJ6) was available as optional extra under the marketing title “turbo disc” wheels and they were chrome plated with the hub cap on an E-type would have black paint and the E-type growler logo with black and white chequered flag background.

According to Clausager (Factory Original E-type book) it was available as optional extra from 1968, home market cost in October 1968 was £24 GBP, no idea how much they cost at the time in the USA, but it was reportedly a relatively rare option. For Series 3 the standard (just take a look at the factory brochures and photos) was the steel disc wheels and CWW was optional, but a very popular option. I think more Series 3 cars, especially in the US had chromed wire wheels than disc wheels. I would have preferred my V12 OTS with disc wheels, but #1S20183 was built and delivered to Belgium with CWW’s.

I’ve thought the disc wheels were quite attractive on E Types.

I’ve never been a big fan of wire wheels. I’d be happy with disc wheels too on Series 2. My car needed new wheels for so I ordered the 6"x15" D type disc wheels from Realm Engineering in the UK. They should get here in a few weeks. They’re a bit pricey so I only ordered four. One of the old 5"x15" wire wheels will be kept for a spare.
https://realmengineering.com/d-style-wheels/

I came within a hair of ordering knockoff Panasports for Tweety.

Those are cheaper than the other Dunlop styles I’ve seen around. I’m a huge wire wheel fan, but was thinking of getting a set of these for when I eventually track the car.

I’m not sure but I think the regular Jag suppliers are reselling the Realm wheels. Even with shipping from the UK, I saved quite a bit going through Realm.

I wanted to get the open three-eared knock off too but they won’t work on my car. Right now, I’ll just use the original wrench offs. I may just get an old set of beat up two eared knock offs so I don’t have to worry about damaging them with a hammer and won’t need to carry one of those wooden forms for the knock offs.

A 5-pound lead hammer will not damage even the most pristine knockoff.

We beat the heck out of the two and three eared knock offs on MG’s and Sunbeam we had when I was a kid. I’m almost positive we used a copper mallet not lead.

I’m almost positive we used a copper mallet not lead.

Yep: copper mallets will eff them up. Lead?

I bought the hammer of god for mine… great in the garage. Trunk? Not so much. 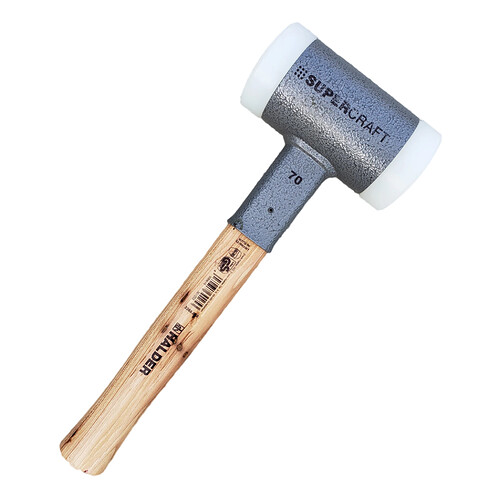 I think disc wheels look great but as was mentioned, quite expensive!

They’re not too much more than the same size chrome wire wheels with stainless spokes. They’re less than the all stainless wire wheels.

My series II came with the chrome turbo wheels, a $76.00 option in 1970. On the plus side they are 6" wide and believe the off-set of wheel is different than wires, making a slightly wider track width. I have added wheel spacers of .20" to make wider yet.
Glenn

My wheels were delivered yesterday. I’ll get a look at them tomorrow. These are the D type 6x15’s with the center spline. Total cost delivered was just under $600 per wheel. Not bad.

Are they lighter than a wire wheel, Dave?

My Daytons are heavy (IMHO). Years ago when I bought them I had tires mounted and balanced and picked them up to slide on the splines. I remember thinking “Ugh, what have I done”.
Just curious.