I’m replacing my front driver (left) side wheel spinner with a new one from xks unlimited due to the fact that the chrome flaked off. The other 3 are great. Does anyone have an opinion about the quality or fitment of the replacement spinner? I would hate to find out the hard way that the replacements don’t perform exactly like the originals. Thanks!

Repro’s weigh 8 ounces more, are the wrong shape, have the wrong Jaguar legend and can cause problems due to poor machining of the threads and bearing surfaces, usually in the form of knocking during cornering. Take your spinner to a good chrome plater and they will strip, dress and re-chrome for little more than the cost of a poorly made copy.

For what it’s worth I used new MWS spinners on my restoration and they fit just fine.
Yes the lettering is not an exact reproduction, but almost no one will know…
https://www.moss-europe.co.uk/mws-wheel-spinners-jaguar-logo.html

If you keep an eye on Craigslist and Ebay, these do come up

I ordered a used factory spinner on ebay. This repro is going to be returned. Thanks for timely and valuable info!

Hello David,
I know that what you’re saying is fact, but I just don’t get how these after market manufacturers of today can get it so wrong.

A basic machine shop of today consists of a CNC Turning Centre and Machining Centre. The time required on a Coordinate Measuring Machine (CMM) to retrieve all of the data from an original part to reproduce its detail within a very small tolerance would be an hour at most; so not much investment if that part of the project had to be sent out. Once accurate data for the Thread and Bearing Surfaces is at hand, the machining of that detail in a Bronze Alloy, using a CNC Turning Centre, is extraordinarily repeatable and the results predictable; yet these Numb Nuts still can’t get it right. And its not like they’re giving the parts away at bargain basement price.

Same here, I have MWS wheels and spinners. Old spinners and new can be interchanged without issue on my new wheels. Paul

I have had this conversation with Orson Engineering who produce most of the repro’s. their view was “we have been making them this way for 20 years and no one else has complained”. They refuse to engage further.

I have had many conversations with Julian Barratt about this and he has even gone to the lengths of contacting Albion Brockhouse, the original supplier to Jaguar, who say they have the original specifications and can produce copies (as distinct from reproductions) but the minimum order requirement plus the selling cost (about twice that of the repro’s) has caused a pause for reflection.

Currently in the UK a set of repro spinners is £195 whereas a set of originals can be beautifully refurbished for about £250.

They may have acquired the Dunlop tooling but the spinners were made for Jaguar by Albion Drop Forgings Co a subsidiary of J Brockhouse & Co and are stamped ‘AB’ for Albion Brockhouse. They were chrome plated manganese bronze drop forgings based on the Rudge Whitworth pattern with 52mm hub and 8tpi thread and not cheap to produce. No idea how MWS make their spinners but I doubt they are drop forgings.

I put 4 XKS spinners on 5 years ago and they are still in perfect condition.

Sometimes you can get lucky and there are no problems but a lot of people have experienced issues with repro spinners. You know immediately on driving the car as usually there is a knocking or creaking as you put on lock. No amount of tightening will alleviate the problem. Putting on the old spinners always restores the car back to normal.

It follows their spinners will be exact replicas.

Yet, they are not (MWS photo not mine): 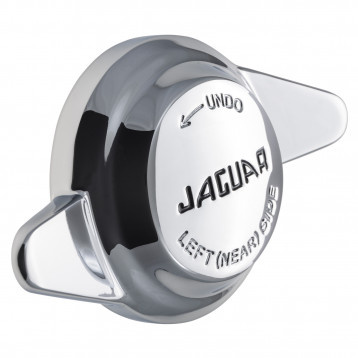 Mine are the same with that skinny goofy looking letter “G” and other details that rather spoil the appearance.

You do get subtle variations to the JAGUAR lettering, and the smaller lettering, and indeed the Arrow Head from repro manufacturer to repro manufacturer.
Of greater concern to me is all the repros I have had seem to be made of a softer brass alloy than the originals seemingly made of a tougher/dent resistant bronze alloy. And I always keep mine on really tight - I would rather have bruised knock-offs than worn splines, albeit the wooden tools work well, so that may also protect the softer repros as well. Never had them compared scientifically/metallurgically so it may be just impression not fact, but regardless there is something to be said for restoring/rechroming originals that do have accurate lettering (of course) rather than simply shopping for the best/most accurate lettering appearance repros.

Nick - their Wire Wheels are no longer accurate repros of the original DUNLOPS, no longer Concours acceptable (where wheels are judged or owners that care), so why would their knock-offs be accurate?

For some reason I can’t explain I have had a lot of spinners. A few years ago after reading David’s posts on the UK Forum I collected 8 AB spinners and had them renewed at our local (and famous I’m told) chrome shop. I say renewed because they go the extra mile including sending them out after stripping and have an engraver work over the small lettering, which was never a strong point on the originals, so it’s just perfect. Oh, and, as David says - they just work better than the repros I’ve had.

That’s great. I’m in Amarillo, Tx. I don’t think there’s a chrome shop within several hundred miles of me.

Well you can always send them up here and take advantage of what we Canadians laughably call money.

I think you may be referring to their lack of a 54 spoke offering?

Nope, although you are correct they don’t make an XK120, XK120 and early XK120 54 spoke 16inch wire wheel at all.
I was referring to the added and very ugly protruding narrow bead around the inside rim of the wheel, that should be smooth, and the fact they now stamp MADE IN INDIA very visibly and prominently on the inside rim, rather than as previously not being inside the rim and hidden when tyre is fitted. Australian concours cars are now getting correct plain rims made, using the new MWS hubs and spokes, as MWS will no longer provide correct/authentic rims.

Side by side comparison of nice original and repro:

The Jaguar logo was not painted in on the S1 cars. Interestingly after Rudge-Whitworth went into liquidation in 1936 Jaguar acquired the rights to Rudge’s wheel business and together with Dunlop continued to exploit the design.