Well, my Jag tech bud is my hero today …

Got the good news that he really got going with Superblack ('92 5.3) 's three long stuck-on wheels today.

Turns out all they really needed to break loose from their “mating” were good hard wacks with a RUBBER mallet.

Until now, he had been using a 10-lb. sledge w. a short piece of board on them, as I posted some time back, as well as doing the “driving slowly with the lug nuts loosened” trick. Here all these weeks I assumed he was using one of my two rubber mallets in the endeavor.

When he found out I had a rubber mallet (actually I own TWO) he gave it his all again and off they came.

When I went out to view her she was up on cinder blocks (rear) and low-profile floor jack (front) level, with all four wheels off.

As to the wheels, yep, a bunch of rust on the inside of the three stuck wheels as well as on the wheel hubs.

We are cleaning the hubs and inside of wheels up with brake parts cleaner spray (probably more than once over) and a wire brush, followed by spraying and soaking (repeatedly) by Rustoleum rust remover spray gel. Will then take the wheels and tires to NTB for new Cooper tires, two at a time, in Superblue and reinstall ourselves, with some anti-seize put on the contact points. btw, the old tires turned out to be “Prime-somethings Sports” brand … white letters, with the white letters turned inside. I had never heard of those before, and wonder if they are even still made.

We can now finally have a good look under the car all over, or I should say, at least my tech, can, b/c HE can fit under there

He would take pics with his phone, and share them with me (I will post some of them later on here). As to the brakes, all four badly need new pads. There is slight scoring on one of the front rotors, but the rear passenger side rotor has a bit more, but still not “un-usuable”. However, given what a major PITA it is to replace those inboard rotors, we are just going to go with new pads all around and hope for the best, at least for the time being.

We see that most of the underside rust is confined to the passenger side rear, as we suspected, and the patch kit I got from the U.K. for the area that the radius arm on that side mounts to is not going to be quite large enough, so whatever welder we use is going to have to do some additional “fabrication” work. Oddly enough, the arm itself, along with its bearings, seems to be fine, but obviously the “cup” is gone as well as that attachment point b/c of the rust (see my pics posted a few weeks ago). We also can clearly now see the 4 suspension mountings back there. I have the new ones, and I guess it would be prudent to replace them, one at a time, once we have the new tires on her.

After looking things over, me and my tech believe that the car had indeed sat on some swampy or marshy ground for quite some time with the tires flat, leaving the rear section (particularly on the passenger side) to be in contact with (or even partially settled in) some muddy, clay-ish soil for a long time.

After the restorative welding is finished, will coat that bottom well with two coats of Rustoleum’s 2-1 Rust Remover + (Rubberized) Coating, as to the immovable and non-exhaust parts. The rest will get that black rust preventative paint (high heat version for the exhaust parts).

Not a fan of the cinder blocks, well done with the wheels though, I am surprised it was a rubber mallet that did the job.

Surprises me, too. I would expect maybe a dead-blow hammer. On my own XJS, loosening the lugnuts about an eighth inch or so and driving in a tight figure-8 pattern at about 5mph worked easily. One other time, on an XJS that wasn’t driveable, with the RF jacked up until the tire cleared the ground, sledgehammering on a 2x4 pressed against the rim finally did the trick after all else failed… hated using that much force for fear of breaking or bending something.

I would think that it is probably a combination of the previous attempts, not just a few whacks with a rubber mallet. Perhaps the penetrating oil just needed a long, long time to work. Was there any evidence that it had seeped into the frozen joint?

Not that we could see, and remember we just tried this on the one stuck front wheel (the passenger side). I didn’t apply the PB Blaster “rounds” to the rear wheels, until we saw if it had any beneficial effect with the front wheel (which it apparently didn’t).

The above being said, after getting the wheels and hubs cleaned up, de-rusted and wheels put back on, but the lugs not fully tightened before lowering to the ground (we didn’t want the nosey neighbors/management complaining about a car up on blocks and w/o wheels during the night

) my tech noticed something odd. He thinks that, despite all that, he suspects that the wheels are a bit “sticky” even now (we did forget to put the anti-seize on the contact points before replacing the wheels this time, btw).

He says they likely won’t need to be “hammered” to take off again tomorrow, but will need a bit of extra force that should not be needed to take off wheels.

wth??? He says if this is in fact the case his primary suspect is that the wheels are warped. I find that hard to believe, given how tough those alloy wheels are. How could they get warped, esp. ALL four of them? Also, Superblack drove/handled alright on my drive to the nearby car wash and gas station a few weeks earlier. Possibly the PO used heat to try to take them off (but yet they show no sign of heat/flame damage)?

Fingers crossed it turns out they are not warped

He did say after he sprayed the inside of the wheels with the Rustoleum rust remover gel spray the metal turned a “whitish” color. That does seem odd, I admit, based on my previous experience with the product. In any event, when NTB goes to try to dynamically balance the wheels/tires we will know for sure, per my tech, b/c if they are in fact warped they will be “unbalanceable”.

You should never drive on loose lug nuts, you can bend the wheel studs. Should probably check them out.

If the lugs are just loose–less than a half turn–you can slowly drive it, to loosen recalcitrant wheels.

That is my view, but it is the bottom line that matters, wheels off prevention fix in progress!!! Yahooo!!!

DUMP THE CINDER BLOCKS. Bad news ~~~~ Get “GOOD” jack stands and leave the jack in place!!

Or cut up some wood for cribbing…

Get DavidBboger at everydayxj to send you a big chunk of sound flooring and have the welder trim to fit and weld it in.

Do a you tube search. Find “Iron trap Garage”. They work on older and far rustier floors. Excellent technique I making and fitting patches…

Kudos on “persistence” lacking a middle name or initial, I often use that!!! Some term it just stubbornesss…

Cinder blocks work fine, IF used properly. And no more than two high.

Inner cell wall in a vertical direction, the buggers will hold up the planet: inner cell wall horizontal, I wouldn’t trust then under an Isetta!

Just wondering if the wheel center bore, and the axle stub, of the affected wheels, have enough corrosion that is still causing such a tight fit that was found on replacement of the wheels after removal - as stated, seems odd that the three wheels would each have been warped - Tex Terry, II - 1991 XJS V12 Classic Coupe, 1986 XJS V12 Coupe - 5/22/2020 1325hrs. EDT USA.

I would make sure that both mating surfaces of the wheels/hubs are well cleaned wire emery paper if needs be.

“Used properly” should be defined as “not to be used as jack stands.” The problem isn’t strength, cinder blocks are plenty strong enough. The problem is that when they decide to fail, they fail suddenly and without warning. And it’s difficult to tell a sound cinder block from a faulty one before it crumbles under your car with you under there.

I don’t recommend getting UNDER a car with them: only as away to hold it up.

Cinder blocks!??!!?
They are only one step up from this! 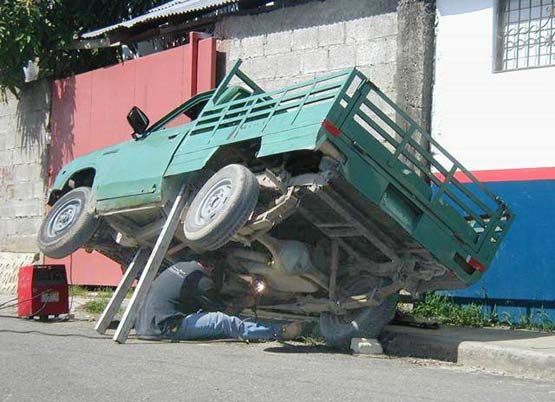 How did that guy get that truck in that position?

96 of his closest friends?

You should never drive on loose lug nuts, you can bend the wheel studs. Should probably check them out.

Ut oh, Gregmatic … would that maybe explain why the wheels are subsequently “sticky” on removal?

That is my view, but it is the bottom line that matters, wheels off prevention fix in progress!!! Yahooo!!!

DUMP THE CINDER BLOCKS. Bad news ~~~~ Get “GOOD” jack stands and leave the jack in place!!

Or cut up some wood for cribbing…

Get DavidBboger at everydayxj to send you a big chunk of sound flooring and have the welder trim to fit and weld it in.

Do a you tube search. Find “Iron trap Garage”. They work on older and far rustier floors. Excellent technique I making and fitting patches…

Kudos on “persistence” lacking a middle name or initial, I often use that!!! Some term it just stubbornesss…

Thanks, Carl … Some VERY helpful guidance there … I may need it!