Where Does This One Go?

I’ve seen vendors on Ebay selling this part, claiming it is a “seal” for the auxiliary fan switch. However, looking at the switch unit in the factory parts manual, the factory service manual literature, and the Classic website, it does NOT show this part as being part of that unit: there is only the switch itself + a copper sealing washer. The same thing is what Superblack has on her, too. ???

Is it possibly something designed aftermarket to go over the switch to protect it from getting wet in the event of a coolant leak or from other debris?

I think they have the wrong description in the title. The “For Water Rail” is probably more likely, looks like bush #13: 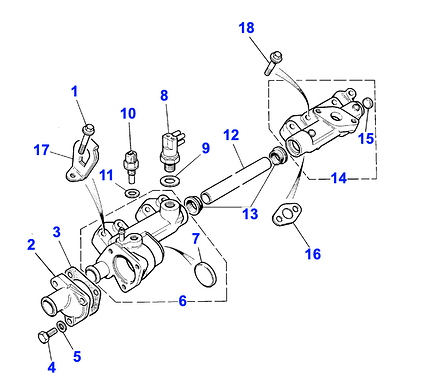 Hi Paul,
That seal was used on earlier cars, from early 1979 to Vin 101854. The switch was not threaded, and simply pushed into place. The seal is the same part no for the water rails, as Cosmo points out.
Later cars have the threaded switch, with a washer, that screws into place- a better arrangement, IMO!

Ah k, thanks for the clariification. Well, since I may end up having to pull that “water pipe” anyway (well the one on the other bank) since it looks like we are not going to be able to remove the two twisted-off thermos cover bolts (i.e. r/r the whole thermos housing), should I go ahead and order a couple of them?

You will need two each side. I usually order a couple extras of stuff like that in case I booger one up . They weren’t expensive

I was speaking about the top hat seals on the water pipe.

LOL @ “top hat seal” … Love how Jag (or its techs?) come up with so many nicknames for their parts, usually one that follows “form” …

For the water pipes, these seals are perfectly reliable – because pressure is equal on both ends and there is no inclination for the pipe to move. First hint of trouble usually comes when the pipe rusts, or when the rubber simply gets so old it’s crumbling. I recommend replacing the pipes with pipes that won’t rust; I used 5/8" copper tubing intended for HVAC applications on mine, others have machined something from stainless steel.

The same seal used for the early style fan switch is not reliable, because pressure in the system is trying to blow the switch out of the hole. When it does, you’re in big trouble. Anyone who has this older style switch is advised to replace the entire water pump inlet elbow with the later type that fits the later threaded switch.

LOL @ “top hat seal” … Love how Jag (or its techs?) come up with so many nicknames for their parts

Just be careful, I’ve seen the poly steering rack bushings referred to as “top hat” - definitely don’t want to get those two mixed up.