Where does this wire go?

Does anybody know where this red and white striped wire that is behind the center console go? It looks like a Barber Pole stripe and is a cloth and not a rubber insulation. 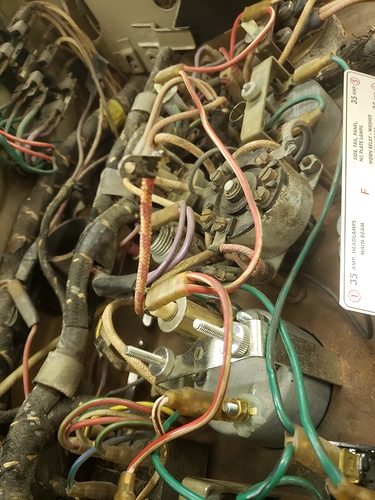 I think that is the common power for the instrument lights.

Wait: I missaw which wire you were referencing. That lug suggests a main feed. If you can use a buzz box, you can trace out where it goes snd what it feeds.

I agree. Here is the unused fog lamp wire behind the center panel of my S2:

Color is actually Red/Yellow (bad if it’s a snake, okay for a wire).

I don’t have the electrical system up and running yet so not sure if my lights are working. Also, do to body still being worked on or lights are not installed. It does look like the fog light wire described but I guess I’ll have to wait and see when I get all the electric old stuff up and running. Thank you all for your help.

FWIW - Here is the other end of that wire (upper left in pic) under the left hand head lamp: 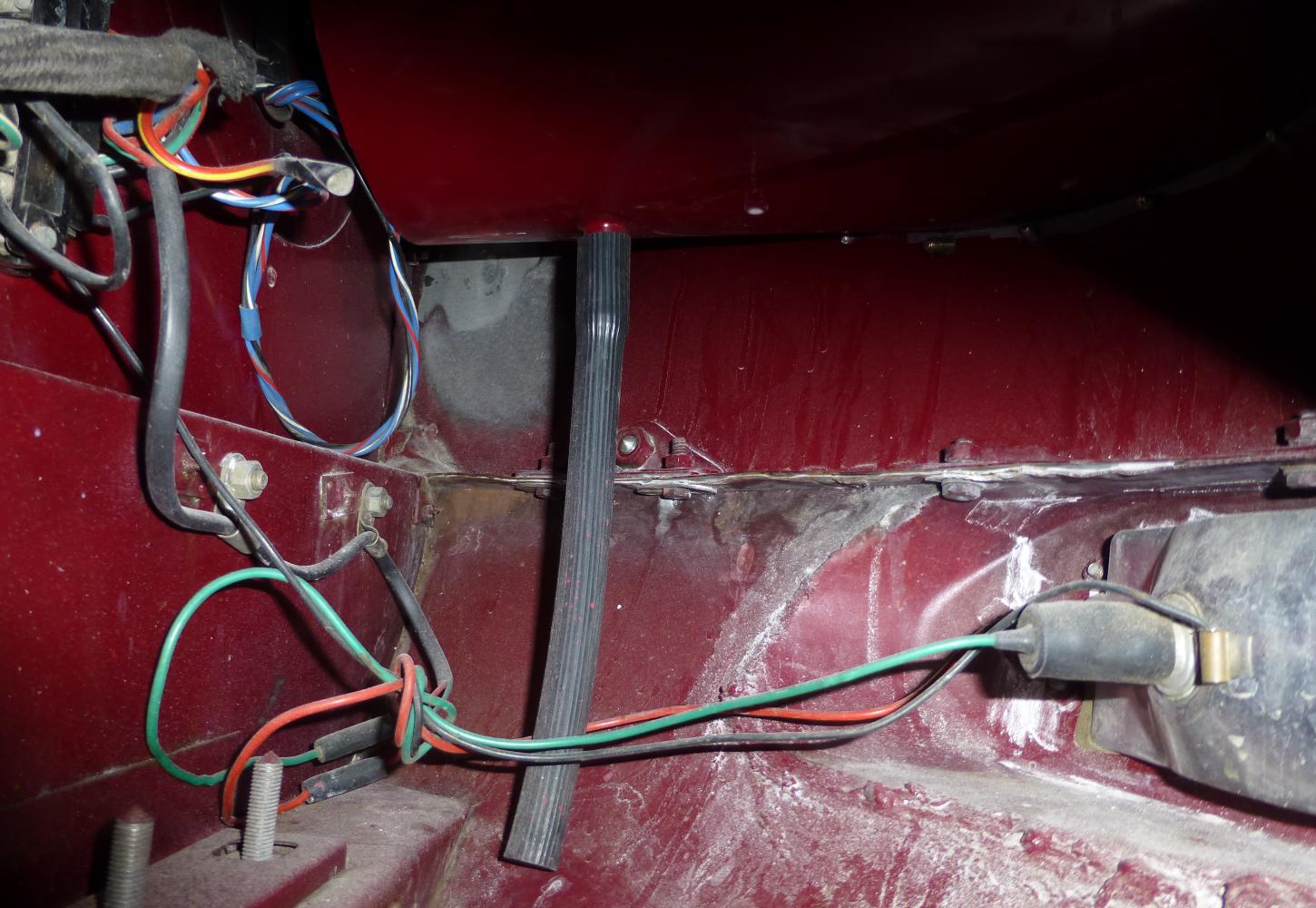 It has vinyl insulation there.

I have the same unattached fog light wire 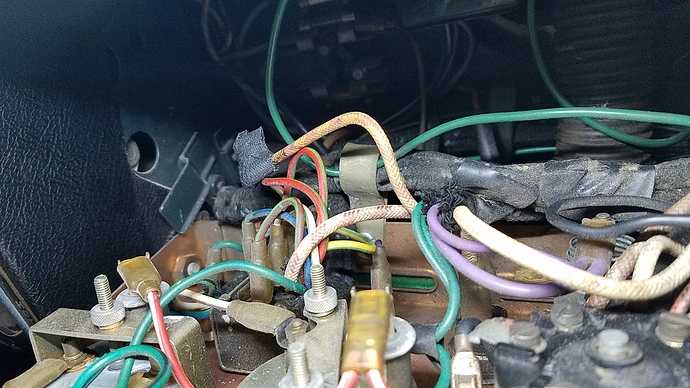 I have a twofer today as the radio instal from hell keeps unveiling new mysteries.

First pic: The orangy/pinkish wire circled is now loose and I can’t figure out where it was previously connected. Anyone have any ideas? 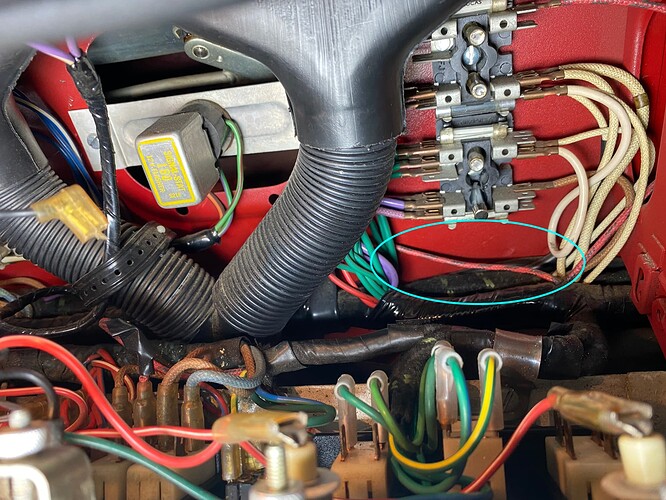 2nd I found this ribbon style wire coming out of the center shift console and wondering what it’s from. 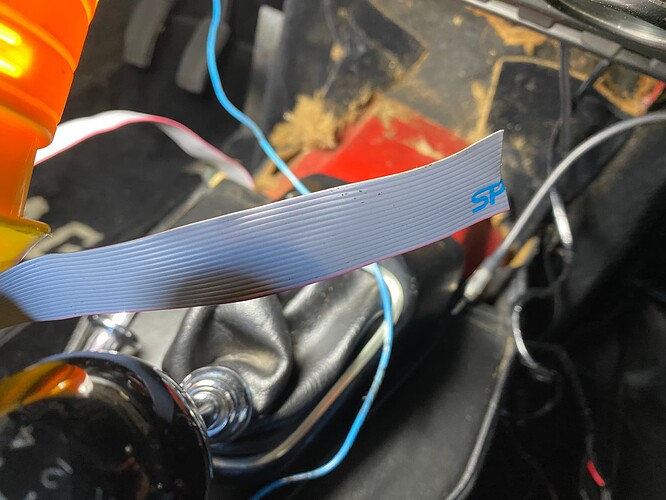 I don’t know on the red-black wire, but I can guarantee you the ribbon wire is not OEM.

You could always pull the console and find where it terminates. In fact, that might be a good idea because it could be connected to something it shouldn’t be. Did the PO have something installed in the center console cubby?

Does this help with the first question: 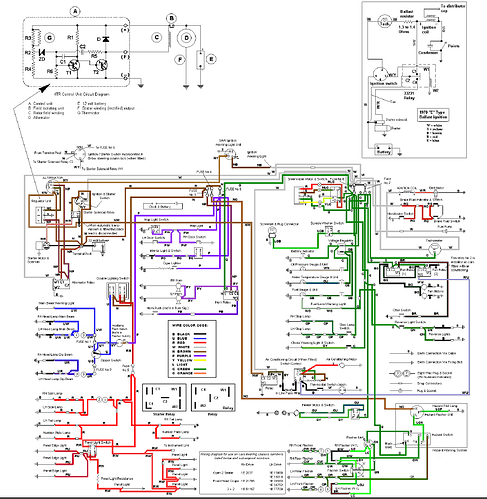 The only thing I can think of is the aftermarket alarm. The hardware is still under the hood. Been wanting to remove, but was weary of fouling up something.

I appreciate this… I can’t magnify it enough to decipher, but suspect that it’s beyond my level of knowledge!

In addition to the Red/Black wire from the sidelight switch to the input of fuse #5, there is also a second Red/Black wire on some models which goes from the input of fuse #5 to inline connectors for the tail lights, side lights, and license plate lights. It bypasses Fuse #5 for those circuits and was only connected for certain LHD European markets (Germany was one) - presumably because of local regulations. In cars delivered to other markets the end of the wire that was fitted to the input for Fuse#5 is usually not connected, and can be found floating around behind the gauge panel. If your tail lights are working, the market-specific wire is probably the disconnected one and, provided it is properly insulated, can just be tucked out of the way.

Thank you for clearing up a wiring mystery for me. I have a 70 FHC (LHD) and have recently installed new wiring harnesses, got everything connected and working and ended up with what appears to be redundant red/black wires, one behind the dash, right side, one in the passenger footwell and one in the drivers side footwell, all connected together. I had decided they were redundant but did not know what they were to be used for, and now I know.
(I still have an extra Purple/White wire on the drivers side that may have been intended for a footwell door light…)

Thanks David, that makes the most sense as there is nothing that makes sense within reach. It is the same colored wire and comes from the same wrap as the wire connected to the right side of fuse 5.

The loose one has a female disconnect tab that is wrapped in electrical tape (but still accessible).

Once I get the rest of my project done will give everything a check and perhaps insulate it a bit better before tucking back away.

I would have killed for a color coded schematic back in the day with I was rewiring my car. Craig, where can I find one?

I need to learn how to read those. The colors are pretty, but it’s all spaghetti to me.

I am by no means an electrical guru but rewiring my car was not as difficult as I thought it would be. Grab any end of a wire, on the schematic you start at that end and follow the line until it ends. Then you go find that end on the car. Check it for continuity, I used an ohm meter but there are varous continuity testers available. There are some symbols on the schematics but those aren’t too tough to figure out. Also keep in mind that a wiring schematic is not the same as a wiring diagram. The schematic has little or no representation of where the connections actually are whereas a diagram will be layed out to reflect in general where things are physically. Good luck, I hope this helps.