Hello, I had to replace the wiper motor. Just the motor obtained from a Jag parts supplier, so I haven’t touched the wheel boxes, just reconnected the rack to the new motor and plugged the connector back in. Now it parks on the wrong side. I am pretty sure the wipers should point away from the steering wheel on RHD,(which this is) and LHD.
Is there a way to correct this?

My understanding is that the wipers park in front of the driver so that area of the screen is the first to get cleared when it starts moving.

Robin is correct; wipers park in front of driver. The part no is the same for LHD and RHD; these motors park by reversing the direction of travel, so I assume the difference in park position is achieved by the polarity of wiring in the dash switch, but that’s a guess. Or could be in the wiper boxes, pushing instead of pulling, perhaps.

I am pretty sure the wipers should point away from the steering wheel on RHD,(which this is) and LHD.
Is there a way to correct this?

Series 2 always parked on the right. Every series 3 and later XJS in Australia had (has) wipers parking on the left, eg in front of the passenger. Maybe Browns Lane were trying to save a quid.

Chances are if replacing a wiper motor these days it’s going to be a later LH parking motor but you may have had a series 2 in there. Edit; if your wipers are parking on the passenger side you have the correct motor for a series 3.

You can change the orientation by reversing the wires at the motor. There is a thread here somewhere about that. I heard you can’t change it at the switch inside the car plus a series 3 switch is on the other side of the steering column.

I am pretty sure the wipers should point away from the steering wheel on RHD,(which this is) and LHD.

Just read your post again. Kevin and Dave are correct. If wipers are parking on the right on RHD it’s better.

I’ve just looked at some photos and Don is correct; S3s all park on the left. I’ve never noticed that before. I doubt it involves saving money as it seems there is no difference with any of them with regard to LHD or RHD, just different part nos for S1, 2 and 3. Part no for S3 is JLM10632N ( SNG Barratt)

I don’t know if series 2 and 3 motors are interchangeable so I suspect Punky may now have a LHD motor in his car. Ironically that is better. Interestingly LHD cars park on the right!

Looking at SNG Barratt catalogue, there is no difference in part number between left and right hand drive for either motors or wheel boxes. I suspect the parking side is down to electrics.

I suspect the parking side is down to electrics.

Tell me I need to get out more but something just occurred to me.

A bit of trivia I guess but with the part numbers being the same between LHD and RHD motors and they’re mounted on opposite sides of the engine bay this would mean the cable will rotate in opposite directions in the wheel boxes.

This should mean the switches mounted on the motor are the same between LHD and RHD and it’s just which side the motor’s mounted that determines parking orientation.

Must be switches though if Punky had two different parking motors.

Are they mounted in opposite sides? I’ve only seen RHD and they are beside the battery in the left inner guard. Makes sense, I guess, otherwise it would be a PITA to work on behind the brake booster.

Thinking further, you need to remove\refit the cover over the crank mechanism with the motor in situ, so the motor would need to be upside down in LHD to access that cover. Is that how they are mounted? Is there space to do that?

My RHD S3 parked on the passenger side.
The motor is always on the battery/passenger side. The booster side gets the vacuum reserve canister. The unused steering wheel hole gets the vacuum lines.
The motor part is always below the wheelbox as mounted. Yes, it is annoying.
If the park switch actuator is part of the nylon wheel and not part of the sliding mechanism, I don’t know how to change it 180°.

Now it parks on the wrong side. I am pretty sure the wipers should point away from the steering wheel on RHD,(which this is) and LHD.
Is there a way to correct this?

**
Where did it park before, punkydog - and in what position, then and now?

Salient points; witch self-parking fitted, the wipers should park at the bottom of the screen in front of the driver - but it can be ‘trained’ to park on either side. The parts and electric connection are identical for RHD and LHD except; the motors are behind the battery - which is on the ‘left’ with RHD and the ‘right’ on LHD. The parking is effected by the park switch on the motor - which can be set, at the motor, for either ‘left’ or ‘right’ parking. This operation is described in various posts in the Archives.

The motor is connected to rotate in the same direction for all markets - and is electrically reversed by the stalk switch in the off/park position. In in this position the motor is stopped electrically by the motor’s park switch. Repositioning of the wiper arms position may be required…

Are they mounted in opposite sides?

LHD cars have the motor mounted on the right. It’s just reversed so the gear cover is facing the inner guard and the switches are exposed. Good if you want to fiddle with the wiring but a pain if you just want the gear cover off. 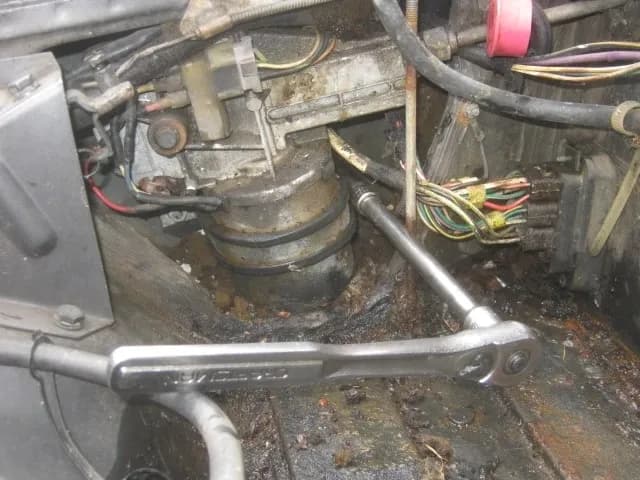 Hello Frank, definitely parked neatly to the left, in my case, UK, pointing away from the steering wheel.
I will have another through the archives for info on how to change it.

I will have another through the archives

I couldn’t find the thread I was looking for but from memory it was a matter of swapping wires on the back of the park switch. Can be fraught with danger because the exposed wires are usually old, short and brittle and if original are hard soldered.

I will have another through the archives for info on how to change it.

And if the wipers park with the new motor as it did with the old, and you can live with that parking - is it worth the bother…?

Indeed , I might break or loose something. Perplexing when the wipers started to wipe the hood/bonnet. One wiper arm is slightly cranked should that be the lower or higher one?

To expand on the subject, Kevin - changing from RHD to LHD, or vice versa, involves turning the rack, with motor, 180 degrees. Which automatically should park the wipers in front of the driver in either - so in your case; which side is the motor in your case…?

As the motor rotates, the pin on the gearwheel alternately push and pull on the rack - and the rack acting on the wheelboxes, making the wiper arms sweep back and forth. The park switch ensures that the pin stops at the extreme ‘push’ or ‘pull’ position - and the wipers start the sweep in the correct direction.

Two asides; finding things in Archives or FAC require using a word in the post heading - and if the poster has put the relevant park switch procedure under an irrelevant heading…it’s a problem? Secondly, with wipers parked in front of the driver; the position of the swept area is more suitable for driver’s view…

o expand on the subject, Kevin - changing from RHD to LHD, or vice versa, involves turning the rack, with motor, 180 degrees. Which automatically should park the wipers in front of the driver in either - so in your case; which side is the motor in your case…?

Agreed. My issue was the park switch was out of adjustment (somehow) and the wipers then swept too far to the passenger side. Simple fix once the cause was diagnosed.