I observe that early 140s have a wiper knob with a text lay-out, whereby the H N P start at "9 o’clock”. In 1956 we see a number of XK 140 instrument panels with knobs that I would call the “10 o’clock” lay-out. See pics below.
Are there XK 140 owners that can help in getting a better insight whether my assumption is correct? Does your XK 140 have one of these wiper knobs and what was the built date of your car?
Your help is much appreciated. 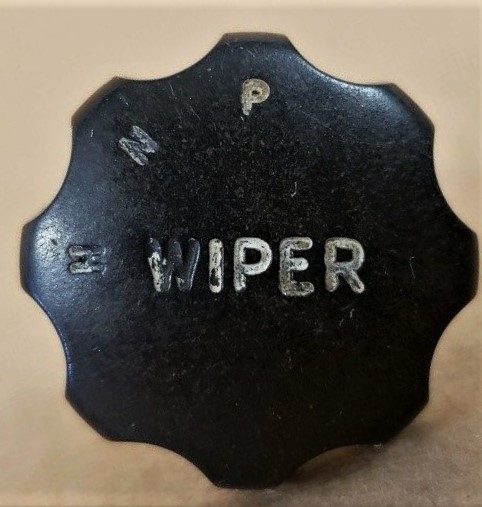 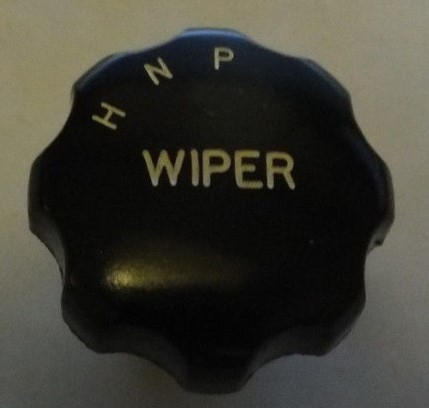 I’ll look at my Oct., '55 build-date car when I get a chance. Notice the difference in the gaps between “positions”…could the tighter spacing actually mean a shorter throw indicating different switches were used?

Yes, I guess you’re correct. There was a change-over from a PRS.5 switch (XK 120) to the PRS.7 switch for the XK 140. This switch is listed as a “three-way” PRS.7 switch Lucas 31427.
I don’t have the PRS.7 switch at hand right now, but the “steps” between the positions might be smaller for the PRS.7 switch compared to the PRS.5 version.
But as this PRS.7 switch was used for the entire period the XK 140 was in production, this would imply that for the first knob Lucas 316.646 the markings would not be in line with the positions. Can’t remember whether that was the case on my 1955 XK 140 that had the “9 o’clock” knob.
The 318.168 knob was also used on the TR3 and the AC Cobra (so even after 1960 when Lucas said it was superseded by another knob).

Bob, I assume these are PRS.7 switches, although they do not have a specific marking to indicate it, as found on the bottom of the PRS.5 switches. The bottom of these switches is simply marked Lucas England. 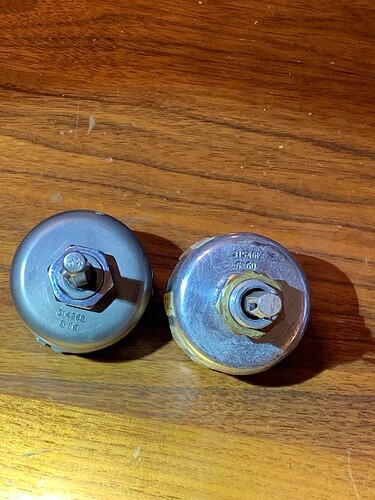 Like the PRS.5 switches, these were made with either short-threaded boss or long-threaded boss switch bodies. The switch on the left is a four-position, stamped 31426B and dated 3 58. The switch on the right is a two-position, stamped 31546F and dated 6 60. (I don’t have a three-position version as might be found on an XK140 to operate the wipers.) 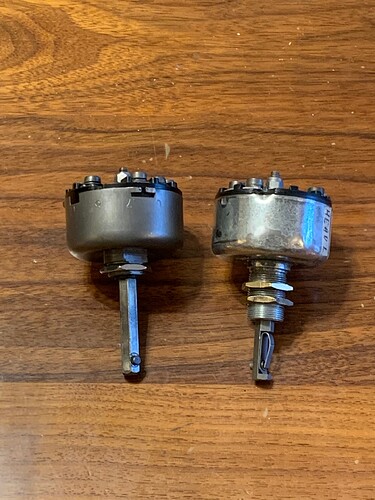 Here’s a view of the bottom of these assumed to be PRS.7 switches. The switching function appears to be a more robust design compared to the PRS.5 design. 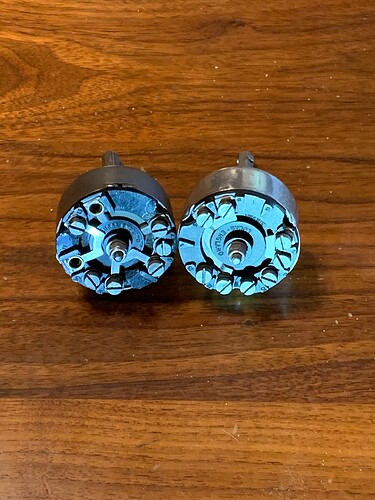 I have a 140 with a build date of November 20, 1956. The switch is stamped 314270 and is dated 7 56. There are 11, not 12, positions on the back, 6 of which are used. The knob is the same as the second one posted by Bob K. above which correspond to the switch’s three positions. Each letter is at the 12 o’clock position when selected. The back does not match either of the switches in Mike’s photos.

Here are photos documenting what I stated in my last post. 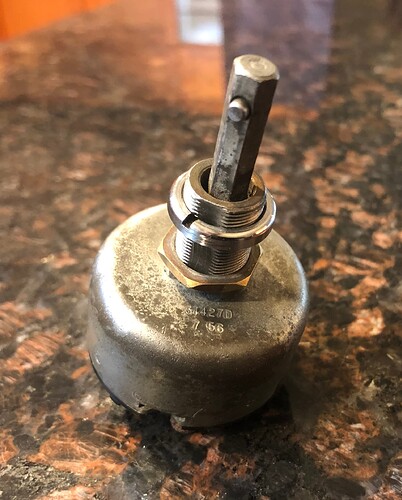 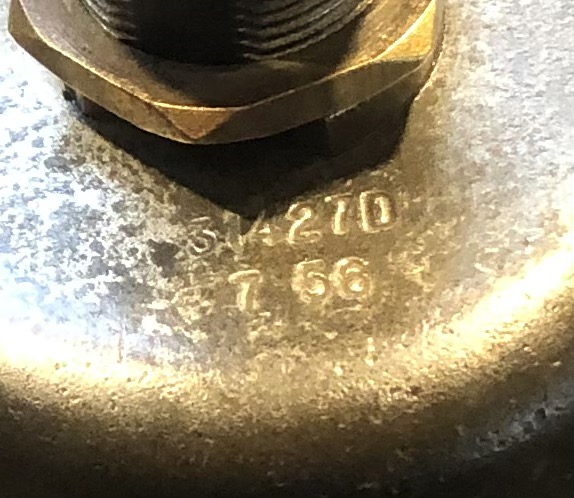 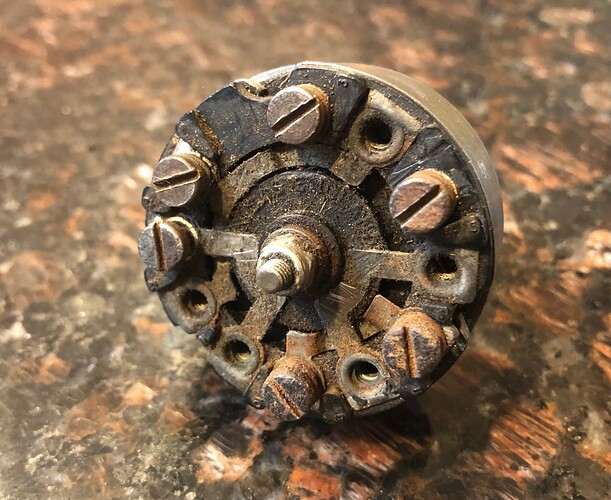 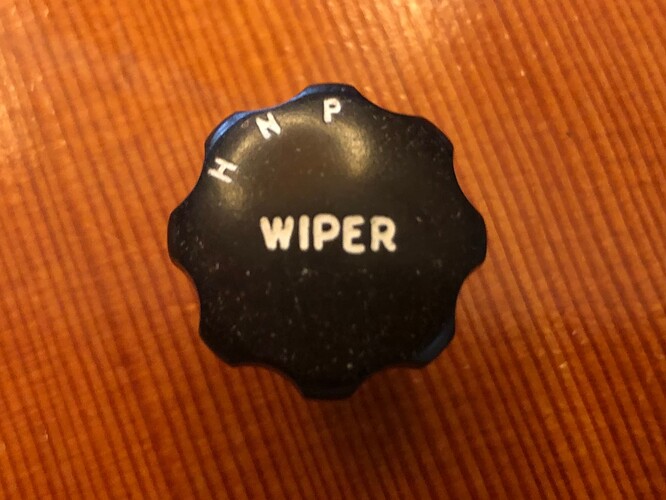 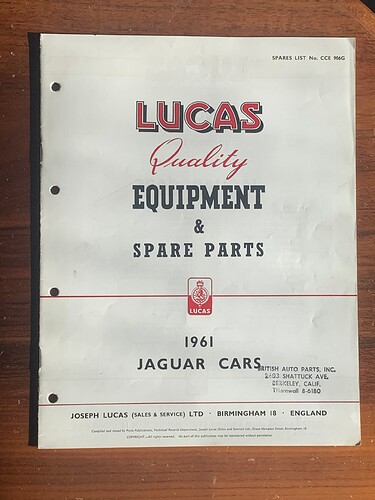 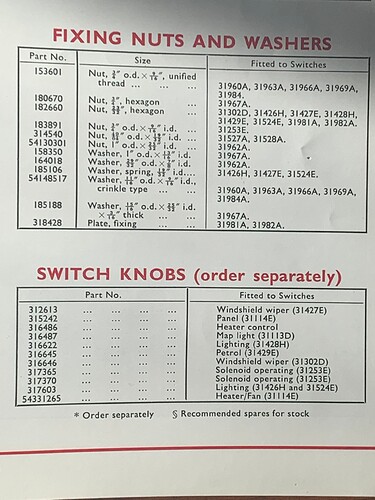 image1920×2560 285 KB
The first image below seems to confirm the center shaft, long-threaded boss switches used by Jaguar. I think we can assume these are the PRS.7 switches. I maintain these were the type used on the XKs. 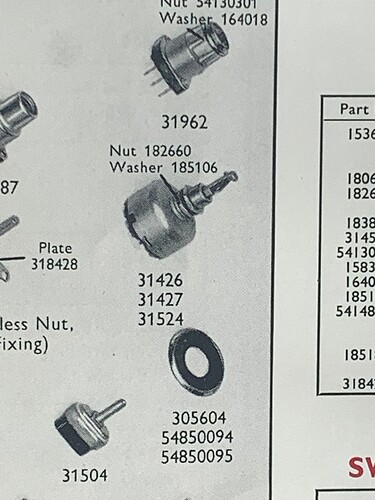 The second image below shows that Jaguar also used two short-threaded boss switches. The upper switch appears to be a PRS.5, and the table above shows it was a wiper switch - likely for a saloon. 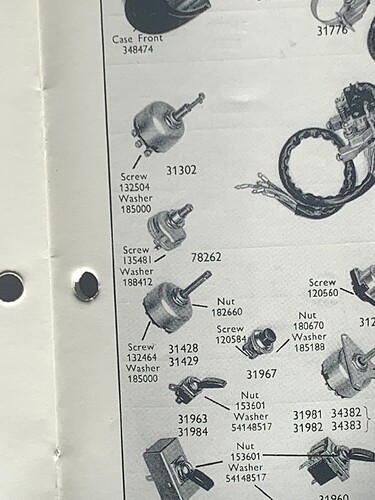 I have stared long and hard at these switches. My 140 has the same 31427 with the long bush, as Bob’s. The PRS series (I guess this stands for Panel mounted Rotary Switch) are generic types, the actual switch function can vary a lot as noted by previous contributors. PRS7 appears to be able to host up to twelve terminals although confusingly, the terminals are marked 1 to 13. ( There is no terminal 9). 31427 has 11 available with a space where terminal 2 would go. There are four interconnections on this switch.
I worked out the wiring once a long a time ago and drew diagrams that made sense of it with DR1 or DR3 motor connected. It’s still on my website if anyone’s interested DR1 Motor

Thanks for this info: I guess you’ve solved our problem for 99%!

So, your November 1956 built XK 140 has switch Lucas 31427D manufactured some months earlier (July 1956). When I referred to 12 positions I mean that the engineer at the drawing board first draw a circle and divided it in 12 equal sections (every 30°) . That he didn’t use all 12 points for contacts etc. doesn’t really matter.
The knob you show (assuming it’s from your 1956 car) means that this is (most likely) the later knob Lucas 318.168 that replaced the earlier knob 316.646. You state that your knob exactly matches the “clicks” which means that it was developed for a PRS.7 switch.

All we need is now is a confirmation that the earlier XK 140s (that all had this 31427 switch) have a knob that doesn’t have each letter at the 12 o’clock position when selected. That would proof that Jaguar started indeed with a PRS.5 knob on a PRS.7 switch.

What built date is your 140? Does it have the early or later knob?

I remember your wiring schemes very well. They saved me, when I had problems in reconnecting all the wires to the wiper motor after an overhaul of the motor.

Bob, The knob is original to the car. I redid the lettering so it looks a little newer. And for what it is worth, I have an OTS.

According to the factory records, my car was completed on 5th November 1955 although not delivered to the supplying dealer until 10th May the following year. During this period, it remained at the factory and its original low compression engine was changed to an 8:1 engine and the factory records amended. Its original 7:1 engine went to Zambia. This resulted in an engine number out of sequence with the body number which puzzled me until Messrs. Payne and McGrath explained what had happened. It must have been given a new commission plate by the factory because the numbers on it match what the car has.

Sadly, I can’t tell you anything about the knob as the entire set disappeared while the car was in a professional workshop along with the original indicator and ignition tell tales. I had to replace the whole lot with repros from Barratts. 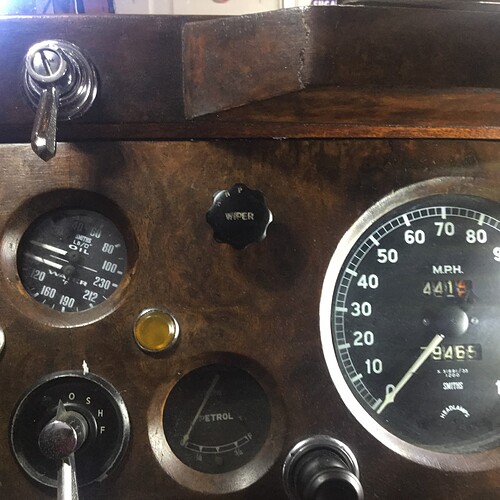 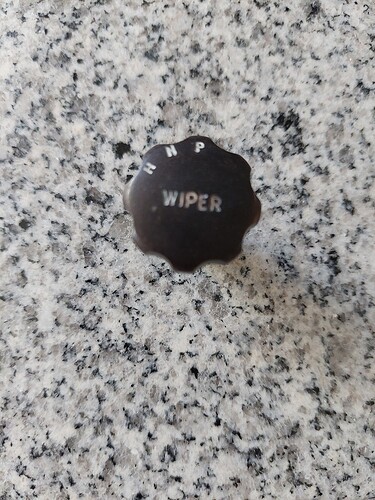 That’s very valuable information. This would imply that the introduction of the “10 o’clock” knob on the XK 140 would have taken place somewhere between August and October 1955 (if my and your knob are original to the cars). This would be roughly one year after XK 140 production started and sufficient time for Lucas to manufacture a proper “PRS.7” wiper knob for Jaguar. I’ve added photos of these two knobs and it’s clear that the same “font” has been used for the text on both. 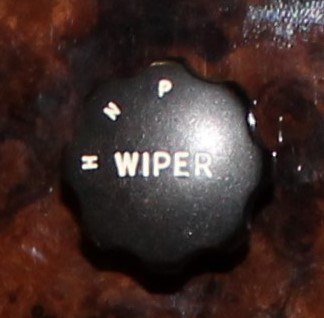 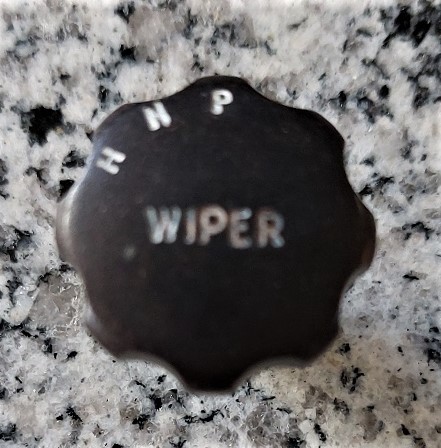