Dial indicator on the crank nose (after removing the damper and collet) will tell you if crank is bent. I saw someone on JL say they used a hydraulic ram between crank and cylinder head to break the head loose…that’s what would happen.
Did you check to make sure damper is not loose?

Sounds like the metalastik of the crank dampener has failed. Time to get a new one!

Don’t start this engine again until you resolve this. It’s damaging your bearings and if the rubber totally fails the damper segments will separate and go flying through your bonnet. I sent mine to Dale, turnaround in a few days, $170

I used a suitable crowbar but could only test in one position. Rock solid. It is ”hammered” in position with a cone fitting I think.
It has a small pulley for the fan and generator belt. I presume that that is secured by 4 screws onto the damper!?

Correct the pulley is attached by 4 bolts and rust. You’ll need to remove the damper to examine it. Maybe your split cone has failed. Also very possible that the rubber has petrified, especially if it’s original.

Hi, I used Damper Doctor or Doctor Damper, they rebuilt my old one. 29 years ago and it still is fine.
Regards,
Allen

The damper is held to the crankshaft by a split cone (and woodruff keys for orientation). The small pulley does come off separately and the large bolt should be 1 5/16“ or 33mm.

The damper should be stuck pretty good but it will come off. Inspect the rubber that bonds the outer weight to the inner part. If the outer ring came off you‘d be in trouble. Same goes for the crankshaft out of straight of course. Maybe it’s fine - how much out of round is it?

Perhaps 5mm (out of round/flat)
Not more

Is it the pulley wobbling or the outside rim of the damper? I’d test it with a dial indicator. Just leave the ignition off and have someone press the button on the solonoid while you watch the gauge move.

It is the large metal rim of the damper that I see wobbling when looking down, to the right of the water pump (when viewed from the front).
Just compared it to my Mk 10, which I am driving now(to detect a noise behind the instr panel). On this car the damper wobbles perhaps 1mm, but on the 150 around 5mm.

The wobbling is at idling of course. Rock steady on turned off engine.
Can it be the split cone, part 34, that prevents the damper from sitting exa tly at 90deg to the crankshaft!?! 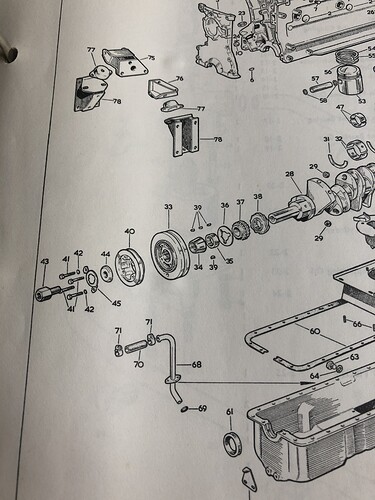 If 34 causes the wobble, 40 will also wobble significantly. As Erica said, compare 40 and 33 in terms of runout.
Since 43 is a very tight bolt (was it around 230Nm?) I don’t think it can misalign by much given it’s a tight fit on the cone. You‘ll need to determine if it is the solid part of the damper or only the outer ring. If it is, and this is likely, the outer ring, and it is out of whack by that much I would first see if the timing scale is still accurate (a dowel through the spark plug is good enough) and then if the rubber shows any sign of damage (can you pry the outer ring away from the damper)?
As you do not want the damper to disintegrate on a running engine better remove it if any doubt.
One would think that the damper, if it were alright, would only ever want to move in the direction of rotation and not axial or radially.

Here is an XK140 damper that came apart as I removed it from the derelict engine which my brother found abandoned in a field. 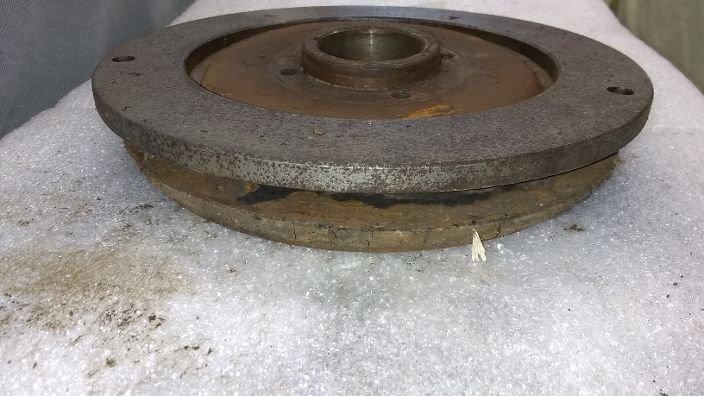 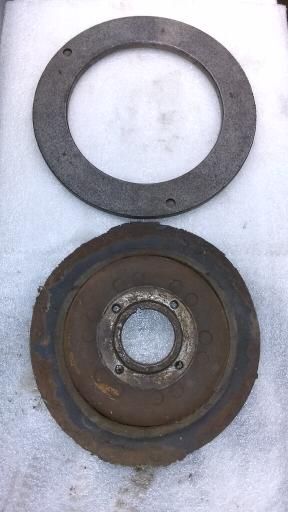 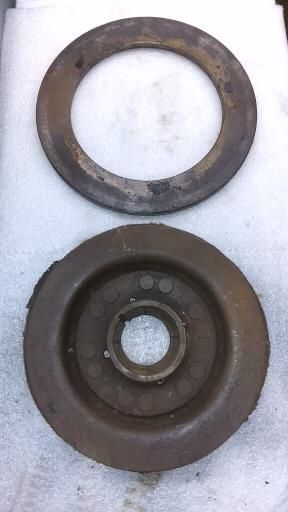 IMG_20210511_075109108288×512 21.7 KB
You can see the remains of the rubber on the inner ring. I forget why I cleaned up the outer ring, maybe was looking for timing marks.
The cone was not broken, but they can indeed break. I found a broken one on my 120 when I had my damper rebuilt by Damper Doctor, and I think it broke due to vibrations of the bad damper. So be prepared to find a broken cone, or at least look it over carefully. It is C.2466 on 120, I forget where I got a new one but I think they are pretty standard for all XK engines?