Hi. I had the rather frightening experience of an engine shutdown on the motorway.
2014 XF 2.2 diesel sportbrake. 65,000kms and always serviced.Mainly long hot runs. For reasons to complicated to explain the last service was done by Ford. Oil, filter and air filter were the only things changed using Jaguar parts. I did have an engine check (yellow) light come on and battery light briefly. I had just driven 60km with no issues at all, everything working as normal. Stopped at lights, then joined the motorway as I accelerated away the dash started flashing and the engine shut down. Not limp home, complete shutdown. I could not restart the engine. Such a low mileage and well looked after car, I am at a loss. Its at the Jag dealer now awaiting examination. Could it be codes set off due to battery being low? Are there possible issues when replacing an air filter, sensors that need reset etc? I know Jag will run diagnostic checks but I am expecting the worst so they can make lots of money. Forearmed is forewarned etc. Appreciate any advice at all, thank you.

Was it dead electrically? Did the engine turn on the starter?

Yes the dash lit up and the starter motor tried to turn over.

Whatever happens ask for the codes that the dealer pulls down, then you will have an idea what happened.

Yes I will do that thanks.

Well we still do not have a result and I starting to despair at what I thought would be easy enough to find through diagnostic. The care has been wit the dealer for 5 weeks while they waited for a new fuel tank pump which they said was the problem.

The following is the latest from them, its not the pump.

“An update with the vehicle, the fuel tank pump internal in the tank arrived last week and did not fix the concern.

Given our responsibility in this outcome we went a bit further and had the high-pressure pump tested by a Diesel specialist, the pump tested ok.

Reviewing out findings thus far we now believe the issue may lie internal in the engine.

We have confirmed the crank RPM signal is being received by ECU along with the intake cam position sensor.

Fuel supply and pressure has been confirmed as ok.

An observation after attempting to start this vehicle multiple time is combustion pressure is getting back into the intake.

The next step we need to do it remove the timing covers then if the timing is ok the valve cover to inspect the cylinder head camshafts/valves.”

Not being mechanical I cannot tell if this is the right way to go. Any suggestions please?

Sounds logical, however have they placed the car on a diagnostic machine to see if there are any codes being thrown?

Well its all looking very desperate. The latest message from the dealer is as follows.

"With the engine camshaft cover off we have found the engine lifters have broken internally and are dislodged from the values.

This suggests the internal of the engine has failed and the cause of the sudden stopping."

Yes the wording is less than clear, but I am guessing this is the death of the engine?
The car is like brand new and has always run very well, been serviced on time etc. I am feeling very depressed about the whole thing. Any thoughts anyone…please?

That’s nowhere near the English I can understand but if the head is completely messed up and they think the bottom end is no better it certainly is dead now.

Did they figure out what broke and why?

I know, the email is unintelligible and its from the Service Manager! All they know so far is that the lifters are broken and they “suspect” there is other engine damage. Unfortunately I am not at all technically minded and I’m relying on “experts”. I am on a pension now so cannot afford to throw money at the problem, but I don’t know how far to go to see if the engine can be saved.I guess it would have to come out of the car and be stripped down, with multiple hours of labour.

I wonder if the cam belt has slipped a tooth or even broken?

I now have the invoice with the “work” they carried out. The car has gone to an engine specialist.

Broken rocker arm is very different to what I was originally told. As to what caused it???

Here is the report 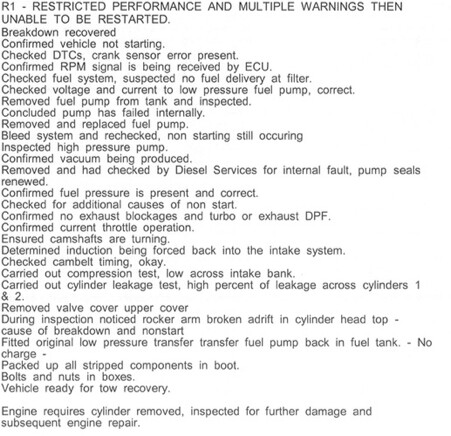 Nothing you could have done to prevent that. Why does it happen to some cars and not others? Bad luck I guess. So it sounds like they’ll be removing the cylinder head and making a decision of how to move forward from there?

Thanks, I know, why some and not others? Yes I am guessing its time to look at the cylinders(s). I have a couple of replacement secondhand engines lined, but hope we don’t have to go down that road. I have a 1995 XJ6 and a 2005 XJ8, both been trouble free and both with reasonable miles on them. The XF engine is hardly run in.