XJ needs to be moved after 20 years... help please

Pretty much been my experience too: I finally had to give up and just buy a whole new radiator for my RV, because no shops around can really do a recore.

Curious, what engine in the RV

It’s the venerable 460. Nothing spectacular, hp-wise, but massive torques.

I suppose the easy fix is to just turn the key every other week with the transmission in gear. It will run the pump and build up pressure. But it is a little odd.

**
It’s not odd, Max - it is plain wrong. The pump should never be ‘dry’ as long as there is petrol in the tanks.

There is a quirky possibility. The pump delivers fuel to the fuel rail via the non-return valve; when the pump stops, the pressure in the rail reverses the valves position - blocking the fuel from the rail to retain rail pressure. At that stage, the valve opens a passage to the return hose - to ‘vent the pump’, as the book says. I never considered that seriously essential - I assumed fuel would still be filling the pump from the tanks. But I could be wrong?

No, the pump shouldn’t be running dry in any way and I can’t see how. Even if there was a leak. I don’t think there’s a problem and if there was it wouldn’t be the pump that’s faulty.

A thought came to mind. The pump shoud nt be dry? Teh tank feeds the pump by gravity. It has to be wet!!!

But, perhpas it has an air bubble. And, the disconnect bleeds the air off. Teh prime is extraneous.

And, just try a boost. Add air under pressure to the tank, via the fillller capp. A form of prime, I borrpwed that from a diesel guy.

Oddiotoes in the world exst. Like the screech in my hearing aid the other day, i drove my Jeept deposit my vote. awful apparently my hearing aid was spicking up an errant signal!!!

It’s been 2 weeks. The car has been sitting. I think she is much happier with fresh coolant and the floor is coolant free for now… That makes me happy!

After over 1 year the hood is finally back on. For some reason it looks like it’s lined up nicely but it is not closing well. I have to hold the hood handle in the open position to get the pins to go in. Ill have to figure this out but for now I am happy the thing finally looks like a car again. One of the rubber bumper side parts has broken out. The screw fixture ripped out of the rubber. I will see if I can get a good one of the parts car.

The way I see this could happen is if the pin id too far towards the latch and doesn’t hit it on the slope, or the entire contraption isn’t greased well enough.

actually let me try that. since the engine bay was painted there is no greace on that side of the sandwich…

All the sliding surfaces have to be greased, also the seating surface, it won’t look so good but the paint will wear either way.

Mine latches nicely. I did some work to make sre the pin and the latch were aligned. A bit of tape over the latch. a blob of grease on the pin. Lower the bonnet til the pis just tuch the tape. Alignw ith a gentle tap with a rubber mallett.

Teh pins screw in. teh depth must be just right. that part is oure trial and error.

lastly, I give them a dab/ usually at oil change time

And I squirt some pil on the hinge pins. whether ti reaches and works, only a guess.

The screw fixture ripped out of the rubber. I will see if I can get a good one of the parts car.

That easily / always happens. I’m glad you don’t have any bigger ”issues” now.

Ps. I’m in Germany again, I keep coming back every week now.

I have to hold the hood handle in the open position to get the pins to go in.

So I had a friend help me install the hood because it is quite big and awkward job for one person. We had the side of the wings taped to prevent possible scratches. So we lined it and the fit looks pretty good to me. I never dared to just let the bonnet fall and see what happens. so if I just press it down with my hand I can only get it in my buddy pulls the handle and then it will slide in. Once it is half way in release the handle and press the bonnet down shut. the right side is worse than the left. But I will play with it some more. 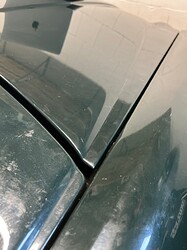 The correct way to close the XJ6 bonnet is to stand in front of the car and with one hand place it mid point in the bonnet and push it down. The weight should be sufficient to latch it closed.

I do not have the struts installed so there would be more weight coming down. I figured it would be good to get everything aligned before installing them.

The correct way to close the XJ6 bonnet is to stand in front of the car and with one hand place it mid point in the bonnet and push it down.

That’s also what I do.
I have no struts.

I have no struts.

You have the spring version then

Yes.
They omitted the springs when the added the struts? Makes sense.

They omitted the springs when the added the struts? Makes sense.

Yes. I have no springs. So the bonnet would free fall now if I let it go. The parts car had the spring version.

A8 in Stuttgart, drop by!

I slam the bonnet much harder than any other car, needs at least 30 cm of travel and full force, push in the middle. That or stand at the front, bonnet fully open, and lift up on the grille sharply. You know that your alignment is correct and you know that the pins will go into the latch. You didn’t change anything about the latches, if it touches on the inclined parts it’ll go in.