So my xj12/81 that I got a few months ago doesn’t ride very well. The front end doesn’t seem to soak any bumps but there isn’t any noise.

I thought I just needed shocks but I don’t wanna change shocks and get no change.

Couple things to note is that the car has been lowered i n the front by the previous owner, cut coil on both sides. That’s what he told me. And the rear sls suspension has been looped off but I don’t have an issue with the way the rear handle.

I’ve had a car with cut springs before but it rode great. I raised that car a tad with spring spacers but there’s not that much space between the coils in the front on the xj81

Now I think best solution would be to find good springs and new shocks and put those on there but then the front will sit higher then the rear which has sls disconnected. If I could just firm up the front that’d satisfy me for now.I think. instead of new springs and shocks front and coil conversion in rear which is something I can’t do at the moment

I’m gonna put a pictures up.
Another thing I think the passenger side sits a bit lower then driver side 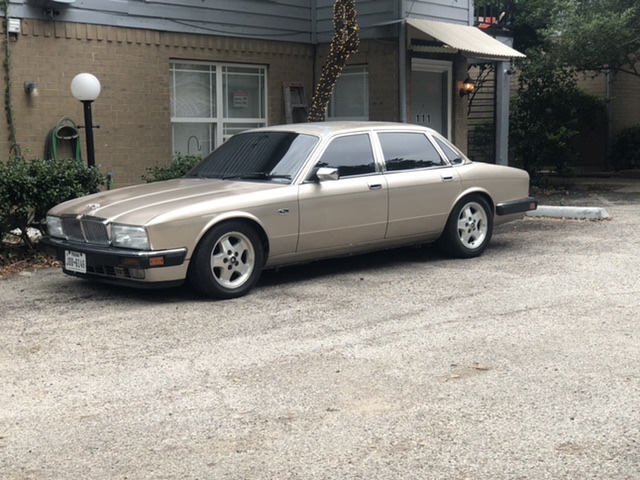 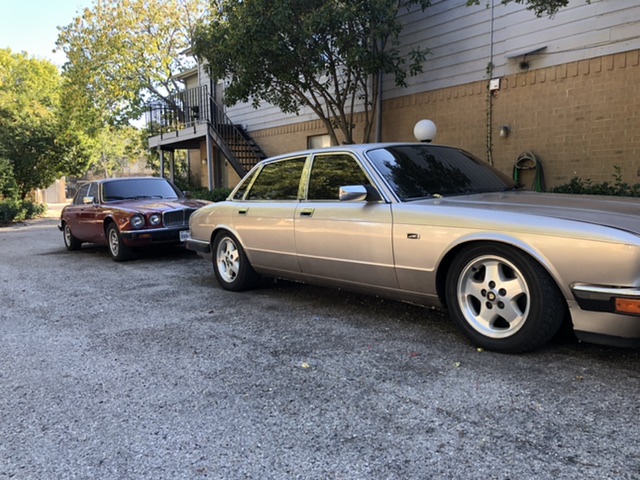 That’s what happens when the Jag is ‘improved’ te company didn’t spend years having Norm Dewis fine tune the suspension for some backyard hack to change it.
OK they didn’t do to well with the SLS but if you take the springs and shocks back to factory (remove the SLS springs and replace with the correct NON SLS springs and bushes/isolators) I think you will find the ride and handling more than satisfactory.

I understand that’s the correct way to do it. I’m wanting to know if there’s a way to firm/stiffen up the front. As that’s something I maybe able to do rn. The conversion needs to be done but I can’t do that rn since I daily drive the car and I need more time

There is a whole lot of things going on all at once in a car’s front suspension. It’s designed to be able to “soak up bumps”, but when it starts to age and then you modifying it that’s when you run into problems.

Shock absorbers, road springs, and bushings all work together. Generally speaking cutting road springs is not a very good idea. They are designed to have a certain compression rate and removing a coil or two changes more than just the height. People are tempted to slam their car down by doing that but don’t expect a “Jaguar” ride anymore.

I know you’re looking for a quick fix so I’d replace the two front shocks first. If that doesn’t fix your problem you can have springs designed and made to a lower height than stock, but the ride is still going to be a bit harder. Normally bushing will affect overall handling more than smoothness over bumps. But the bottom line is until you get in there and see what’s been hacked you won’t know what you’re dealing with.

Robin is right, Jaguar Cars went to a lot of trouble designing the suspension. Looks like a beautiful car and well worth the trouble of fixing the ride.

Ok I guess I will start with the shocks.

Last time I was under there I looked at the suspension and all the rubber components looked great or recently replaced. Ball joint bushes. Sway bars bushes etc. so I think it’s just the shocks and springs causing my issue but I wanted to see what others have to say.

Hey Phillip. Do you know if that will work on the xj40/81? Is that the one I’d put in my car instead of regular shocks?

That one would not work as the top of the shock for the Jag has a pin not an eye.

Do you know if that will work on the xj40/81? Is that the one I’d put in my car instead of regular shocks?

You will need to go to their web site and find the one that will work. Or someone else’s web site. Good luck,
Phillip

review, (and don’t forget that XJ81 is one heavy beast)

Load specs in description inaccurate, put 300lbs on shocks and bottomed them out on the max setting. Other than that the description is accurate. Have to buy another set to double up so it can hold the weight.

Have you changed the upper shock absorber isolators, where the shock passes through the body? That is the main wear component that will cause bump bang issues. They need replacing far more often than the shocks, especially on the extra beefy 12 cylinder.

Well I’ve owned 3 xj40 /xj300 v12
The front bushings and links, shocks and all the rest might last 50,000 miles
The front end is WAY to heavy from day one!
By lowering the front end it’s worse
Once you put it up on the lift you will see the destruction
If it was me
Bring it back to stock spec and replace
Upper and lower bishes
Sway bar bushes
Shocks
Inner and outer bearings
Tie rod ends yes they stretch and get weak on the threads as well
Do the above and it will transform the car
Good luck!
Gtjoey1414

You probably have the wrong tyres.

these are correct https://www.longstonetyres.co.uk/catalog/product/view/id/5954/category/7182 i think