200 Kpa is around 29 psi, Niels? Which is below the 36 psi spec for a stationary engine - but in the ball park for a running engine…

Engine rpms is regulated by the amount of air passing the throttle butterfly; when you say ‘happen nothing’ when you push on the gas pedal - do you actually mean nothing(!) at all happens?

Theoretical, this will only occur if the pedal is not moving the throttle butterfly. Or even more hypothetical; the AFM flap is stuck. If ‘something’ happens (what?); you may have have a vacuum leak, or something interesting. What are your idle rpms?

Fumbling in the dark; have you checked engine vacuum at idle? One vacuum leak test; remove air filter and gently prod the AFM flap - engine idling. With an air leak the engine idle will increase; the larger the leak the more idle increase - to be further pursued. The normal reaction to fractional movement of the AFM flap, mixture being correct; engine will instantly stutter…

Opening the throttle for more air; the engine gets fuel ??? only if the computer get the order from the throttle switch (YES ?)
I found a big vacuum leak there are difficulty to repair
I will keep you informed
Niels

I have the throttle switch of and I can see that I not have understand how this is function. So l will start with how the problem start.
The car could not start and there was no spark I had that problem repeatedly and the solution was always a new amplifier so this time I change both the pickup module and the amplifier. Now I can start the engine and it runs perfect idle but when I pull on the gas pedal do there happen nothing I have spark and gas pressure on
200 Kpa
Hope that give you some new input
Niels

Hello Neils - hopefully this will apply to your car - the Throttle Position Switch (TPS) is a potentiometer that provides a signal to the ECU - this signal advises the position of the throttle to the ECU - the ECU will then signal the fuel rate increase (or decrease) as needed for the RPM changes - check the TPS with an OHM meter (make sure that the battery is disconnected) to verify the there is a resistance change during the operation of the switch - if no change, then the ECU will not change the RPM of the engine - check to see that there are good connections at the TPS for the wires - hope this helps you - Tex Terry, II - 1991 XJS V12 Classic Coupe, 1986 XJS V12 Coupe - sent 9/7/2020 2054hrs. EDT USA.

Opening the throttle for more air; the engine gets fuel ??? only if the computer get the order from the throttle switch (YES ?)

**
No, Niels - here is no ‘throttle switch’ with such a function on the 6 cylinder, Niels - or a throttle position sensor. A full load switching is however incorporated to fatten mixture under heavy loads - playing no part in general fueling…

The ECU gets the fueling signal from ign amp via coil neg - fueling/ECU obviously works since the engine idles. Also, the ign amp makes and breaks the coil’s ground connection triggered by the pick-up coil in the distributor - which is driven by the engine.

When you open the throttle, air is drawn through the AFM, deflecting the AFM flap - which tells the ECU to increase fueling, to maintain correct fuel mixture. With more fuel; engine develops more power - which raises rpms.

Where did you find the big vacuum leak?? It may explains something that to me is completely inexplicable…

In theory; a large air leak, completely bypassing the throttle, may cause non-reaction to throttle movement - the engine simply idles on the air leak…so…?

Removing the air filter and watching the AFM flap; as throttle is opened, the flap moves in response to increased air flow. No flap movement means air is not going through the AFM/throttle.

Is the AFM connected? Eliminate all air leaks. Odd…
The switches should play any part in what you describe. You say that nothing is happening, does that mean that it just keeps on idling whatever you do?
David

Hello Niels - I made reference to the two following wiring diagram pages, from the service manual, when I suggested the item to test - item number 310 listed as Throttle potentionmeter - 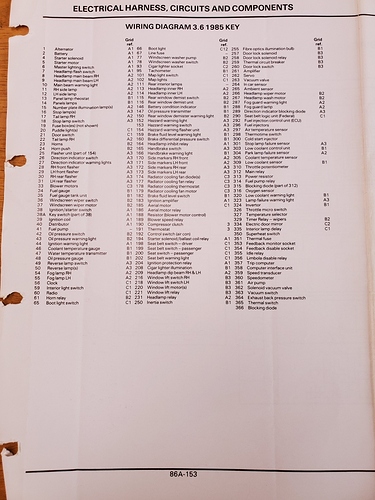 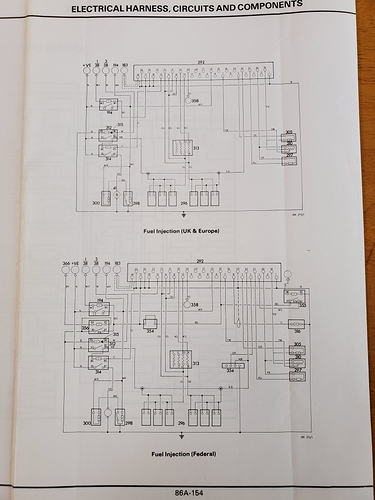 The throttle sensor on a 1985 V12 is a potentiometer, while on a pre-1980 model it was actually a switch. Can we presume the 6-banger EFI evolved in much the same way and about the same time?

As per the two wiring diagram pages I posted, from the service manual, the 1985 3.6L is fitted with a throttle potentiometer that is used to provide a signal to the fuel injection control unit (ECU) - I am wondering if the 3.6L fitted to the XJ6 may be wired different than the 3.6L fitted to the XJS (the wiring diagrams I provided are from my service manual for an XJS) - hope this did not cause any confusion as I was of the understanding that the injection controls were the same for both types vehicles - Tex Terry, II - 1991 XJS V12 Classic Coupe, 1986 XJS V12 Coupe - sent 9/8/2020 1215hrs. EDT USA.

On the european specs. injected IL6 (no catalytic converter) the throttle sensor is just an on/off switch.

There is a lot of threads on the topic. Its function is to cut-off the fuel injection when the throttle is closed AND that the engine revs above 1,400 rpm to improve engine brake, fuel consumption and supress backfiring

Thus under 1,400 rpm it has absolutely no effect, but it cause the fuel to be cut off if the switch is closed and the engine revs above this limit. If the condition is maintened the engine will go off until it sloxs down to about 1,100 rpm then accelerate up to 1,400 and so on.

Again this goes for european models, it is effectively a potentiometer sending an analog information to the ECU on catalyzed engines

The throttle sensor on a 1985 V12 is a potentiometer, while on a pre-1980 model it was actually a switch. Can we presume the 6-banger EFI evolved in much the same way and about the same time?

Not the old 4.2 (XK engine family) as used in an '85 XJ6. It became fuel injected in 1978-1979 and the system really didn’t change until end of production in '87. There is no TPS or potentiometer such as found on the HE V12. Just throttle switches…the type and function varying by market.

The 3.6 as used in the XJS (AJ6 engine family) would be a different matter

Just for fun check the ducting between the throttle body and the Air Flow Meter. Tight? No leaks?

When you open the throttle, air is drawn through the AFM, deflecting the AFM flap - which tells the ECU to increase fueling, to maintain correct fuel mixture. With more fuel; engine develops more power - which raises rpms.