The cold start injector/valve on my 1987 SIII is leaking, and there doesn’t seem to be any availability of an actual Jaguar replacement part. Is there a substitute from another manufacturer that people have used successfully that is actually available?

Thanks for any help.

It’s a bosch part; maybe you can find something close? (In displacement of course). Did you try cleaning?

Haven’t pulled it out, gas is bubbling out of the top. The Bosch equivalent doesn’t seem to be available either, I had looked for both online from every source I could try.

Oh, it’s leaking between plastic and metal! Then all you can do is find a used one; they’ll pop up (I have two clogged ones… not much good either)…

Thanks David, will keep my eyes open and search engine running!

I have substituted many parts like this with good results when the original is too expensive or NLA.

The Pre HE V12 used 2 x CSIs.I found that 1980s Volvos used a similar part. The angle of the hose was slightly different but slotting the flange mount holes let it move enough to fit.

Thanks, will see if I can locate one!

Peter,
The Jaguar part number for the Cold Start Injector is EAC1383. They show up on eBay from time to time. If you get a used one on eBay make sure that the Seller has tested it to make sure that it works before you buy it.

Has anyone tried the CJ50 version? Looks the same, and is obtainable. I may give it a shot as a first try.

**
What is actually the difference between the ordinary injector and the cold start one, Peter…?

Apart from the longer ‘on’ time when used, which possibly require higher coil resistance - they all do the same…?

The Bosch system was used on many different cars/engines. I suspect the various CSIs are calibrated a bit differently depending on engine size but I have doubts that it would make much real world difference. No matter which one you use it’ll give a big fat squirt of raw gas.

The engine will start without a CSI, at least in mild weather. Years ago I discovered a broken wire at my CSI, rendering it inoperative. I had no idea; never had a starting problem. But that was in the spring, rather then dead winter, so the CSI wouldn’t have been doing much anyway.

Mine is stuck closed (again) and today, freezing, it took 4 attempts and even produced a misfire. But it did start. So it’ll be fine if the injector was for a lower displacement; if the CJ50 made it into the 7 series, it’ll surely work.

The difference between our ‘main’ injectors and the CSI is that the former is powered through the injector resistor pack - which reduce injector voltage and current. The injectors coil’s resistance is nominally 2,4 ohms and added some 6(?) ohms - reducing current to around 1,5A - or some 18W load…

The resistor’s purpose is described as ‘protecting the ECU in case of a injector short’. However, it may also ensure that the injector is not overheated by the high current due to the low injector coil resistance? About 5A - or a load of some 60W…

The CSI has no external resistor, so only the resistance in the coil restricts current. Bearing in mind that the CSI is meant to operate continuously for up to 8 seconds - while the other injectors are intermittent…

I quite agree with Dough; the difference between injectors is unlikely to be a hill of beans. Theoretically; the same injector may work well on different setups - an ‘ECU’ may control the amount of fuel delivered from a variety of other parameters…

In the case of ‘our’ CSI; one would need and injector;

If the replacement resistance is very different - it may be ‘adjusted’ by adding an in-line resistor to prevent burn-out. Which may allow for using an standard xk - and indeed; a V12 CSI may be used if available…? 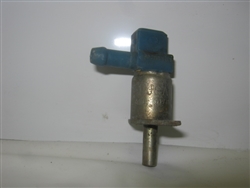 
David is a great guy! when I need hard to find stuff - he’s the first place I go. I can’t say enough good things about David.

Granted it’s not new, but it will work.

I sure like dealing with David on his e mail, he always seems to
help to get the right parts, if you need them.
walter

How would you test it?

Apply fuel and 12v, if it sprays and doesn’t leak it is good, if it drips or is not producing kind of a mist try cleaning it, if it is blocked it is unlikely that you get it working.

I have tested many of the solenoid valves in my Jaguars and parts cars after removing them from the car and using a Mity-Vac vacuum tester and a 12 volt source like a car battery or jumper battery. For the Cold Start Injector (CSI) I connected up my Mity-Vac and a short length of vacuum hose to the nozzle and pumped up the vacuum tester to make sure that with no power applied the CSI that it held about 20 in Hg or so of vacuum without leaking over a period of a few minutes checking for leaks. If there were no leaks then I would apply power momentarily to the two connectors on the CSI to see if the solenoid worked and the valve opened and closed and the vacuum dropped accordingly. When doing this test some of the valves worked as advertised and made a pronounced click when the solenoid activated and opened the valve and the vacuum would drop accordingly. On other CSIs that I tested the solenoid would click when power was applied but there would be no drop in the vacuum indicating that although the solenoid was working there was something blocking the flow through the valve. On other CSIs there would be no click or vacuum drop.

For the CSI that did not work properly I tried soaking them in fuel injector cleaner for extended period of time (weeks?) and/or soaking them in an ultrasonic bath for hours (days?) but in no cases did that ever restore proper operation of failed CSI. So it with my experience with about 10 or so CSIs that I tested (from my Jaguars, my parts cars, and units that I purchased on eBay) that only about half of them worked as they should, and there was nothing that I could do to restore them to proper operation once they failed.

There are other ways to test the CSI and other solenoid valves but I found this to be a safe and effective way to test them for my purposes and avoid the use of flammable liquids. I tested dozens of solenoid valves with my Mity-Vac this way including the Changeover Valves, Fuel Return Valves, cruise control solenoids, climate control solenoids, and even fuel injectors.