About 1 month ago the distributor rotor that had been in car for a long time failed, so there was no spark going to any of the plugs. I replaced the rotor and everything seemed fine. The new rotor just failed today, only one month of use.

Could this be caused by other components, maybe a high resistance lead or plug, distributor cap…? Or is this a result of low quality parts.

In the picture you can see white deposits around the brass. I assume that’s from extranous arcing over the rotor body.
Anybody come across this problem? 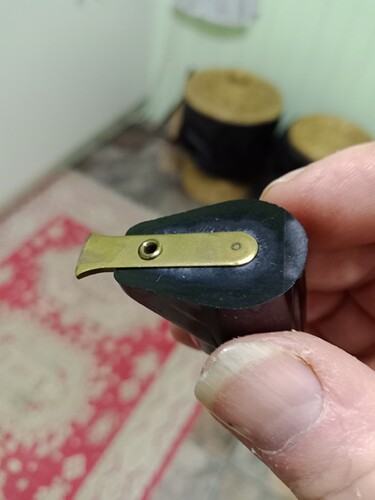 If I recall it mentions rivets being bad, and other details

I have an entire box of used original Lucas rotors, (they came from someone else), and I would probably just use one of them before buying a new one, likely not an option you have

Where did you get the faulty one?

Could this be caused by other components, maybe a high resistance lead or plug, distributor cap…? Or is this a result of low quality parts.

**
The brass strip is connected to the coil’s center lead, Zenit, usually via a spring loaded carbon rod inside, and part of, the dist lid. Not much that can go wrong with the rotor, and no visible damage seen - but if the deposit, or something else, shorts the strip to ground; nothing reaches the plug leads…

is this a result of low quality parts.

As Tony mentioned, the reproduction, black plastic, riveted rotors are a known issue and have left many British cars mysteriously stopped on the side of the road. It’s been going on for years and yet those things are still out there. Much of the time there’s no visible sign on the rotor - the cheap black plastic will sometime arc internally through the rivet to the dizzy shaft… Sometimes the rotor will be okay for a few thousand miles before it happens.

I’ve personally seen this issue multiple times and been it’s victim once about 15 years ago. Since then, if I ever come across the evil black-riveted monster in a car I’m working on I replace it immediately even if it hasn’t failed yet because it’s just a matter of time.

There are better alternatives now or find a good used or NOS blue original Lucas rotor. If it’s black and has a rivet avoid it and always carry a spare just in case.

I wonder if those leaky black rotors might be improved. Added insulation in the hole that slips on to the distributpr shaft/ Lquid electrical tape?

been there with a lousy rtor on my old ford projrct. tossed it and cleaned up an ancint original. Much better.

I would say it ain’t worth the trouble to try to fix the bad ones. Also the plastic is the major issue and there’s not much you can do to insulate that completely - it’ll touch the shaft somewhere.

I was working on a Mk3 Triumph Spitfire. One original Lucas tail-light was buggered inside so the owner got a new repro from a Moss distributor. The original Lucas uses a phenolic piece as a wiring insulator - reproduction had the infamous black-plastic instead of the phenolic part. I Installed the repro and when powered up the light circuit fuse kept blowing. I thought maybe I pinched a wire or something, but on careful inspection and much head-scratching and testing I found that the black-plastic was conductive! Dead short to ground! So I fixed the original Lucas part with a new bayonet socket, installed it and all was well.

Moral of the story is be wary of reproduction electrical parts that have that mysterious black plastic in any essential system.

but on careful inspection and much head-scratching and testing I found that the black-plastic was conductive!

Likely because they used, as a low-cost alternative, carbon black to intensify or create the black color of the plastic.

Yes, carbon has a negative coefficient of resistivity, which means the hotter it gets the more conductive it becomes , so too battery electrolyte.

Thanks for the replies, getting new old stock cap and rotor.