Can anybody tell me what each of these sensors are for? I just ordered a new engine wiring harness and some of these are plugged and some the wires fell off! LOL

Green is the main oil pressure sensor, Orange and Blue appear to be in the oil gallery to the main bearings, need a clearer shot of poiple
Just looks like somebody went overboard on the op sensors?

I’m thinking there is one sensor for the oil pressure gauge and one for the light upon start up.
Green = Gauge
Blue = Start Up
Would purple be the coolant temperature sensor?

I would expect the coolant sensor to be somewhere near the top of the engine?

Thanks Paul, I’ll have to have a look and see if my NZ assembled S11 has one of those

Attached is a picture of the 4.2L XK engine from my 1987 XJ6 parts car on my engine test stand after I cleaned it up and got it ready to install in my 1984 XJ6 Vanden Plas last year. The low oil pressure warning light sensor switch is circled in purple and the aftermarket oil pressure gauge sensor is circled in green. None of the several Series III XJ6 4.2L XK engines that I have worked on have ever had those other two oil galley sensors shown in the original post. I have no idea what they are used for. 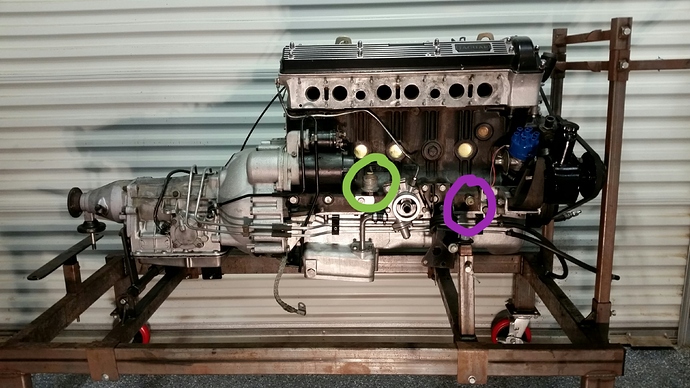 The more rudimentary Series 1 gets by with just the OP sensor - would have thought similarly for the Series 2, also a fairly agricultural vehicle? Paul.

Can anybody tell me what each of these sensors are for?

I just ordered a new engine wiring harness and some of these are plugged and some the wires fell off! LOL

I agree that the OP gauge sender (100 PSI) is in the green circle, and the normally closed (NC) low oil pressure idiot light switch is circled in purple. The two devices at rear (orange, blue) are IMO normally open (NO) switches that close when oil pressure is present in the gallery. In 1973, Jaguar introduced EGR, which caused the engine to run on after switching the ignition off. One of these switches was connected so as to ground a solenoid that equalized vacuum across the Strangleberg carbies. The hot side of the solenoid was connected to a special ignition switch terminal that provided 12 V if and only if the switch was off. Thus the solenoid was on, preventing fuel from entering the manifold, only if the ignition was off AND there was oil pressure–i.e., engine running when it wasn’t suppose to be. Pure Jaguar genius.

The above only requires one of these switches…I don’t know why there are two. An oil temperature sensor could be fitted into these 1/2-20 tapped holes as well, but the two devices at front look identical, and they look like the NO switch found on the 73. IMHO.

Robin,
Thanks. Jaguar made many changes over the years to the XK engine and my knowledge is limited to the Jaguars that I have owned and worked on. It seems that info from someone familiar with the Series II XJ6 engines is needed here to help out Brian.

One of them cuts off power to the fuel pumps until there is oil pressure, for obvious reasons.

Can anybody tell me what each of these sensors are for? I just ordered a new engine wiring harness and some of these are plugged and some the wires fell off! LOL

**
Two oil pressure sensors were specific for the S2, Brian - additional to the gauge and low pressure switches relevant to all models…

One, as Robert describes, was for the anti-run on valve - allowing vacuum into the carbs with the engine spinning down with igh to ‘off’. The other, mentioned by Eric, is the fuel safety switch - fuel relay will not engage the pump(s) with ign ‘on’ unless the engine is running. Function is a safety measure - bypassed with ign to ‘crank’.

Neither is fitted to FI versions, the fuel safety is fitted to all carb versions - the anti-run on is fitted to carbs with the specific carb vacuum connection. The unused apertures may be present but blanked off - and following usual Jaguar practice; the wiring may still be in place, but not used…

Ie; in the latter case - no harm is done connecting the sensors…

Thank you everyone. Over the years people have done things to these cars to make them function.
In order to put the car right you have to know the baseline of where it all started. Some things are important and some things can be removed as I grow to understand the workings of all of them. Hopefully when I get the new engine harness your information will make it easier to understand and install. The car hasn’t ran in over 12 years so I’m excited to just be able to get it to move around on its own in the driveway!

I see what you did there: Mom’d be soooo proud of you!

Hey Paul! Could you please tell me the part number for the sensor circled green?

Andy,
Welcome to Jag-Lovers!
The Jaguar part number for the Series III XJ6 (4.2L XK engine) Oil Pressure Gauge Transmitter, shown circled in green in my picture in this string, is C46272. The engine shown in the picture had an aftermarket Transmitter. The OEM Lucas ones looked more like a flattened cylinder and did not have a conical top.
I have no idea where in the world you are located but any of the Jaguar parts suppliers world wide should have them available.

Thank you very much for the answer!

If that gear reduction starter is new to you and the car, I can’t recommend enough to pull it off and bench test. I’m 3 for 3 receiving dead GR starters (on 2 different cars), one worked on the bench, made a half arse attempt to turn, and then died, the other two were DOA. The vendor took them back and claimed they were struggling through a bad batch.

It weighs a ton, but ‘ol ironsides is a reliable unit.

Mr.Paul, could you please help me one more time? Do you know what is on this picture, it says “switch” on it, and it is located behind the transmission filter, I can’t find it in any books or catalogs 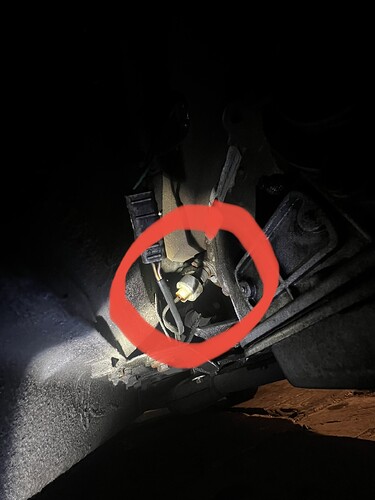