Now the jets stick down when I use the choke and won’t pop back up.

There can be a couple of reasons for this

a) some fault in the way you have built your choke mechanism, such as a loose fastener
(I had this)

I cant remember whether the HS8 have a spring that pushes upward on the jet from below like an HD8. I replaced the HD8 Jet springs on one of my vehicles with stronger SS springs

I corresponded with a guy that was very experienced with all sorts of Jags, and he noted that sticking Jets on HS8 manual choke setups was a known issue

I have had this happen with a new jet on my e type (HD8). The top edge of the jet had a very small burr on it which made it stick in the jet bearing and not come back up on releasing the choke. Would be surprised if you had two like this, but not impossible. My conclusion was the jet had taken a small knock during handling before I got it. Was able to carefully dress the jet with a fine file to remove the burr. Was hard to see the damage but you could feel it.

Hi Andrew, I put a helper spring in when I changed over from the AED to a manual choke on my HS8’s. Takes a bit more to pull the choke out but I know for sure that the jet “bottoms” to the warm driving position when I push the choke back in. Paul.

I spoke to Midel twice today. Unhelpful would politely describe the interaction.

Tony it’s entirely possible I put them together wrong, but I did do one at a time, using the complete one as a template. Yes they do have the “baby bouncinet” spring arrangement, which looks suss to me.

Dave I’ll have a look for burrs.

Paul can you send me a photo of your helper arrangement?

Now if I can just sort out all the rattling timberwork in the roof… anyone know what’s inside the factory sunroof?

I thought about centralizing jets but not sure if they can be/ have to be centralized, bent needle or a swollen gasket or a weak return spring - does it happen without the needle in place? Can anything be lubricated?

Tony it’s entirely possible I put them together wrong, but I did do one at a time, using the complete one as a template. Yes they do have the “baby bouncinet” spring arrangement, which looks suss to me.

Not really a question of “putting it together wrong” as the HS8 doesnt actually have a manual choke, its just they can easily be adapted to accept one

It helps to have an assistant operate the choke lever while you observe the movement of parts, this can be done without taking anything apart (initially)

Its usually only one that is sticking

I think my adaption is different to yours, but like Paul, I have a helper spring to assist return of the Jets to their original set height

I have confidence you will sort it out fairly easily

on mine, one of the fasteners on the levers that run of the rod that connects the choke levers was just not quite tight enough. I spotted it in 30 seconds, as you could see one moving and the other not, I think they are Whitworth size. I have a set of small Whitworth spanners

Thinking about it a little more, a couple of things

I presume you used new jet assemblies, as you mentioned Midel

The reason I say this is I found one of my HS8s had a sticky jet mechanism, and that I would need to buy a new one (that is for the triple set on a 420G manifold, I presently have an XJ6 motor and inlet, twin carbs in my 420G)

In addition, as far as I remember, the Jets wont return back to the initial position without a helper spring, they are not designed to, and they dont have a spring pushing the Jet underneath like HD8

I will send tonight.

It definitely changed depending on market and over time. For example, I have an 3.54 auto from France: that’s the standard ratio but you could have ordered different ratios. I’ll try to out an overdrive manual in there and hope that 3.54 is high enough as it has more than enough power. 3.77 is listed as the standard for o/d cars in my manuals. I think his transmission is direct in 4th and overdriven in 5th, so I asked for the direct ratio.

Andrew. My manual choke only works the rear carb. The bowden cable is mounted through a ferrule on the carb body. Choke pulls on the mixture arm and the link pulls on the idle lever. The helper is mounted on top working opposed to the choke cable action. Perhaps you could do similar - expect yours would work both carbs. I think Tony’s works both from memory. In the picture the choke is out about 1.5cm - pulled away from the bottom of the mixture screw and both the idle screws per link rod. 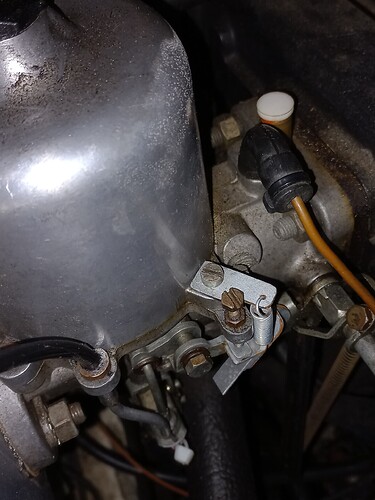 I can’t recall how well mine pulled from low revs in o\d, but it just wouldn’t pull high speeds; overgeared. IIRC it was close to 30mph\1000rpm, so 90mph was at max torque. If you took it past that in top and then engaged o\d it would slow down.

I don’t have my manuals with me at the moment. The workshop manual quotes optional final drive ratios in the final drive section.

My 4.2 auto hasn’t seen 4000 rpm yet but it goes pretty well and can definitely take another gear. Plus with the auto starting in second gear is bearable so to me and for my taste, it’s geared too low at 3.54.

30 mph/1000 rpm is low but I just can’t see how that is dramatically overgeared, then again top gear is the intended performance gear (direct, less losses) and overdrive is more to reduce thirst and noise. I‘d like to turn 2000 rpm at 60 like modern cars do!

Andrew. My manual choke only works the rear carb. The bowden cable is mounted through a ferrule on the carb body. Choke pulls on the mixture arm and the link pulls on the idle lever. The helper is mounted on top working opposed to the choke cable action. Perhaps you could do similar - expect yours would work both carbs. I think Tony’s works both from memory. In the picture the choke is out about 1.5cm - pulled away from the bottom of the mixture screw and both the idle screws per link rod.

IMO, a single choke operation gives an advantage in reliability

(having experienced this when mine malfunctioned), in that the vehicle will start and run like that, just wont perform as well while choke is in use, which is somewhat ambient temp & load related, but could be 30secs to 3min, or sometimes longer

With the dual choke setup, if a fault develops its more likely the Jets can get stuck in such a way as the vehicle runs very poorly, needing roadside attention

If you are a perfectionist, a properly setup dual system may be desired
I really like the way mine works during warmup period

I went through this dilemma with my tri-carb HS8 setup
2 is much easier to do, as you can use a standard Jag V12 choke cable

Slightly bent needles. Decades ago on an sU in an Austin!!!