This specifically relates to upgrading the DAC2534 rheostat on the XJs3; however, it probably works for some other models and rheostat dimmers as well.

When I upgraded the instrument lamps to LED, I sized the luminosity of the bulbs to be a bit brighter than I would normally use. My intention was to DIY a PWM controller to drop-in replace the DAC2534. I know some folks just bypass the rheostat, but I wanted it to work like the original, only better. After looking around the net for components, I discovered that what I wanted to build already existed and would fit with only a little tweaking. I took the lazy path.

I used a Cole-Hersee (Littelfuse) instrument panel dimmer that’s intended for large trucks/lorries. They are available from many different sources and price varies a bit. I found one on eBay for US$25.

By comparing the original DAC2534 and it’s mount hardware to my Cole-Hersee mod, all I did was fabricate an anti-rotation bracket from a scrap of steel strapping and change the connectors on the Cole-Hersee. The bushing of the Cole-Hersee is a little smaller than the DAC2534. A washer + the anti-rotation bracket tighten down snugly on the center console. I have yet find a good solution to attaching the XJ6s3 knob with the bizarre shaft. My temporary hack is a wad of masking tape inside the knob and just press fit it onto the Cole-Hersee D-shaft. Someday I will get around to making that correct. Someday. 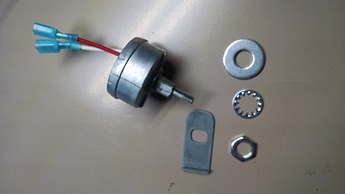 Do you have a part number for the Cole-Hersee dimmer?

I don’t see FAQs on the JL site anymore

Littelfuse acquired Cole-Hersee.
https://www.littelfuse.com/products/switches/rotary-switches/electronic-dimmer-switches.aspx
I think all of the part numbers are basically the same. The one I got is 74600-02; I cut off the Packard connector. IMHO find the best deal.