I got my 1984 XJS out from winter hibernation to find the heater fans didn’t work in auto or low modes. High & defrost fan speeds work OK. It is the Delanair Mk 11 with the resistor pack & relays. I’m thinking the resistor pack or connections to it are the problem as a relay failure would only cause one speed to be lost.
Any suggestions or pointers?

Could be more than one relay failure.

Mine failed, as do many apparently.

I renewed and relocated the relays outside the fan box and re-soldered (actually reflowed) the tin on the circuit board. No failure since.

Kirbert: your book was a great help, and I really mean it.

Jim: getting the fans out and back in is facilitated by playing with the opening and closing of the flaps (there is a flap on top of the fan that somehow makes it difficult to get it out and back in). By moving the bottom flap, the upper also moves, helping the process.

I don’t think I need to take the fans out (thank goodness) as they work
in both the high & defrost positions, but not low & auto. It is
possible 2 relays have failed, but a single relay failure would not stop
the auto & low fan positions from working & I believe that a failure in
the resistor pack would (all sections of the resistor pack are used in
series in the auto mode).

Damn, you said it: Delanair MkII, not III. Yes, indeed, sorry you are right. I am talking about the latter hot diode.

Jim,
My former 1984 and 1987 Series III XJ6s also had the Delanair MK II and I returned both of their inoperative climate control systems to full operation after them not working for a few years due to engine changes. One of them had a bad relay (C46179) which I removed, tested, cleaned the contacts, and returned to proper function. This one “relay” actually has four relays inside (low speed, medium 1 speed, medium 2 speed, and high speed) and it is possible to have one or more of them fail while the others work properly. From what you posted it sounds like that might be your problem. The attached pictures show that relay in my former 1984 XJ6 VdP with and without the wires connected. 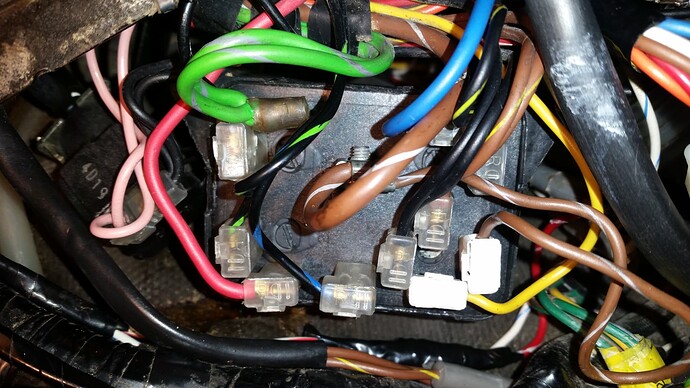 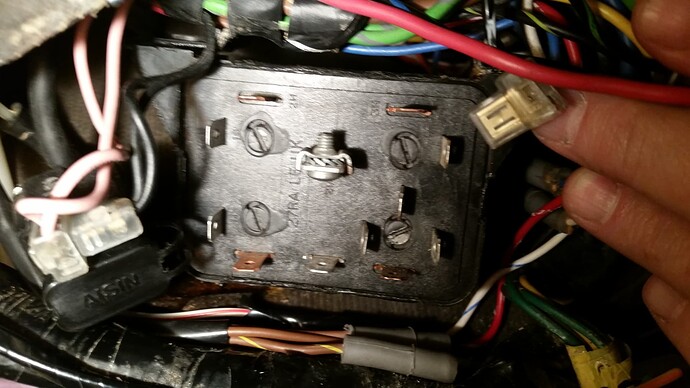 If I were you I would remove the relay from the car remove the cover for a visual inspection for burnt contacts and then test it to see it functions properly. If that is not the source of your problem then it might be the Mode Selector Switches on the right side of the dash. I have had them fail before and it is a lot more complicated to disassemble the dash to remove and replace one of their four microswitches but I have successfully done that as well.
The most common failure mode in the Delanair MK II appears to be the A/C amplifier (C45402) and that could also cause your problem. I had 5 or more of those fail in my 2 running XJ6s and/ or 3 XJ6 parts cars.
If I were you I would start troubleshooting the relay, then the A/C amplifier. My patient methodical trouble shooting is what solved my Delanair MK II issues. There are probably hundreds of post in the Jag-Lovers archives about Delanair MK II issues and especially the A/C amplifier and many by me.

Jim,
What happens when you turn the temperature selector knob on the dash slowly from full hot to full cool with the mode selector or in “AUTO” and with the engine fully warmed up?
Do you hear the servos moving? Does the air coming out of the vents change from hot to cool?

It is
possible 2 relays have failed, but a single relay failure would not stop
the auto & low fan positions from working & I believe that a failure in
the resistor pack would

All true. But the relay pack (It’s a single pack of 4 relays) is dead simple to get to and test and you can replace one or all four relays for $5 each in an hour. The resistor pack, OTOH, will have you cussing all weekend trying to get it out and then back in. And I’m betting your problem isn’t in the resistor pack.

Suggest you drill a hole, BTW. You’ll know what I mean when you get there. There’s one screw you can’t get to. Drill a hole in a steel panel so you can stick a screwdriver through the hole to get to that screw. That’ll save you many frustrating hours getting that resistor pack out. All the more frustrating when you find there’s nothing wrong with it.

As I turn the temperature selector switch on the dashboard, I can hear a
click from a relay & when I first turned on the ignition, I could hear
the servo move the flaps. I deduced that this meant the amplifier & the
servo is working & at least 1 relay is operating.

You & Kirby are right that the relay pack is much easier to get to then
the resistor pack. 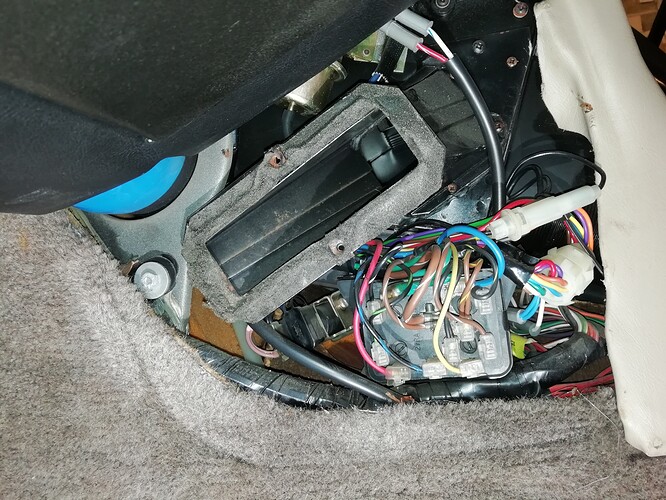 Actually, you can check the fan resistor values by pulling off the
connectors on the relay pack. The values are Green to Blue 0.85 ohm,
Green to Yellow 1.275 ohm & green to Red 2.55 ohm (measured on the wires
not the relay pack).

I used the car again today & with the engine hot, switching the mode
switch from OFF to Low gave a relay click & a whoosh from the vacuum
solenoid, but no fans. So the mode switch appears to be working.
Moving on to auto there was no relay click.

So my plan is to check resistor values as above then the relay pack. If
both appear OK, it could be a microswitch in the mode selector.