Now I have my 1990 V12 drop head running I filled it with petrol yesterday for the first time. Filled it to the automatic cut off so level was several inches from the top. Two to three gallons ran out in front of left rear wheel.
Just before the station was about to call the fire brigade the dribble stoped. There seems to be a breather of some sort about the 3/4 full mark. Cant see anything missing or loose from the trunk with all panelling removed . Any ideas how to fix this “explosive” situation???

I ran into a similar issue also after I removed the charcoal canister and related plumbing (Carbon canister removed issue.

In your case, and assuming you haven’t mucked with the things like I did, I would start by looking at the fuel hose vent line to the carbon canister specifically where the soft fuel hose connects to the hard line return that runs from behind the rear wheel back to the front of the car. 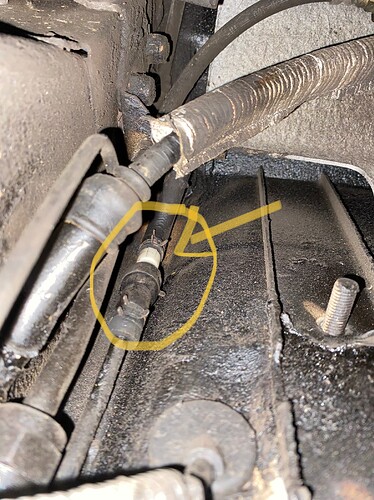 Thanks Jeff, most informative. I have done nothing or modified anything on my recently acquired V12, first I knew of the problem was when I filled up for the first time.
Do I have to remove the big black panel on the photo to get at the joint and other pipes you refer to?? 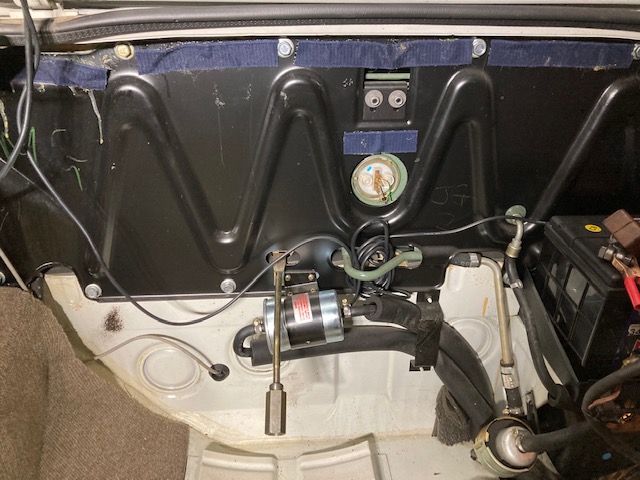 @Roger_Slater - that soft hose to hard line connection is underneath the car behind the vender well.

I bet if you look under the car right where the gas was hitting the pavement and look up, you’ll see it.

Thanks Jeff. Fully understood. It is very cold here at present and the car is in unheated shed so it will be a while before I can get to to it.

Jeff.
You are spot on, found the short stepped hose is split. Have you any idea where to get one. ? Part number I came up with CAC1850 is no recognised.
The split suggests a lot of pressure but how can there be pressure on a fuel tank vent pipe??

@Roger_Slater - not sure of the part number, but if it’s just those hoses that split, you can just take the split hose to you local car place and they can probably cut you the correct size and length of plain old fuel hose pretty easily. It’s probably 5/16", but you’ll want to check that.

The hardest part will be getting access to attach the hose to the pipe further back.

Check the hose clips - probably worm or spring bands - nothing fancy just make sure they provide a good seal on the hose to hard line.

Shoot any pictures you can get, that might help with more exact details.

According to page 2D 09 of my Jaguar XJ-S Parts Catalogue that stepped hose is Jaguar part number CAC7586. It is called both a “Connector” and a “Reducing Hose” and it has different inner and outer diameters on the ends. A search on the Classic Jaguar Parts website shows that the part number CAC7586 was superseded by EBC10152. A search on the internet shows that SNG Barratt and Welsh Enterprises both have that part listed for about $2.25 US and Welsh appears to have it in stock while at SNG Barratt it is a special order part.

This is of interest to me because our 1990 XJ-S convertible recently started spilling a bit of fuel on the ground when I topped off the fuel tank. So I have been keeping the fuel tank between half and 3/4 full until I sorted this out. I will have access to a lift in about two weeks and plan to inspect that stepped hose to see if is also the cause of my fuel leak.

BTW, I suspect that it may be difficult to find a special stepped hose like that. I just added it to my parts “Wish List” pending visual confirmation that the hose is damaged.

Thanks again Paul. True, this stepped hose is not available from any of the auto stores, I will order same from Barratt or Welsh.
I am still baffled as to why the hose splits as there should be no pressure on this tank breather. Where does the pipe forward of the split go to??? 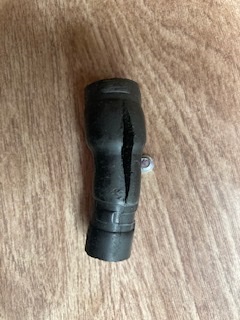 Roger,
No need to be baffled about that hose splitting, it is likely original and 32 years old. Rubber doesn’t last forever. You should inspect all of the hoses in your car, especially the fuel injection hoses, and replace them if they are original. Many an XJ-S engine fire was caused by original fuel injection hoses failing while the engine was running. If they are original you are living on borrowed time.
That hose is part of the fuel vapor recovery system and it will see pressure and vacuum variations while the engine is running and fuel is being used up in the tank or the car is sitting amid temperature changes. That pipe from the stepped hose goes forward beneath the car to the Carbon Canister in the forward area of the left front wheel well.
If you don’t already have one, you should get a copy of the Jaguar Parts Catalogue RTC9900 CA. It has great diagrams, parts listing, and part numbers for all the parts in your car. With it you can easily solve small mysteries like what that hose this is, as well as many others. I have the parts catalogues for all of my Jaguars and they have saved me a lot of time and money over the past 22 years when identifying and shopping for the correct parts. I can’t imagine working on these cars myself without having these Parts Catalogues.

Totally agree on the parts catalog… I was looking at the convertible gas tank, 2D07 which has a slightly different layout. The only reducer I see is the one in the picture I posted, which is really a big hose/small hose with a plastic reducer between them.

Jeff,
I also started out on page 2D 07 of the Parts Catalogue but when I didn’t see what I was looking for I looked at the nearby pages and found page 2D 09 which is listed as “FUEL TANK-CABRIOLET”. I suspect that Jaguar economized on the Parts Catalogue and didn’t include those components on the “FUEL TANK-CONVERTIBLE” page because they were already shown elsewhere. I believe that the component in question (CAC7586 “Connector”) , as well as the other nearby components shown on the Cabriolet page are also correct for the prefacelift Convertible configuration. But I am not certain of that.

Thanks again Paul
I have the bit of hose on the way to me, will fit it before spring as car is cosseted now for winter. Good point about the injection hoses, they will be changed before spring.
I have the Jaguar workshop manual on disc. I find it difficult to locate part numbers as there is such a monster load of info. Even when a part number is found it is often unknown because number has been changed. I have a hard copy parts book in the post, it is probably the part number you suggest, should see it beginning of the week I think that will work better for me.
Thanks again for your sage advice.

Paul
I ordered it from Walsh, three days later it was NLA. Tried Barrat but gave up trying to place order. The search continues.

Looks like Terry’s has it as part of a kit, but not sold separately. 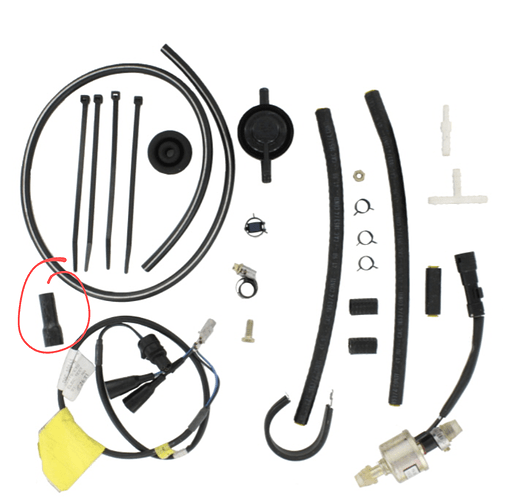 One possibility is Terrys Jag. He doesn’t have just that hose, but has a fuel tank purge kit which contains that hose.

Another option might be to make a reducing hose using a fuel compatible straight connector (like for vacuum connections) of different size ends , and two short lengths of appropriate diameter fuel hose and fuel system hose clamps

Thanks Jay
Complete kit is a bit pricy just to get the elusive bit of pipe but one wonders where the pipe comes from to include it in the kit???

What are the inside diameters on each end and the overall length?

Roger,
Well that is disappointing. I have access to a lift on 21 January and will get a good look at our 1990 XJ-S convertible to see if that hose (CAC7586, EBC10152) is also split on our car as I suspect it is. I was hoping that one of the USA vendors would have this stepped hose available for purchase. I wonder if Terry’s Jaguar would consider selling that stepped hose separately? They obviously have a supplier for that hose for their kit. I wonder if they realize that there might be a market for that hose if they sold it separately.
I will revisit this after 21 January and hopefully a vendor can be found then.
Do you have the inner diameter of that hose, or the outer diameter of the pipes it connects to? Perhaps there are other potential sources for that hose we haven’t considered yet.

Went digging through my old parts and what do you know… Found the hose. The 89 convertible did have all that stuff under there, it’s just not in the PC diagram for convertibles as @Paul_M_Novak and I talked about earlier (2D 07 and 2D 09). 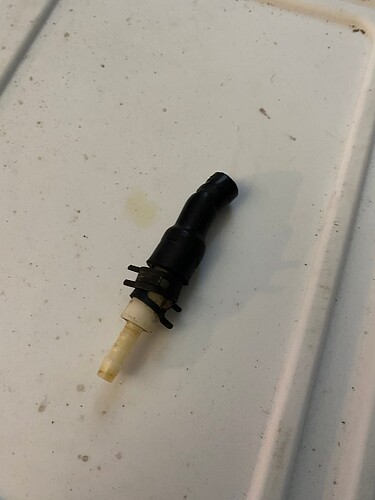