Couldn’t find a clear answer for my problem, hence my question for the Forum.

The Centre Pillar BD.3014 is held by a large “Special Nut” BD.4696 fitted from underneath the dashboard.
My “Special Nut” has been repaired in the past by someone who didn’t quite understand the construction. See picture.

He (she?) brazed a new piece of thread (3/8" UNC or possibly BSW) in the Special Nut, but although I can tighten the Nut, the lower end of the Nut (with the hexagon part) sticks out about 1/2 inch below the steel dashboard section.

As far as I understand the construction, there is a “Special Stud” (not mentioned by Jaguar) consisting of 3/8" UNC/BSW (unconfirmed) threaded section about 1/2 “long at the top, with a 5/8” round middle section (no thread), followed by another threaded section which might be either 1/2" UNC/BSW or again 3/8" UNC/BSW.
The top end of this Special Stud is screwed into the Centre Pillar and the larger 15/8" boss goes through the body and is used to guide the Special Nut BD.4696 to a correct position. Then the Special Nut is tightened.
Does anybody have a picture of these parts?
Dimensions would be welcomed, more in particular what the thread size of the lower section is (Viart mentions 1/2" BSF).
I can order a new “Special Nut” BD.4696 (not cheap!) or “restore” mine back to original. The Special Stud (as described by me) isn’t listed in the SPC nor available from the various suppliers.

This page from Coventry Auto includes a exploded view that may help you visualise it better yourself. It did for me.

After looking at this and the spare parts catalogue curiously neither list the double ended stud as separate parts but in Cov Autos blurb and diagram it appears to be separate. Maybe they can provide just that part.

Yes I’ve seen that page and it’s also the reason why I referred to the possibilty that the lower part of the stud may be 3/8 UNC or BSF as the stud Coventry shows is symmetrical. But Viart refers to 1/2" BSF.
So I’m looking for someone with pictures of these parts.

Mine is 1/2 inch and I didn’t see the threaded part as removable from the rest. Can’t find it immediately.

This is the picture as used by Coventry in the UK, as referred to by Jason. But I don’t know whether this shows the actual construction. 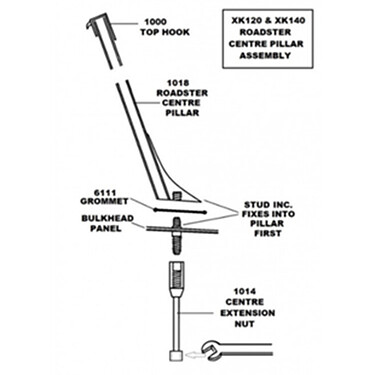 So your “Special Nut” has an inner thread of 1/2" BSF; good to know. I assume that the threaded section only starts about 1/2 inch below the top and that the first “chamber” has an inner diameter of 5/8 ".

And here is the version from SNG with a separate “stud”. Don’t know whether this is “for replacement only” or whether the stud in the original Centre Post BD.3014 can also be removed/replaced. 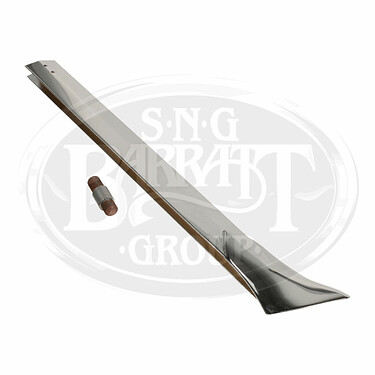 I am absolutely sure that studs were cast into centre pillar originally.
There was never a grommet under chrome to paint and defintely not a grommet with a little bead around edge. What there was, was a soft rubber putty type stuff on bottom of pillar which spread out same stuff used on XK door handle and badge bars and other locations

Agree that the “stud” is probably a modern addition for replacement pillars. I know the rubber pad is also a later addition but I decided to use it as otherwise the paint will be damaged and I also would like to drive the car without the standard windscreen, using the Racing Screen + Mirror Cowl.