Don’t know whether anybody has tried this before, but I want to try and route the twin pipe exhaust through the center chassis cross beam instead of under it.
For that reason we have investigated the maximum opening that can be achieved, replacing the existing single pipe hole. We’ve used the same diameter pipe but added two flat sections.
I don’t think the strength of this chassis part will be affected as everything has been welded through and through.
The opening we now have is about 3 x 6¾ " (or 95 x 150 mm). The minimum required space (width) for the 2 down pipes is about 5¼" (134 mm) with an inch between the pipes, so (worst case) I may have to reduce that space a bit.
I’ve seen (too) many issues with the routing of the exhaust pipes under the chassis, so I thought to do it “the way Jaguar should have done it 70 years ago” on the SE (M) versions of the XK 120.
Will keep you posted. 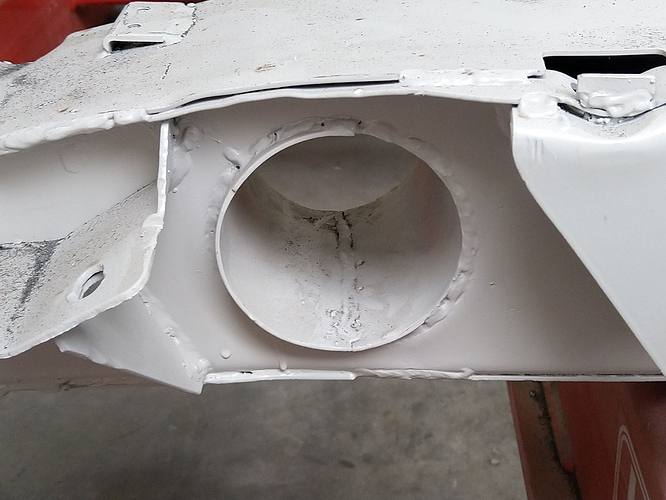 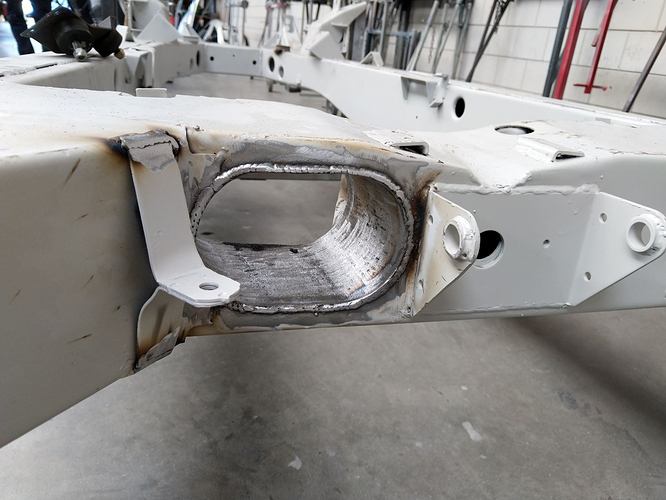 On all XK’s the exhaust goes through the chassis.
early single exhaust had only one hole.
Later all had 2 holes in the chassis, in that case the dual exhaust from sngbarratt and others will fit without any modification. 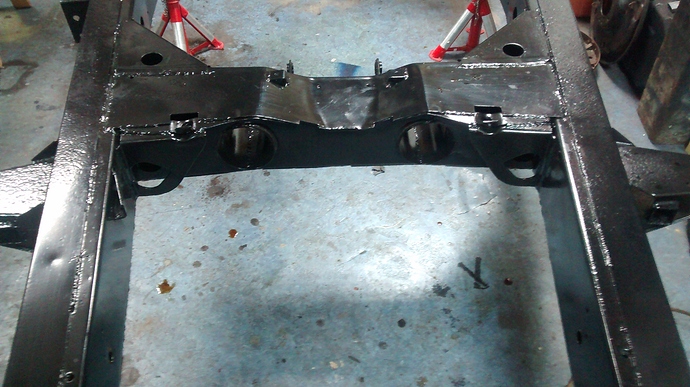 Here an example of my xk140

The Special Equipment version of the XK 120 OTS (and the FHC for a while) had the twin exhaust system with twin down pipes connected to a single “straight through” silencer with two separate internal pipes.
The versions you mention with twin exhaust used two separate silencers (left and right) for which two holes had been made in the chassis cross-member.
So the problem as described for the XK 120 SE is totally different. Jaguar didn’t provide a solution other than routing the down pipes under the chassis cross-member and not using the existing hole at all.

Good looking solution to the inherent low ground-clearance problem of the SE exhaust system.
You may need to do some bending of the standard down-pipes to get the desired alignment with the new opening.

I’ll have to bring the (twin) silencer to the level of the standard (single pipe) version and then work out the various pipe connections. The exhaust brackets at the front and the rear will have to be modified as well, but the suspension points on the chassis can still be used (I guess). 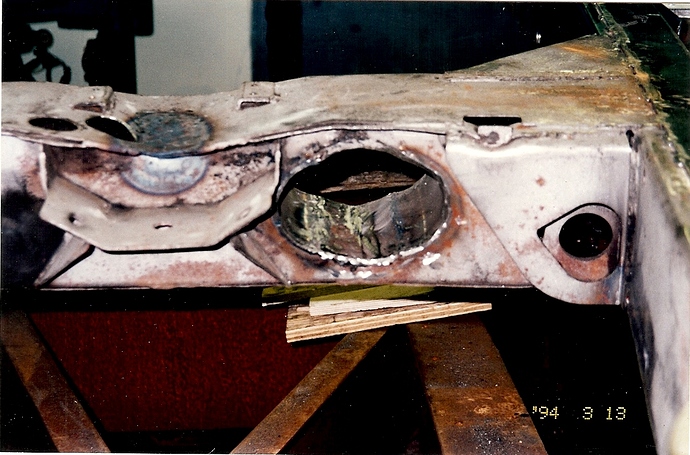 If it is LHD, be aware that you want to keep the down pipes away from the brake master cylinder.

Ask owners of XK 120s with the twin exhaust system how many times they hit a bump or whatever on the road… Caused by the fact that ground clearance is (according most books) 2" less than normal (but I guess this 2" is even optimistic as the pipes are already > 2" + spacing between pipe and chassis).
Yes, it would be possible to mount a thicker piece of pipe in between through the existing single chassis hole, but I guess Jaguar did their math back in the days and concluded that a complete exhaust system per 3 cylinders was better than a combined construction for 6. Furthermore: it’s all about the fun in finding solutions for these kind of problems…

Thought already that there may have been others with the same idea. Tried to find more info on the car but XKData doesn’t provide more than that it had an accident and is now under restoration. The car is in the UK. Do you know more? In particular what they did with the routing of the exhaust system?

Yes Rob: definitely LHD (originally a car from Omaha, Nebraska with lots of history).
The whole routing will become a bit of a puzzle. I guess the first section of the twin down pipes should have been solved by Jaguar. But then again, I have to modify these pipes as they will be higher in the engine bay to get through the hole in the chassis (instead of underneath it).
I have the twin master cylinder brake system but assume that doesn’t make a difference. But a similar heat screen will be necessary.

Hi Bob,
I have a twin exhaust system on my 52 FHC that closely resembles the original design and mounts beneath the frame and have not had any problem so far (1500 miles) with clearance. I set the ride height at factory recommended dimensions and have the heavier SE spec torsion bars, rebuilt standard Newton front shocks, and standard Girling lever shocks on the rear .

We have had made and fitted seceral sets of full an exactly correct twin comp system helped by the fact I got most of a system imported in 1952 for 660560 the owner finding out that living in Clare Sth Australia where the road to Adelaide was generally gravel it was unworkable so he sold the car and brought a MKVII and fitted it that. When he sold the 7 he put original system back on and in around 1985 when I purchased a MKVDHC from him the twin system was still sitting in the bottom of the workshop pit (hole in ground to be able to work on car) with it came two rear pipes but made of copper it appears a common material in the 50’s for a different sound anyway I will use these on one of my cars oneday! I subsequently got another almost complete system from s676046 no rear tail pipes. Armed with all this I was able to have made perfect Mufflers and front pipes all hand bent with black sand in side etc etc
We have fitted one system to an XK where owner didn’t want twin system going under chassis didn’t want hole enlarged so pipes going through were slight crushed oval/elongated shape.
terry

Yes the welding looks a bit rough, often does on a photo, looked better when powder coated. Ok for the job at hand, race car for the XK Challenge series early 2000s, many a bang !!!
Has the metal welded in fallen off to your knowlege? If so better “up
my game”.
, Pipes through the chassis center, silencer dangling and those tail pipes so untidy from behind, so a different route with S680466.
Your comment re my welding has me worried, do you think this lot will hang together ?
BTW you posted a query re 120 doorhinges, I posted a possible/ probable reason for the different hole spacing, not worth a reply from you. 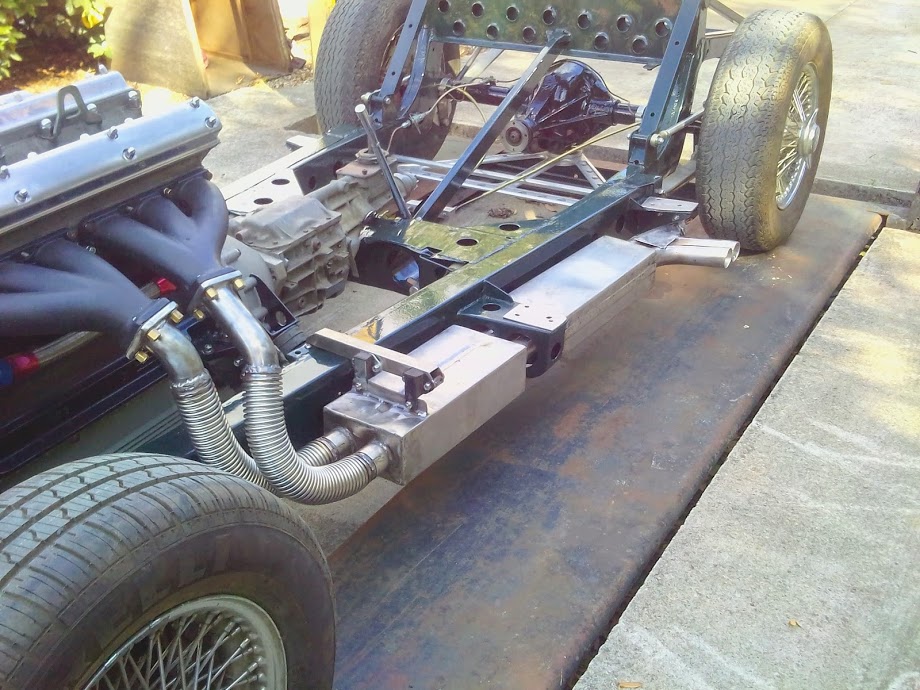 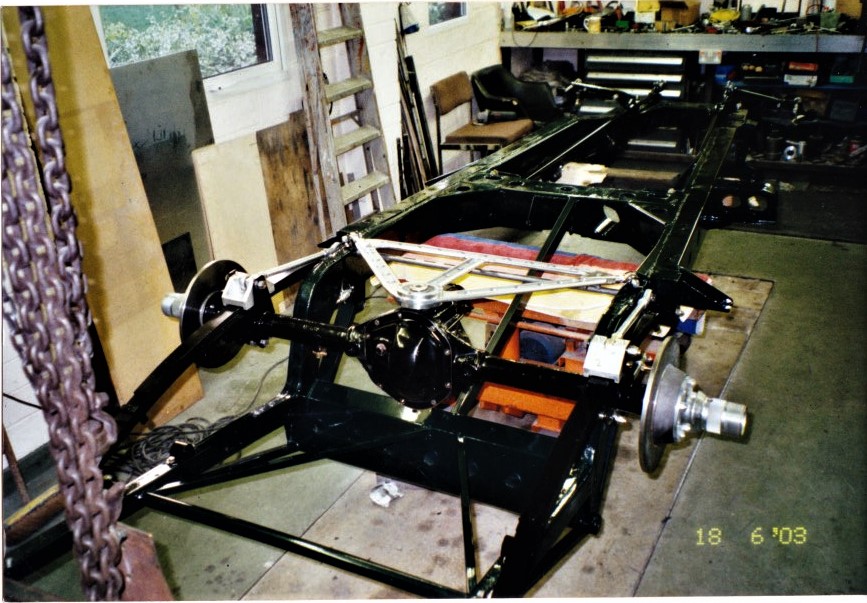 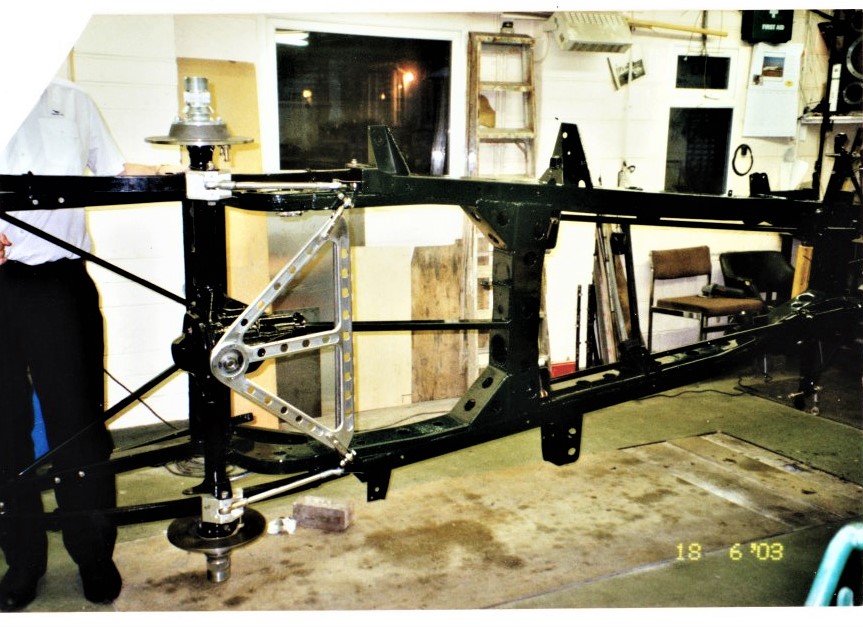 When I owned 660864 in the mid '70s, it still had the proper C-Type cast exhaust manifolds, and SU H8 carbs (it was raced a lot in NZ in the early days). The twin tailpipes exited in front of the LH rear wheel rather like Peter’s one pictured above. I don’t remember the silencer arrangement. The picture here was taken decades later, but I do remember getting the manifolds molten aluminium sprayed, so they ended up looking white. It was one of the best coatings for exhausts around at that time.

Searched for photos showing the exhaust Bob, but no luck.
I fabricated the front pipes useing pipe into pipe joints instead of
flange joints. Silencer is / was a stainless Burgess copy and tail pipes also in stainless.
Couple of photos showing the body being mounted, and the all syncro box mounted to a XK bell with no rear mount for the box , due to the addition of rear engine mounts. Clutch operation is hydraulic. Pedals were later changed to floor / bulkhead twin masters plus clutch master but not by me. 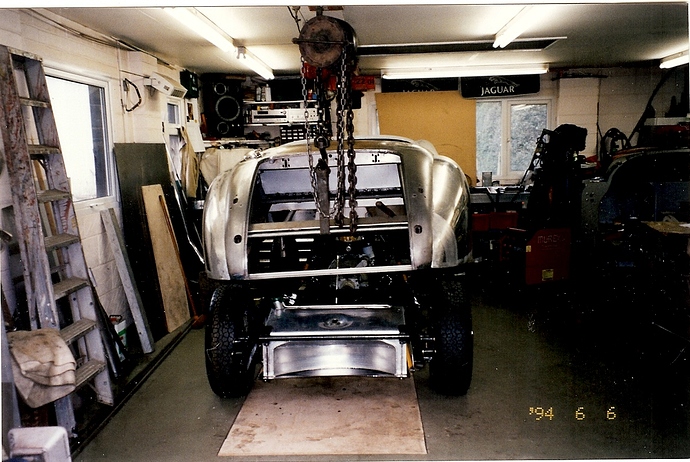 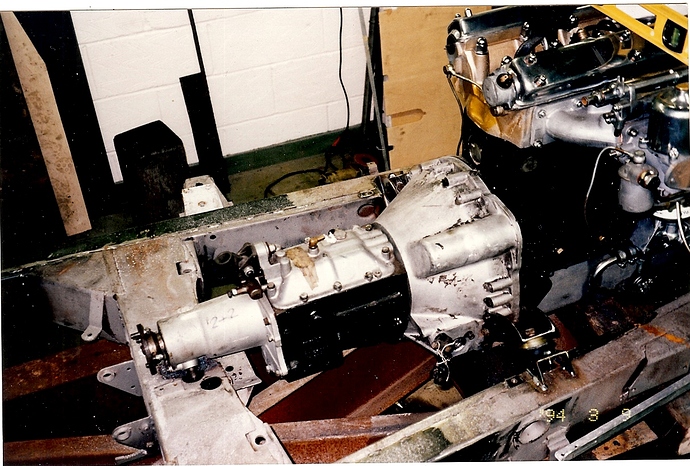 Thanks! You’ve used a stainless silencer and tail pipes. I came across a (2001) contribution from Bruce Cunningham regarding the “attractiveness” of mild steel twin pipe exhaust systems for the XK 120, which I would like to share with other interested readers, including Nick and other “non-believers”. I think the best title for this contribution would be “The sound of music”.

One of the characteristics that creates the unique twin-pipe XK sound is the fact that you have a split manifold which produces essentially two three-cylinder engines singing in harmony. With the pipes formed to create equal length paths for each set of three cylinders, the harmony is two identical frequencies that are 180 degrees apart in their wave forms. The two-in-two-out muffler with straight through pipes on each side allows some mixing of the sounds which enriches the sound before it exits the tail pipes. This music quality cannot be duplicated in a system that has both exhausts merging into one pipe prior to exiting the system.

The sound waves produced by the exhaust valves aren’t sinusoidal: it’s the complexity of the wave forms that creates the richness and uniqueness of the sound quality. Air vibrating in a pure sine wave has a very bland sound. Example: piano strings are three to a key and are tuned slightly out of tune with their mates to give each key a richer quality.

The first resonance point is at 1600 rpm (where the peaks are at the end of the pipe as the wave`exits). The next is at 3200 (the next octave) for six cylinders and at this point there is a harmonic present as this is the resonance point for each of the 3 cylinder sets. There’s a really beautiful sound at 2400 (midpoint between 1600 and 3200) rpm where the sound swell slightly with a pleasant mixture of harmonics. This is about 53 mph where I tend to drive just for the sound - it’s almost like cruise control as my foot tends to adjust the speed for the sound almost automatically.

Listening to the various crescendos and diminuendos and the multiple harmonics throughout the range is a big part of the joy of XK driving.

peter, sorry If I had realised it was your own work certainly wouldn’t have commented and certainly agree after cleaning an painting it would have looked a lot better.
As to your latest idea S680466 somthing similiar has been done to 669031 excepting they have cut a a hole through the chassis rail below mufflers to bring normal manifolds and pipes from inside to outside the chassis! not over the top as you have done