The transmission in my XK 140 matches the original specs (CR with overdrive) but it is a bit of a Frankenstein monster. The shift mechanism is from a 140 but the box and overdrive are from a Saloon. I need to confirm the distance the round output casing casing should sit above the chassis cross member with a true140 setup. As shown in the photo below, my overdrive casing does not have the wide flat platform on the underside that a 140 overdrive unit would have. 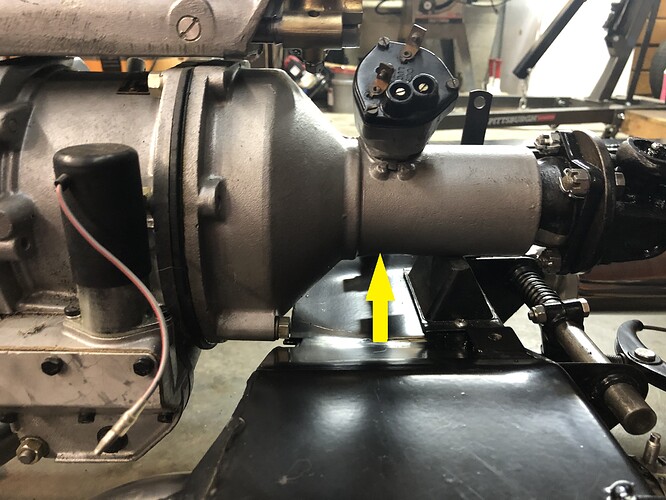 Well, that was a bust. Let me try it another way. Can anyone tell me if the broad flat surface on the tail piece of a 140 overdrive (see photo just below speedo drive) rests on the rubber buffer mounted on the cross member? If it does, can you tell me how much lower the bottom surface of this area is than the round tail piece? Again, I don’t have that flat area on my overdrive unit so I am trying to make sure that the output shaft sits at the correct height. Any help is appreciated. 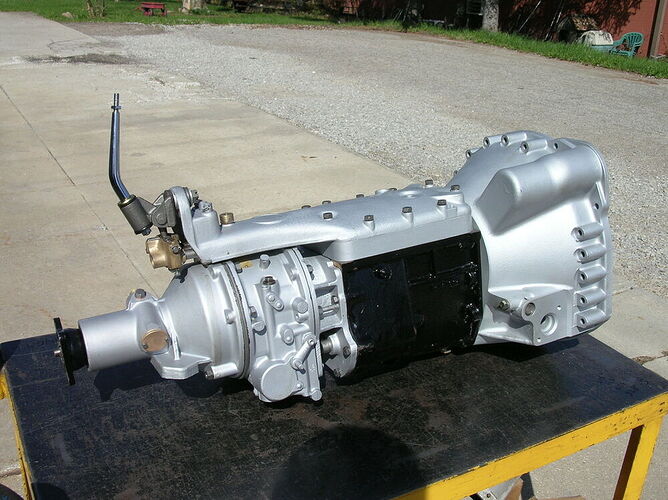 Not having a 140 I am not sure about this, but you have two front mounts and two on the bell housing, which control the position of the engine/gearbox relative to the chassis. So the fifth rubber is a secondary bump stop, which does not come into play unless there is extraordinary movement of the engine. So with a Mark VII OD you have more clearance there than with a 140 OD.
Are you concerned that you have too much clearance?
BTW that Lucas device on the tailcase is a centrifugal switch for a governor control, used on Mark VII.

I have the mark vii od in my 120 but I am pretty sure the chassis crossmember is slightly further back in a 140.

Am I right in assuming you want someone with a 140 to give you the height above the crossmember to the centre of OD output shaft so you can see if your geometry is going to be the same.

Matt, That is correct. I have the engine in a rolling chassis now (finally) and it would be easy to add a shim or to cut down the buffer to get the correct geometry. Not so easy once the body goes back on.

I agree with Rob’s comments generally, but the tail of the overdrive does rest on the buffer and the rear engine mounts seem more compressed than the front mounts. In a non overdrive car the transmission just hangs out there on a 140 without additional support But the overdrive adds a fair amount of weight. When I lifted the engine, tranny and overdrive on a hoist, the center balance point was at the spark plug for cylinder #2. So the center of balance was between the engine mounts but quite far aft. That is probably why the rear mounts are more compressed.

If you look at the photo of my setup with the original post, you can see that the rubber buffer on the crossmember is close to the rear of the overdrive. It doesn’t look to me like the flat area on the 140 overdrive would even reach the buffer unless the whole unit is longer than mine. But I am hoping someone can tell me so I don’t have to guess.

I know it is apples and oranges but from photos I have and having just roughly measured my rear mount the bottom of the OD would be level with the chassis.

The rear is held to the rubber mount with a large pipe clamp. 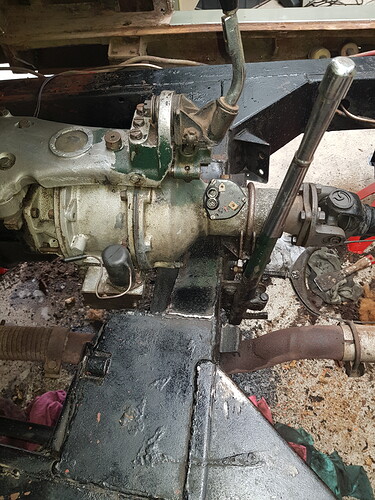 Correct…the flat “mounting boss” does not sit on the rubber bumper. The bumper sits farther rearward and the rounded portion of the tail of the O/D would contact the bumper given certain conditions. In other words, the bumper is not always in contact with the tail housing but does come into play during excessive movement of the engine/tranny assembly…at least, that was the observed geometry when I disassembled my unit.
My original bumper was slightly dished from periodic contact, while the new bumper is straight across on it’s upper surface.

Interesting. I am not sure what the purpose of the “mounting boss” is if it is not in contact with anything. The rounded tail of my overdrive is in firm contact with the rubber buffer, not simply floating above it. It is interesting that in Matt’s application the tail is locked to the chassis with a U-bolt. When the E-Type came along, Jaguar decided to use a spring mount.

For what it is worth, earlier posts on the forum indicated that a 140 chassis would have to be modified to use a saloon overdrive. I did not find this to be the case. The only problem I encountered was with the speedo drive. It is positioned down and to the right on a saloon, rather than up and to the left on a 140. I had to shorten the drive so there was sufficient room for the angle drive. I also had to leave the centrifugal switch in so there is a bushing to capture the top end of the speedo drive gear. Otherwise, it is not operational. I may need a longer speedo cable, but the chassis did not require any modifications.

Matt’s also appears to be from a Mark VII saloon with the centrifugal switch.
The 120 does not have mounts on the bell housing, so a mount of some kind on the tailcase was needed.

I didn’t realize the photo was from a 120. Does that mean the chassis was modified to accept the overdrive?

Yes, he said that earlier. An OD box cannot fit in a regular 120 chassis.

Weighing in a little late … you have probably already made a decision and moved forward. I have a 140 FHC that was originally an automatic and I have put a Mk7 gearbox in it. I was told the transmission and OD unit were both MK 7 … but now that I read the posts above I think the OD unit might be from a MK2 or similar.

There’s a jag specialist near me that talked me through the install. Similar to you, the installation of the engine/gearbox was a pig because the balance point is so far back in the engine with the OD mounted. Once in I had nice clearance on the OD from the cross member initially. He told me that despite the rear mounts designed to keep the rear of OD unit off the rubber bumper on the cross member (eg bumper is for those occasional situations when a pothole causes an impact, not support), in practice the rear mounts compress and he told me than 99.9% of the cars that come in have the OD sitting on the rubber bumper. Similar to your experience. The only downside (per the mechanic) is that the transmission transmits more vibration directly to the cross member which you may feel when you drive it.

You’ll see from the photo that my OD unit has a flange that is just above the cross member. I cut the bumper in half to give myself about a half inch clearance. I also put some extra shims behind the rear engine mounts to get more clearance. After 6 months in the garage things have settled and it now rests pretty much on the bumper. (that’s a roll of electric tape that fell into the photo…sorry)

If I were doing it again I would make sure I have the newer rear engine mounts that resist compression better, and I would give myself at least an inch clearance once things have settled down a bit. I also cheated by installing the rubber bumper with self-tapping hex-head screws so I could get it in and out with a wrench if I need to.

The other interesting complications in my case: My OD solenoid was horizontally mounted and I had to buy a kit to put it in the vertical position. The speedo drive doesn’t have as much clearance as I’d like, but since I’m resting on the bumper now I am hoping it will be fine. Fingers crossed. 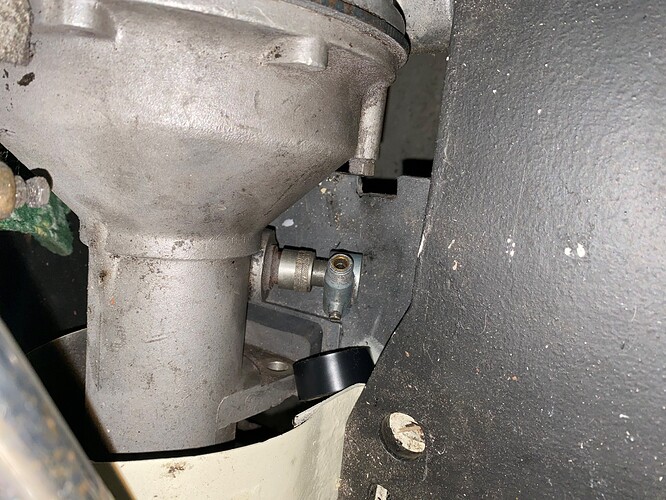 Hi Scott. Yes, that two-bolt vertical flange on the rear does indeed indicate it is from a Mark 1 or 2.

I considered grinding the flange off, but then realised the flange provided a better match to the surface of the rubber bumper so I left it. thanks for the confirmation.

Thanks for the input Scott. I cannot budge the overdrive off the rear bumper so I don’t see how it would ever “float.” Even if I cut it down, as you did, it seems like that would put significant weight on the rear engine mounts and lead to possible failure. I think I will just leave it as is and keep in mind your warning about possible vibrations transmitted to the chassis. If that happens, at least the bumper is accessible and further fiddling is possible.