Same on my XK120😁
Mike told me to use a direct - line ( have still pos earth) to solve that problem. Did not found the eager to do it so far, so dont know if it solves. Perhaps you are faster in testing that.
Thomas

Thomas,
I did actually monitor the voltage to the clock directly at the clock terminal with a volt meter while driving to make sure 1) The voltage remained constant. 2) To be sure the charging system (original generator - positive ground) was not over charging and causing a problem with Mike’s circuit board. The results were no lapse in current and 12.2v to 13.6v. I have a 12v jumper box with an accessory outlet and my next step will be to connect it directly to the clock and a suitable ground with the lead for the clock from the harness disconnected to isolate it from the car electrics completely and see what happens. I am not hopeful but I will post the results. Thanks for your response, James.

Thomas,
Supplying the unvarying 12v supplied by my jumper box allowed the clock to keep accurate time during an hour long drive. I then reconnected the clock to the the harness wire and it stopped while driving again. My low impedance volt meter showed the same range (12.2 to 13.6v) so my charging system is not over charging, so I am leaning towards a voltage threshold issue with the circuit board.

If anyone has a problem with a clock that I upgraded, please send it back with an explanation of the problem so I can make it right.

Here’s a story: One customer’s clock worked fine when the car was parked but ran erratically when the car was driven. Luckily I had access to his car, so I started doing some voltage measurements. I measured the voltage on the clock while the engine was running and it was varying all over the place. Then I rested the digital voltmeter on the fender in preparation to do other measurements and saw that the reading was still fluctuating, even though the meter’s test leads weren’t connected to anything at all. It should have been a steady zero but it was reading plus, minus, all over the place. It read zero when he shut the engine off. His ignition system was radiation so much RF than no electronic device would work anywhere near his car. The clock has a computer inside it, and a lot of suppression circuitry, but it wasn’t up to the task in this case. Since he didn’t have a radio and was not interested in suppressing his ignition system I suggested he run a wire directly to the battery for the clock. That solved the clock problem. Hopefully he will never need a pacemaker.

I am somehow not surprised. I had my (now sold) E Type and my faithful (since 1964 TR3. As time went by, on both cars, I always selected ignition components (especially coils) which were the highest voltage I could get believing it was always better. Then I began having problems, coil tower to distributor "burned off . I apparently had tracking from the tower to the 12v connection point. I had lots of cross firing and had to be careful how I routed wires. Then , I switched back to stock coils . No more mysterious ignition troubles.Do you suspect this RFI caused by 50+ kv coils Mike?

Michael,
Thanks for the reply, the RFI is something I haven’t considered however my car’s ignition system is stock, perhaps not OEM but a threaded cap style coil which was not new when I bought the car 30+ years ago the ignition leads are standard 7mm
copper core with 90* champion spark plug connectors. No radio obviously.
One point about my voltage readings, these readings were the range during driving, slowly changing within that range depending on the engine speed ie. generator output and not fluctuating erratically. If this is an RF issue perhaps my self contained 12v power supply acted as a suppressor to block the interference.
What I don’t understand is how a separate wire run directly from the battery to the clock unless it is shielded would make any difference. Interesting problem.
Certainly not a critical issue but when one spends many years sorting out an old classic it’s nice to have everything working as it should. If I really need to know what time it is I can refer to my cellphone which I always have with me in the event that ancient ignition coil craps out!

Bigger is not always better, at least that’s what I tell my wife.
These problems could very well be caused by non-standard ignition components. My first car was a '58 MK1 and it came to me with an electronic ignition, which could throw sparks across any gap. 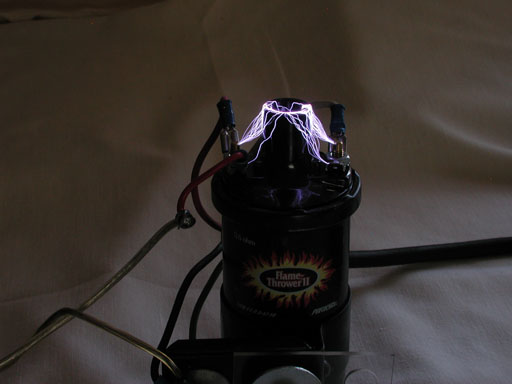 I figured with that much potential I could open the plug gaps to .040". The car ran fine until it didn’t. I started getting cross-firing and carbon tracking inside the distributor. After replacing a couple of caps it dawned on me that perhaps the extra voltage developed across the bigger gap was causing the problem. I gapped the plugs back to .025" and everything worked fine. Well, at least the ignition was fine.
The coil in the picture is a 0.6 Ohm coil, which theoretically would charge up with 20 Amps. All that energy needs to go somewhere when it discharges. You can see in the picture where it goes when there is no load on it. The plugs need a certain amount to fire but more than that is wasted and goes to generate RF and cross firing as it seeks the next easiest path.

Hi J.E.
The original wire to the clock is buried in a harness with a bunch of other wires. High frequencies can go right through insulation and into other wires. That is how radios work. The new clock wire was routed under the carpet and directly to the battery, so there were no other wires anywhere near it.
Your 12V power supply was separate from the car’s power and running directly to the clock, so it was clean.
You paid to have a working clock so you should have a working clock. I’d like you to send it back to me when it’s convenient to you and let me see what I can do with it. I can torture it with a Model T spark coil. Your situation can’t be any worse than that!

So much for THAT theory then! I’ll be interested in what Mike Ech comes up with.
Mike Moore

Mike,
I appreciate the offer, I will first try your suggestion of a dedicated wire sourced from the cars battery rerouted to avoid EMF interference. If that doesn’t work then I will take you up on that. I have looked through all of the posts pertaining to clocks on this site and others and no one has mentioned this as a problem.
I have experienced issues like this on cars with ECU’s where there are voltage issues, either too high or too low, which are outside of the upper and lower thresholds of operation, as well as crumbling wire insulation within the harness, especially under the hood, where current carrying wires induce sensor wires to send implausible signals to the ECU. At least there you have fault codes to help with the diagnoses. Thanks for your advice. Jim.

Hi J.E.
The original wire to the clock is buried in a harness with a bunch of other wires. High frequencies can go right through insulation and into other wires. That is how radios work. The new clock wire was routed under the carpet and directly to the battery, so there were no other wires anywhere near it.
Your 12V power supply was separate from the car’s power and running directly to the clock, so it was clean.
You paid to have a working clock so you should have a working clock. I’d like you to send it back to me when it’s convenient to you and let me see what I can do with it. I can torture it with a Model T spark coil. Your situation can’t be any worse than that!